Check Out The 10 Coolest Minibikes of All Time

Minibikes are so cool that we figured coming up with a list of the 10 coolest minibikes of all time would be a tough task.

After all, there aren’t too many experienced dirtbike riders who didn’t cut their teeth (and knees and elbows) on some sort of small-wheeled motorcycle before graduating to larger, heavier and faster machines. Think back to some of the coolest bikes you’ve ever ridden, and chances are good that you can come up with at least one good story involving a minibike.

The trick, here, then was to come up with a list of the 10 coolest minibikes of all time that encompassed about 50 years of minibike history. Thus our goal was not to focus on one era or one category of minibikes, but take a look at the history of the category and come up with some truly representative examples. Frankly, we think we nailed it, but that’s just our opinion.

So check out our list of the 10 coolest minibikes of all time and see if any of these bikes stirs up a memory in you. Several of them sure did for us. 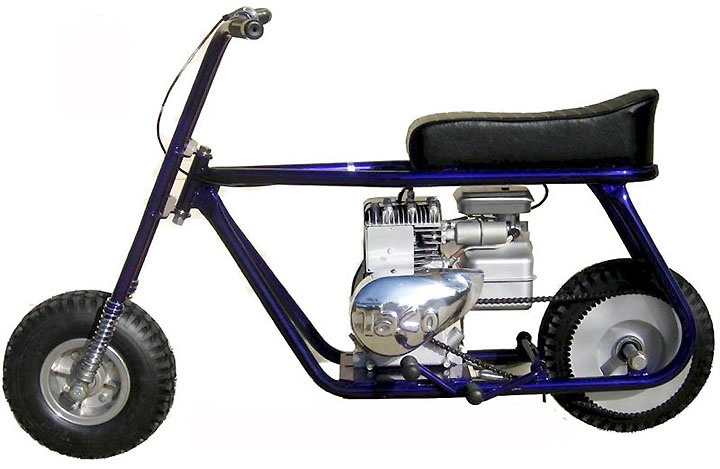 Formed by former ISDT competitor and aftermarket dirtbike chassis builder John Steen, Taco was at the forefront of the “kit” minibike scene that shadowed the karting craze of the 1960s. Customers could purchase the frame kit from the Southern California-based company and add a basic lawnmower engine to produce a spritely little mount that was tons of fun. However, its lack of rear suspension meant that you didn’t want to jump the Taco higher or longer than your average half-gallon milk carton (later Taco models quickly corrected this slight design flaw). Its rub-a-scrub rear brake and complete lack of a front brake also made for some harrowing experiences at anything above 5 mph.

Although it was tilled under by much higher-quality OEM-produced minis at the dawn of the 1970s, Taco never really went away. Its intellectual rights passed here and there before Taco enthusiast Joe Rivello got hold of it and established Taco Motor Sports, returning the brand to its birthplace in Southern California. Today, Taco produces faithful recreations of the original models, making it a fun option for those who want to reminisce or experience what one of the 10 coolest minibikes of all time was like.