The top 10 worst dirtbikes of all time? Wow! Where does one start? Surely not with the current crop of dirtbikes. You would be hard-pressed to find a genuine lemon among the latest and greatest machines in the sport. However, during the early dirt bike boom, which started around 1970, there were a lot of crappy models being foisted off on an unsuspecting public.

So, after considerable thinking (about 10 minutes), I’ve decided to limit the selection to worst dirtbikes that I actually tested–often with excruciating mental or physical consequences.

First, let’s set the ground rules for our worst dirtbikes list: A truly bad bike will have few–if–any-redeeming values. There have been great-handling bikes with fragile engines and transmissions. There have been powerful machines with less than stellar handling, and then machines with a bit of both. The real losers, though, are those with more faults than virtues. Machines that will spit you off for no apparent reason. Or bikes that are so dull and listless that you’d rather be riding in a Buick station wagon with the windows rolled up. Then you have dirt bikes that have all the reliability of a candle in a windstorm.

Throughout the years, I have fallen in love with many flawed machines that I would still consider to be great bikes. The Maicos of the early and mid-’70s are prime examples. These German machines required a great deal of prep, setup and TLC, but when they were dialed in there was nothing else that could run with them. Riders put up with a wimpy primary chain drives, reluctant clutches and bogus ignitions just to get a taste of a Maico’s oozing power and graceful handling. You could maybe make a case that the single-shock Alpha Maicos deserve worst dirtbikes status, but there are still plenty of machines that rank (no pun intended) far ahead of the Alpha.

Think about the CZs of that same period. Heavy. Crude. Poor shocks. But almost unbreakable. 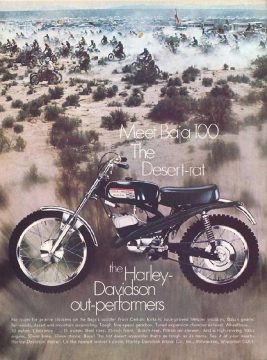 How about the various Spanish bikes? All built from inferior materials, but they were speedy and handled like magic. Those who took the time to learn how to live with them were rewarded with stunning handling and correct powerbands. Novice riders who bought the Bultacos, Ossas and Montesas of that period ended up pulling out their hair by the handful, promptly sold the strange beasts and then bought reliable Japanese mounts. Then we had the off-brands: Puch, DKW, AJS, KTM, Penton, Sachs, Greeves, American Eagle, Rickman, Rokon, Harley-Davidson, Steens, Bridgestone, Bronco Apache, Chaparral, Carabela, Cooper, Monark, Zundapp, Yankee and a few others that will probably come to mind later on.

And then there are brands that deserve worst dirtbikes recognition because they “boast” technical innovations ranging from the strange to the downright stupid. Consider the following:

–The Bridgestone Hurricane Scramblers of the late ’60s and early ’70s had a rotary shift pattern that was bizarre beyond belief! You would shift up through all six gears, then when you hit the shifter one more time it would go back to low gear. Imagine the surprise when the rider was in top gear, all tucked in and howling down a fire road, and snicked the lever one more time, only to be greeted with low gear and 11 million instant rpm!

–Rokon came out with the first automatic trans (actually, a torque converter) with the power delivered via a rubber belt. This beast also had to be started like a lawn mower; you had to pull a stupid rope. When it got hard to start, you would be sucking wind in a hurry. When that torque converter belt got wet, it would slip and smoke like a worm on a barbecue.

–Greeves found out that the kickstarter would not clear the footpeg when starting, so you had to fold up the peg by hand and hook it onto a restraining ring. Nice touch. 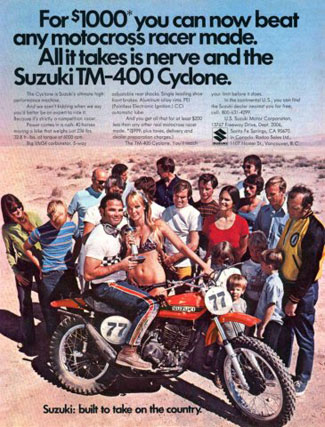 –Numerous Euro bikes came with paper filters. When the engine backfired, the premix would saturate the paper and it would pass about the same amount of air as a can of peaches. If you rode through water, your ride was over. Gag, puke, cough, wheeze.

–The IRZ carburetor. It came stock on Ossas and was virtually untunable. This wretched carb had two needles and two completely separate fuel circuits. Taking it apart required the patience of Job and the hands of a brain surgeon. Putting it back together was even worse. Jets were expensive and nearly impossible to find. Some fun.

–Hatta forks. They came stock on various Kawasaki “enduro” bikes. The ads billed them as “101 ways adjustable, unfortunately, none of them were correct. Mr Hatta designed landing gear for bombers during World War II and was quoted as saying, “It’s easy to make a suspension for a bomber. It only has to stroke once. A motorcycle is confusing. It has to stroke numerous times.”

But when all things are considered, the list of true duds is crystal clear. The following is a compilation of worst dirtbikes that meet all the requirements for what makes a truly bad dirtbike. It’s based on frightening traits, unreliability, poor handling, mechanical woes, dumb engineering, freaky response and a riding feel that is the polar opposite of fun. So, here goes: The top 10 worst dirtbikes in history

The head engineer, Reuben Helmen, designed this initial entry of our worst dirtbikes list at the urging of his cousin- who he promptly disowned. This bike was 35 pounds heavier than previous Huskies, worlds slower, had an awkwardly spaced gearbox and a stupid power curve. It also had ancient Girling shocks that loved to puke seals and forks that had more metal shavings than fork oil in each leg. The exhaust burned your leg, brakes were gruesome, and shifting was ugly. It also seeped mung and drool out of every gasket surface. Handling was best described as spooky. The engine pinged like it was running on kerosene, and items fell off the bike like they were held on with Scotch tape.