A strong field of contenders in both the 450cc and 250cc ranks should make this year’s Lucas Oil Pro Motocross outdoor season one to remember. 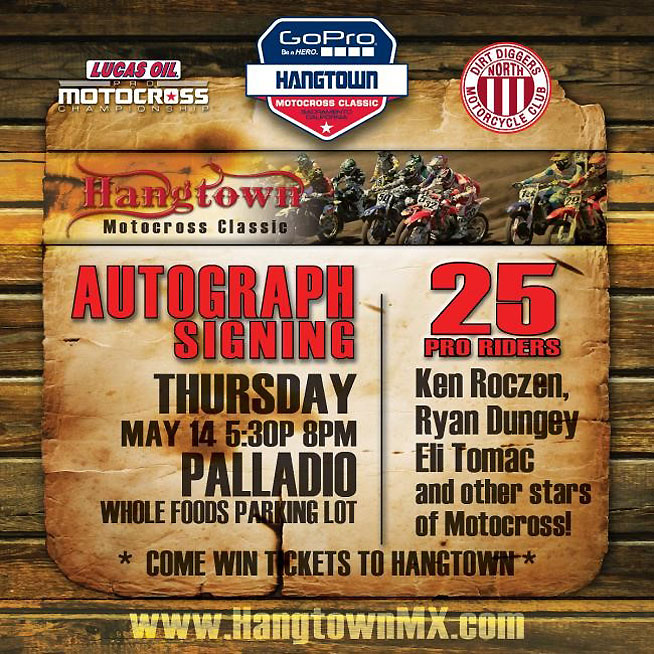 Leading the premier class into action and carrying the number one plate will be Ken Roczen, the series’ first ever German champion in 43 years, aboard his RCH Soaring Eagle/Jimmy John’s/Suzuki. Last year, Roczen waged an epic battle with his then Red Bull KTM teammate, Ryan Dungey. The title fight came down down to the final lap of the season with Roczen beating the more experienced Dungey to claim the championship. In the 250cc class, Yamalube Star Racing Yamaha’s Jeremy Martin carries the Lucas Oil 250cc Pro Motocross number one plate into battle.

And there will be others, including GEICO Honda rider Eli Tomac, who finished second to Dungey in the 2015 supercross series. Known for his aggressive training program, Tomac should have the speed and stamina to win motos and contend for the title.

Former series champion Chad Reed, who will compete aboard his own Discount Tire Racing/TwoTwo Motorsports Kawasaki team, is also expected to be a contender Chad Reed. At 33, Reed is the veteran of the series, and he proved that he is still capable of winning by earning a win in this year’s supercross series.

The Joe Gibbs Racing owned Autotrader.com/Toyota/Yamaha effort will feature teammates and rivals Justin Barcia and Weston Peick. Of the two, Peick is perhaps the most improved rider in the premier class in 2015. He enjoyed best supercross season finish of his career in 2015, and he is known more for his talent outdoors than in stadiums.

Team Honda HRC’s Trey Canard cannot be counted out as a title contender. After suffering multiple injuries that have stunted his career growth, Canard broke through to become a consistent front-runner in the 2014 Lucas Oil series and claimed the first win of his career at the season finale in Utah to lock up third place in the series. Canard suffered another setback when he suffered a broken arm suffered late in the supercross series, but he is expected to return to action soon. Meanwhile, AMA Supercross Rookie of the Year Cole Seely should be more than able to contend for wins and rack up series points as he aims to bring the outdoor title to Team Honda HRC. Seely has yet to win an outdoor national, but that may change as he enjoyed an excellent supercross season that produced a round win.

Suzuki has more than just Roczen as a title contender in its camp. Roczen’s teammate, RCH Soaring Eagle/Jimmy John’s Suzuki rider Broc Tickle is returning to the outdoors after missing all of last year with a back injury, but he has fully recovered, and he proved himself with a fine eighth-place series finish in supercross. Team Yoshimura Suzuki’s Blake Baggett is a former 250cc Champion and will enter the 450cc class as a rookie this year with high expectations.

The Rockstar Energy Husqvarna Factory Racing effort will feature former 250cc West Supercross Champion Jason Anderson as the the lead rider in Husqvarna’s much-anticipated return to the outdoor series. Anderson showed impressive speed aboard his factory Husky in supercross, finishing as high as second at the Anaheim I Supercross. Anderson trains with Ryan Dungey, and he will undoubtedly have picked up a pointer or two from the former series champion. Former World MX2 Champion Christophe Pourcel of France joins Anderson as a late addition to the factory Husqvarna team for the outdoor series, bringing a wealth of experience from the 250cc class. He could be one of the real “sleeper” contenders in the 450cc ranks in 2015.

250cc
Martin will be forced to defend his 250cc title Class crown against a field of young contenders that is just as hungry as he was in 2014, but if his past record is any indication, he won’t make it easy on any of them. Ghe Minnesota dominated the first half of the 2014 campaign with a perfect four moto wins through the first two rounds, setting the tone that would ultimately land the championship. He finished the summer with a top-10 finish at all 12 rounds and scored five overall wins en route to the title. Martin is hoping to become the first rider to back-to-back 250cc National titles since Ryan Villopoto (2007, 2008).

Perhaps Martin’s toughest challenger may come from within his own team, as Yamalube/Star Racing Yamaha’s Cooper Webb finished third in the championship last year but is coming off a dominant season in the AMA 250cc West Supercross Series, where he won seven of eight rounds to earn his first career professional championship.

Then again newly crowned AMA 250cc East Supercross Champion Marvin Musquin of France, may have something to say about that. The Red Bull KTM rider is one of the oldest and most experienced riders in the 250cc class, and he has the credentials to back it up, having earned back-to-back FIM World Motocross MX2 Championships in 2009 and 2010. The 2015 season will be Musquin’s last in the 250cc ranks as he will move to the 450cc class with Red Bull KTM at the start of 2016.

Other contenders include GEICO Honda’s Justin Bogle, the 2014 AMA 250cc East Supercross Champion. The Oklahoma native scored two podium finishes in last year’s outdoor campaign, and he is expected to prove on that performance in 2015.

Monster Energy/Pro Circuit/Kawasaki rider Adam Cianciarulo may be the real X factor in the 2015 Lucas Oil 250cc Pro Motocross Championship. One of the most successful amateur riders in history, Cianciarulo has shown the speed to be a contender, but he has been plagued with injuries, most notably an injured shoulder that prevented him racing outdoors last season and lingered enough to keep him away from the 2015 supercross series as well.

With or without Cianciarulo, Monster Energy/Pro Circuit/Kawasaki will field a potent team that includes Joey Savatgy, Chris Alldredge and Arnaud Tonus. Of the three, Savatgy has emerged as a consistent podium threat in supercross, and he may capable of similar performances outdoors as well. Alldredge joined the pro ranks at the tail end of last summer and performed well enough to earn a top 20-finish in the series on the strength of just three races. In what will be his first full outdoor season, Alldredge is expected to be a contender for Rookie of the Year honors, and he could be a factor in the championship battle as well. European veteran Tonus is new to the Lucas Oil Pro Motocross Championship, and he is typical of the top European talent that makes the jump to America to compete in the Lucas Oil Pro Motocross Championship.

Similarly, Yamalube/Star Racing Yamaha has hired budding young talent in Aaron Plessinger and Anthony Rodriguez. Plessinger, the son of former AMSOIL GNCC Champion Scott Plessinger, is a former recipient of the AMA Horizon Award, which recognizes potential future stars at the Rocky Mountain ATV/MC AMA Amateur National Motocross Championship. Rodriguez is characterized as having a ton of raw speed, and the Venezuelan rider continues to work on his consistency. He will enter his second Lucas Oil 250cc season with more experience and higher expectations.

Red Bull KTM’s Justin Hill joins Musquin in search of the team’s first 250cc outdoor championship. Hill enjoyed a stellar season in 2014, but 2015 has been a struggle as he has battled with an illness that has sapped his strength. Even so, if he is in top form, Hill should have the speed to be a contender

In addition to Bogle, GEICO Honda brings in sophomore talent Matt Bisceglia, who is expected to improve on the 15th-place season finish that he carded in a rookie season hampered by an injury that forced him to miss multiple rounds. Like Kawasaki’s Alldredge, GEICO Honda’s RJ Hampshire got a taste of the pro ranks llate ast summer by competing in the final three races of the 2014 Lucas Oil Pro Motocross Championship. Hampshire earned his first career professional podium in supercross this year, and he will be looking for more podiums in his first full outdoor campaign. Rookie Jordon Smith completes the GEICO Honda squad.

In addition to Anderson and Pourcel in the 450cc class, Rockstar Energy Husqvarna Factory Racing will field a three-rider effort in the 250cc class. Veteran Martin Davalos is returning from illness and the effects of a broken foot suffered last season, but he hopes to turn things around at the Nationals. Zach Osborne and Zach Bell have each shown the speed to win in supercross, and both riders are aiming to be consistent podium finishers outdoors.