What the top contenders for the 2016 Monster Energy AMA Supercross Championship had to say at their annual press conference at Angel Stadium in Anaheim today.

AMA Supercross may be as mainstream as it has been as any time in its long and storied history.

Heading into its 42nd season, the Monster Energy AMA Supercross Series has experienced a popularity explosion that extends far beyond the live events. According to Fox Sports, television ratings for the series increased by 6 percent in 2015, and within the next month, reigning Monster Energy AMA Supercross Champion Ryan Dungey and his factory Red Bull KTM will be making his way onto breakfast tables across America as the newest face on the Wheaties cereal box.

In fact, about the only thing that could temper the heat of the series opener at Angel Stadium in Anaheim, California, this Saturday night, is the weather. With a 50 percent chance of rain in the forecast, many insiders are predicting that the race could take on the complexion of the 2005 Anaheim race, in which Kevin Windham won the event by surviving a quagmire of a racetrack. The conditions could set the tone for the series, as many insiders will tell you that while you can’t win the championsip at Anaheim I, you can certainly lose it there.

That and more was on the minds of 13 of the top riders who assembled for the annual Monster Energy AMA Supercross Series at Angel Stadium today. Read on to hear what they had to say about Saturday night’s season opener, the upcoming season, and their personal and professional lives. 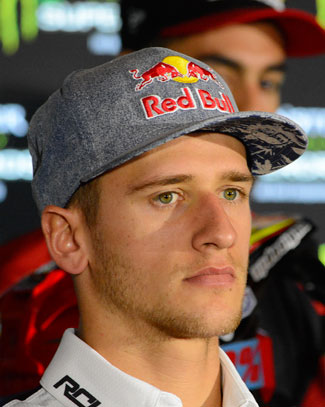 You had a good season going last year. You won the first two races at Anaheim, but then you had injury. Because of the injury, how important was it for you to get the win at the Monster Energy Cup?

I think any win is good. Obviously, coming out to the Monster Energy Cup, I hadn’t ridden supercross in a long time. I went back home to Germany, and we were building my track, and I came pretty decently prepared to the Monster Energy Cup, and won that, so it was big. I would say it doesn’t really matter because most of the riders haven’t really started their training yet, and there is still so much time to finally go to A1, but any win is good. I enjoyed it, and it was goobvub to have, but I think that I just had the greatest off-season I’ve ever had, and I can’t wait to finally get going.

What changes have you made in your personal life to bring a more consistent Ken Roczen to the 2016 supercross championship?

I’ve changed a lot of things. I’ve probably turned 360 degrees. I do have a new trainer, and I’ve probably learned more in the last six months than I have in my whole my career. I’ve just sorted everything out in my personal life, and I’ve just been enjoying everything I do, literally, from waking up to going to bed. I love riding my dirtbike, and I’ve been having so much fun, and I think that’s what makes me feel good. Obviously we are all putting in hard work, but I’m fit and I’m strong, and I enjoy riding my dirtbike. I don’t think there is a whole lot more to say. My family life has been great, better than ever. I’m super-focused, and I’m happy. That’s the main part.