If there’s one thing that Honda knows well, it is how to produce fun, reliable and practical lightweight single-cylinder dual-sport machines such as the 2016 Honda CRF250L.

True, at 324 lbs., with a full fuel load, the CRF250L is no feather, yet it is still able to span large gaps, though they’re more figurative than literal. The CRF250L marries high tech with low cost in an EPA-legal motorcycle that is capable enough to please veteran dual-sport riders while being affordable enough to attract millennials to the sport of motorcycling.

That’s a tall order, but the CRF250L has enjoyed four years of solid sales success thanks to a proven platform that has achieved its design goals. If the CRF250L wasn’t a winner, then it’s doubtful that Honda would waste the time and effort to introduce a new version of the machine, the 2017 Honda CRF250L Rally. 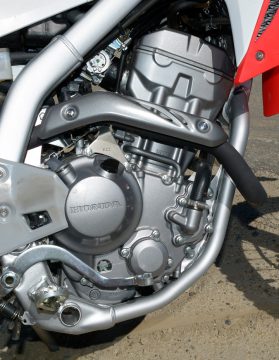 While the CRF250L was technically an all-new model for Honda when it was first introduced for the 2013 model year, its liquid-cooled, fuel-injected, four-stroke single was already a proven commodity in Honda’s successful entry-level sportbike, the CBR250R. The engine displaces 249.6cc via a large 76mm bore and short 55mm stroke. Its compact four-valve cylinder head features dual overhead camshafts and a centrally located spark plug to help fight detonation. Each cam features a single lobe that bumps a forked roller rocker arm to actuate the valve pairs, reducing valve train friction. A shim-over-bucket tappet design makes valve adjustments a snap because the valve shims can be replaced without removing the camshafts.

To further reduce parasitic drag, the piston features a short skirt and is impregnated with a slick molybdenum coating. Light striations on the piston retain engine oil as the piston moves up and down in the bore, which allowed Honda engineers to use lower-tension rings. The CRF250L’s cylinder center-line is also offset 4mm forward of the crankshaft centerline, which helps to decrease piston-to-cylinder wall thrust and free up even more horsepower. A spiny finish on the cylinder sleeve is incorporated to minimize blow-by gasses and reduce oil consumption. The sleeve itself is centrifugally cast, an expensive process that creates a uniform wall thickness that is thinner and lighter than a poured cast-iron sleeve.

The CRF250L’s state of tune differs from the CBR250R’s, however, favoring low-end grunt and mid-range torque for increased tractability. Honda employs a different ECU to control the CRF250L’s ignition and EFI mapping. The CRF250L also uses a different airbox and a new intake manifold that provides a straighter path between the airbox and the cylinder head. The CRF250L’s Keihin PGM-FI 36mm throttle body is also 2mm smaller than the CBR’s, and the L’s head pipe is smaller in diameter and longer overall than the CBR’s to improve low-rpm air velocity through the engine. That said, in completing our due diligence for this story we noticed that the recently announced 2017 Honda CRF250L Rally (and by extension the CRF250L) will get the 38mm throttle body to enhance top-end performance. We confirmed that fact with Honda officials as well.

In an obvious concession to its street heritage, the engine is electric start-only, with no kickstarter back-up. We’re okay with that.

The CRF250L isn’t exactly a powerhouse. Our test unit spun the drum on Chris Repath’s MotoGPWerks.com dyno to the tune of 18.2 peak horsepower at 7500 rpm while delivering a maximum of 13.6 lb.-ft. of torque at 5800 rpm. Still, what’s there is enough to propel the CRF250L down the road or through the dirt at a good pace. The engine is silky smooth and linear, but it lacks punch, forcing our expert test riders to fan the clutch an stir its six-speed gearbox to stay in the sweet spot of the power. It won’t even loft the front end without a vigorous snap of the clutch.

But that’s okay because the CRF250L engine is a willing revver with extremely smooth fuel-injection and a clean and quick throttle response, which helps when you do snap of the clutch and blip of the throttle to clear rocks, fallen logs or other obstacles in the dirt. And, despite its free-revving nature, it has just enough flywheel to deliver solid traction in most off-road conditions. The end result is a power character that is almost certain to instill confidence in off-road newbies and deliver a fun if not blazing fast ride for veteran off-roaders. It’s also very efficient. Honda claims that the CRF250L gets 73 mpg, good for a theoretical range of 153 miles from its 2.1-gallon fuel tank.

And speaking of the transmission, the CRF250L’s six-speeder is also beefier than the CBR250R’s. Its internal ratios are identical to the CBR’s, but the CRF250L boasts wider gears and strengthened shift dogs and transmits power through a two-teeth larger (40-tooth) rear sprocket, which lowers the CRF250L’s final gearing—again for better low-end grunt. The CRF’s cable-operated clutch is also fitted with a judder spring in its hub to absorb shock loads through the driveline if the rear wheel should snag a rock or a tree root on the trail.

While its engine may have been borrowed from a sportbike, the frame that houses it is purpose-built for dual-sport riding. Made of steel, the chassis features a combination of twin oval-section main spars, a semi-double cradle bottom connected to a round steel, bolt-on subframe. Wheelbase is 56.9 inches, with the front-end geometry checking-in at 27.6° of rake and 4.4 inches of trail. Hitting our scales at 324 lbs.—or roughly 4 lbs. more than a race-ready V-twin Harley-Davidson XR750!

But that doesn’t mean that the CRF250L handles like a pig, because it really doesn’t, at least not when there’s nothing around to compare it to. Placing 152 lbs.—just under 47 percent of its weight—on the front wheel, the CRF isn’t lightning-quick in the steering department, but it is accurate enough at most speeds, and its wide handlebar gives the rider plenty of leverage to crank the bike into a turn. That helps the chassis to behave itself quite well on all but the roughest, high-speed trails where the CRF’s portly weight can make itself known.

When riding around town or down the highway to your favorite off-road fountainhead, you’ll appreciate just how comfortable the CRF’s seat and relaxed ergos really are. Its seat is extremely narrow near the tank, but it is noticeably rider as it tapers toward the middle and rear portions. The wider mid-section offers a very comfortable ride around town or on the highway.

Part of that feel may be due to the suspension. In keeping with its budget-conscious design, neither the CRF250L’s 43mm coil spring Showa inverted fork nor its Showa shock are likely to be mistaken for last year’s CRF motocross suspension. Both ends are preload adjustable, and the shock features a rebound adjuster as well. The shock is mated to a Honda Pro-Link rear suspension system with a monobloc tapered aluminum swingarm. Our veteran testers found that the 9.8 inches of travel up front is plush but too soft for aggressive off-road riding. Likewise, the 9.4 inches of travel out back also tends to be too cushy when the going gets really rough. Still, the CRF250L’s suspension delivers decent control of the bike’s heft at the speeds that most of its customers are likely to travel. 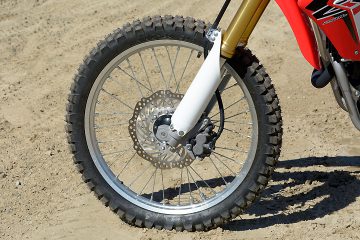 Honda doesn’t scrimp in the wheel department, however. Its 21-inch front and 18-inch rims are made of aluminum rather than polished steel, and its spoke pattern is the same as Honda’s CRF motocrossers because that particular lacing pattern is claimed to make the wheels more rigid. That’s a plus, but they’re shod with IRC Trails GP tires (3.00-21 front, 120/80-18 rear) that are definitely more competent on the street than in the dirt. The good news is that the rim sizes give the customer an option of some very good D.O.T.-approved off-road rubber, such as Dunlop’s D606s for example. More traction through better tires will definitely up the CRF250L’s fun factor, and that’s the first mod we would make.

Braking chores are handled via a single 256mm wave-style rotor and twin-piston caliper up front and a 220mm with single-piston caliper out back. The brakes offer plenty of power with a linear feel the dirt, which we like. Street riders may want more power on the street, but we’re confident that Honda erred on the right side of the equation. The design of the rotors is inspired by Honda’s motocross machinery and thus is intended to deliver a certain level of self-cleaning ability in wet and muddy terrain. Honda also offers an ABS-equipped CRF250L that costs $300 more than the standard CRF250L’s $4999 MSRP.

Being a street machine means that the Honda also features an instrument pod, and the CRF250L’s digital instrumentation offers the bare essentials, including speedometer, odometer, dual trip meters and a fuel gauge.

We really don’t have any major complaints with the Honda CRF250L. When ridden as it should be, it is a spritely and fun do-it-all dual sport machine. There are are machines, particuarly of European manufacture, that lean much closer toward the hard-core dirtbike side of dual sporting, but they aren’t as adept at street riding as the CRF250L, nor are they as inexpensive. The Honda fits nicely in the niche of “jack of all trades, master of none.”