Honda has made a couple minor suspension tweaks to put more of the 2016 Honda CRF450R’s power to the ground, and we like ’em!

When DirtBikes.com test pilot Ryan Abbatoye came in after his first laps aboard the 2016 Honda CRF450R at Southern California’s Pala Raceway, a Honda official were waiting for his first impression with one of those, ‘Well?” looks on his face.

“It feels faster than last year’s,” Abbatoye said. “Are you sure you didn’t make any changes to the motor?”

The Honda man broke into a cheshire cat grin. In fact, the new CRF450R uses the exact same motor specs as the 2015 model. So why does it feel faster?

If you read our First Ride impression of the 2016 Yamaha YZ450F then you know that Yamaha worked to refine the YZ’s chassis geometry and suspension in order to give it a more balanced feel. Honda has done the same, only Honda engineers focused solely on the CRF450R’s suspension. The 2016 CRF’s improved power feel comes courtesy of 5mm longer fork leg for its 48mm KYB PSF (Pneumatic Spring Fork), thus raising the front end, while simultaneously modifying its Pro-Link rear suspension linkage. The new linkage uses longer pull rods and a different delta link (the triangular-shaped fixture in the linkage) to make the linkage ratio stiffer initially, softer at full compression and more linear in the linkage ratio’s overall curve. Beyond that, the CRF’s chassis dimensions and weight are virtually identical to last year’s, with a 58.8-inch wheelbase, 27-degree rake and 4.6 inches of trail. The suspension changes make the suspension feel more hooked up without Honda having to resort to any changes to the CRF’s electric-smooth engine, and it’s an impressive difference.

It may sound gimmicky, but it’s effective, and the difference was readily apparent to our expert-level tester as he railed Pala’s berms and landed from its man-sized jumps with confidence practically from the get-go. The 2015 CRF450R was already excellent. The 2016 is even better.

“I definitely feel like the bike is more powerful than before, but the Honda guys say that it is due to the change in the suspension linkage and the fork,” Abbatoye said. “It just makes the chassis feel more ‘free,’ and it helps to get more of the engine’s power to the ground. It is really noticeable. I feel it coming out of the corners, for sure. In the past, the Honda has felt like it is down on power compared to some of the other manufacturers, but it feels a lot better now, maybe up to par with them.”

The revised suspension affects the CRF450R’s overall handling for the better by also eliminating the big Honda’s tail-high “stinkbug” feel, which made its steering just a touch nervous when entering a corner under hard braking. Also gone is the tendency to oversteer or “corkscrew” when planted hard in a tight turn. The 2016 CRF450R is more stable and more precise all the way through a corner, whether fast or slow, tight or wide—and all this without sacrificing wheel travel at either end; the 2016 features the same 12.2 inches of suspension travel up front and 12.4 inches out back as the 2015.

Both the front and rear KYB suspension units now offer twice as many clicks per circuit–eight instead of four–allowing for finer suspension adjustments.[/caption]The suspension’s improved performance may also be partially due to another change that Honda incorporated into the CRF450R for 2016, as its 48mm PSF fork and KYB piggyback reservoir shock now feature twice the adjustment range of their respective 2015 units–8 clicks each, instead of 4—in order to make it easier for a rider to fine-tune the fork and shock action. The difference in each click is still noticeable, but the CRF’s suspension isn’t as sensitive as it was before. Other than its longer legs, the KYB PSF fork’s specs are identical to the 2015 model’s, and it handles smaller spike hits and large G-outs with excellent control.

Rewind to last year: The KYB PSF design compartmentalizes the compression damping circuit in the left leg, and the rebound damping circuit is in the right leg, with the valve specs being the same on both sides. During compression, the displaced oil travels through a bleed port at the bottom of the fork through the space between the inner and outer fork tubes to make the ride more supple. Both sides feature high- and low-speed adjusters to simplify the process of dialing-in the desired fork performance. Out back, the KYB shock still features the same adjuster configuration as last year, placing the rebound damping adjuster with the shock’s high- and low-speed compression adjusters just above the oil reservoir for easy adjustment. Honda officials tell us there is slight difference in the shock-valving, particularly mid-stroke, to offset the linkage change.

Lastly—and this is kind of a strange one to us—Honda claims that changing the CRF450R’s chain roller diameter from 38mm to 34mm actually improves the rear suspension performance by addressing a condition that its factory racers and test riders noticed last season. The smaller chain roller reduces the amount of load on the chain under braking and thus does not influence shock performance during rebound, which equates to better rear-wheel traction.

“It’s more level now, pretty solid in the corners and tends not to oversteer like it used to,” Abbatoye said, “but we needed to make some adjustments to make me happy. We had to go slower on the rebound damping in the shock because in the fast stuff it would blow through the travel and then spring out (extend) and kick side to side. We slowed it down a little bit and also went stiffer on the compression. It was the same with the fork. We made some minor adjustments to make it stiffer. The changes really helped it smooth out, and it felt great.”

The 2016 CRF450R’s 449cc, liquid-cooled, Unicam (SOHC), four-valve, four-stroke Single retains the same 96.0mm x 62.1mm bore and stroke, and the same 12.5:1 compression ratio as the 2015. Its right-side exit exhaust port configuration and combustion chamber shape are the same, and uses the same size titanium intake and steel exhaust valves. Also, its exhaust header still curves inside the front downtube—a change that was made in 2015 along with the new exhaust port layout—and exits spent gases through twin mufflers.

There’s no question that the CRF450R favors user-friendly, rather than brutish, open-class power. It still bristles with smooth yet snappy low-end torque before rolling into a seamless mid-range and finishing with a clean top-end that tapers off as engine rpm suprasses the 9000 rev mark. It isn’t an arm jerker, but throttle response through its 46mm throttle body is still excellent, thanks to ignition timing and fuel setting changes to the Honda’s Dual-Timing PGM-FI engine management system in 2015 Frankly, we’d love to race one in an off-road event, and Honda’s Engine Mode Select function is one of the reasons why.

Incorporated in 2015, the CRF’s Engine Mode Select button allows the rider to select among three EFI/ignitions maps stored in the CRF450R’s ECU simply by pressing a button mounted on the right side of the handlebar. The first is the stock map, but the other two slots or available for customized maps that can be reprogrammed via an HRC accessory tuning tool. As delivered, Mode 2 is for slippery off-road surfaces, while Mode 3 is more aggressive for high-traction surfaces. The system could be extremely useful in the varied terrain and conditions that are usually found in a typical off-road race.

That said, while we thought we might see some sort of holeshot-assist technology incorporated into the Engine Mode Select system for 2016, Honda elected not to add one. It seems to us that this would have been a fairly simple way to increase the CRF450R’s customer value, but what do we know.

We still love the buttery-smooth shift action of the Honda’s five-speed transmission and its silky clutch performance, although the CRF’s stock gearing was a tad short for some of our test track’s longer straightaways. Even so, Abbatoye was convinced that taking a tooth off the rear sprocket wouldn’t hamstring the Honda’s brawn at the expense of being able to hold a lower gear just a little longer.

And, regardless of how fast you go, the CRF’s braking performance is still awesome. It’s wave-style 260mm front and 240mm rear rotors are clamped by Nissin calipers that offered excellent feel and consistent stopping power in Pala’s deep, tacky clay, which later became dry and slick on some parts of the track. The CRF450R also still comes from the factory with Dunlop’s excellent GEOMAX MX52 intermediate/hard-terrain tires front and rear, and we love them for their grip and consistency regardless of how hard the bike is leaned over in a corner.

The CRF450R still boasts comfortable ergonomics, too, with a slender seat and a roomy cockpit layout—for the most part. We do have a complaint, though: The Honda’s radiator shroud design is still a knee guard and boot snatcher when cornering. We’ve raised this issue before, and we know that Honda’s factory race teams trim and/or zip-tie the stock shrouds to alleviate the problem. We still say Honda should revise the design to eliminate this annoyance.

But even so, we think that Big Red will have a big hit on its hands again this season with the CRF450R. The 2016 model is indeed better than the 2015, and it can be had for the same $8699 price, which already makes it a better value. New copies of Honda’s tried and true 450cc moto-masher are already making their way to dealer showrooms as we speak. 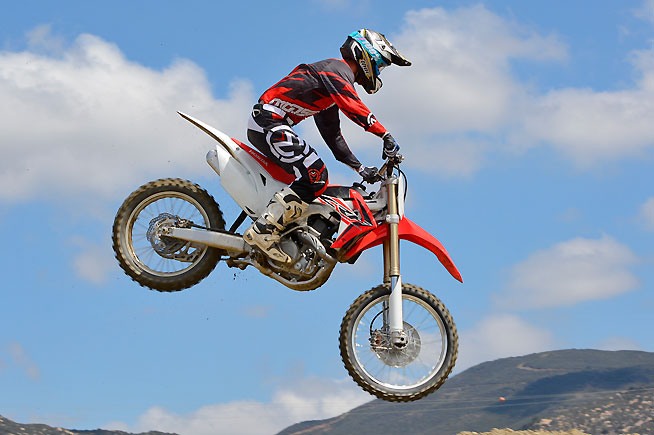 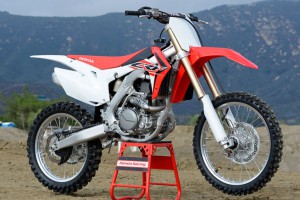 *Includes all standard equipment, required fluids and full tank of fuel—ready to ride.