The James Stewart Freestone Spring Championship is intended to represent the best in Texas amateur motocross. 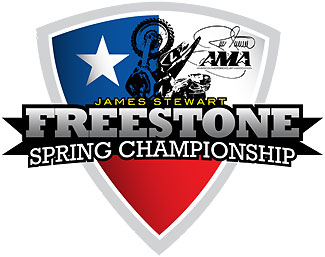 The product of a collaboration between former AMA National Motocross and Supercross champion James Stewart and Freestone Raceway, the Freestone Spring Championship will host 44 classes, including new 50cc classes, the all-new 125 (12-16) and AllStar Amateur classes. The event will also feature the AMA Womens Motocross Cup (WMC) and Round 2 of the WMX Series. The WMC runs the same program as the JS7 event with practice on Tuesday and racing beginning on Wednesday. Round 2 of the WMX Series is all conducted with timed practice and racing on Saturday.

Stewart said that he is happy to have his name on the event.

“I always enjoyed going to Texas each year when I was an amateur and while those tracks are gone, I raced Freestone as a pro” Stewart said. “The first time I went there, Freestone was part of my undefeated season in 2008. When I came back in 2012, I had one of the greatest battles of my career there. Even my first pro Supercross win in the premier class came in Dallas. Texas holds a special place in my heart, and having my name on an event that has grown every year since it began means more to me than I can explain. To offer all the class champions a ride day at my house in November is something I was never offered when I was a kid, so to see their faces when they come in the gates shows me how important it is.”

“It’s important for us to have partners like Rocky Mountain ATV/MC,” said Tom Shields, Event Director. “Any company can spend money to get their name out there with branding, but when Rocky Mountain wants to participate and interact with each and every rider, you know you have a partner and not just a sponsor.”