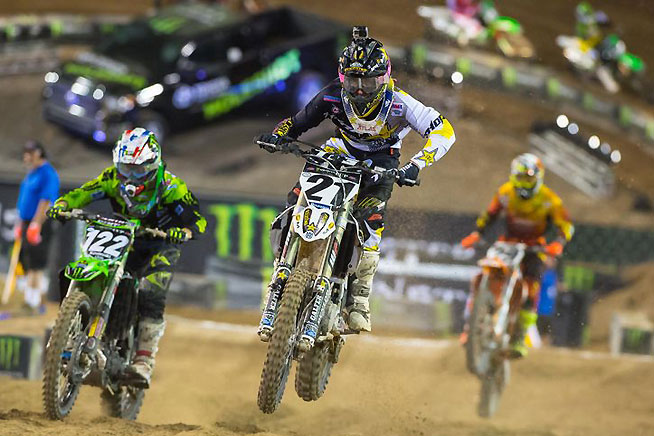 ELLENTON, Fla. (October 11, 2016)–Feld Entertainment announced today that this Saturday’s Monster Energy Cup, from Las Vegas’ Sam Boyd Stadium, will be nationally broadcast on FS2 and the FOX Sports GO App for the initial airing, in addition to a repeat airing on FS1 and a 90-minute feature on the Fox Broadcast Channel.

The Monster Energy Cup live television broadcast on FS2 will be available throughout the United States and Canada, while Australian fans will once again be able to catch all of the racing action on their local ESPN channels.

For the first time ever, international fans outside of North America and Australia can also watch all of the exciting racing live via the Monster Energy Cup pay-per-view livestream that will be available through the SupercrossLIVE website. Fans can sign up now to get their virtual ticket to watch live on Saturday, October 15, plus continued on demand availability through the end of October. The livestream costs $14.99 and is compatible with mobile devices and can also be casted to Smart TVs. Sign up now at – http://www.supercrosslive.com/live-race

The 2016 Monster Energy Cup track features the highest start in Supercross history, an all-new track design inspired by 5-time Monster Energy Supercross Champion Ricky Carmichael. The massive downward start allows for top speed as the field has 470 feet of smooth track surface leading into the first turn. Additional features include high-banked, challenging corners, Monster Alley – a fast straightaway that stretches outside the stadium where pro racers reach upwards of 70 miles per hour, plus opportunistic sand rollers, and plenty of sections to thrill the fans with big air.

The Monster Energy Cup posts a $250,000 purse with the winner walking away with a $100,000 check, and any rider that wins all three, 10-Lap Main Events will take home $1 million, the largest prize in motorcycle racing. This feat has only occurred once in the history of the Monster Energy Cup when Ryan Villopoto grabbed the honor in 2011.

Tickets for the 2016 Monster Energy Cup can be purchased at the Thomas & Mack Center Box Office, UNLVticket outlets, online at www.UNLVtickets.com, www.MonsterEnergyCup.com, or by phone at (702) 739-FANS. Tickets will be available at the Sam Boyd Stadium Box Office on the day of the event only. Practice and qualifying begins at 12:00 p.m. and the Main Event begins at 6:00 p.m. PT.

About the American Motorcyclist Association:
Founded in 1924, the AMA is a not-for-profit member-based association whose mission is to promote the motorcycle lifestyle and protect the future of motorcycling. As the world’s largest motorcycling rights and event sanctioning organization, the AMA advocates for riders’ interests at all levels of government and sanctions thousands of competition and recreational events every year. The AMA also provides money-saving discounts on products and services for its members. Through the AMA Motorcycle Hall of Fame in Pickerington, Ohio, the AMA honors the heroes and heritage of motorcycling. For more information, visit www.americanmotorcyclist.com. Not a member? Join the AMA today: www.americanmotorcyclist.com/membership/join.