As exciting as the first two rounds of the 2017 Monster Energy AMA Supercross Series were, it wasn’t until round three at Angel Stadium that the unexpected twists and turns that make the series so dramatic reared their ugly head.

Before 42,984 fans Saturday night, reigning Monster Energy AMA Supercross Champion Ryan Dungey scored his first win of the season, but he did so after taking an unusual route to the main event. Meanwhile, Team Honda HRC’s Ken Roczen sailed through his heat race, only to crash hard in the main event and suffer an apparent broken arm that not only halted his two-race win streak but will also likely end his hopes for his first career 450cc supercross title.

The night turned strange almost immediately. While Roczen stormed to the win in the first 450cc heat race, reigning Monster Energy AMA 250SX East Champion Malcolm Stewart moved into second place in his 2017 debut aboard his Ride365.com/Stewart Racing Suzuki, and he would hold the position throughout the five-minute-plus-one-lap heat to earn a direct transfer to the main event. Meanwhile, Rockstar Energy Husqvarna’s Jason Anderson tangled with Smartop Motoconcepts Honda’s Vince Friese while coming through the pack and crashed, collecting Red Bull KTM’s Marvin Musquin as well. After the race, an angry Anderson took a swing at Friese as the two were exiting the stadium through the tunnel. The net result was that FIM officials disqualified Anderson from competition for the rest of the night.

Dungey’s unusual route to the main event began as he got tangled up in first-turn traffic in the second heat race, hitting the ground and suffering a broken throttle that forced him to drop out of the race. KTMs still ran one-two in the heat, only instead of factory Red Bull KTMs, it was Rocky Mountain ATV-MC/KTM/WPS’ Davi Millsaps who collected the win, followed by teammate Blake Baggett.

Both Dungey and teammate Marvin Musquin had to earn their spots in the main event through the first semi. Musquin took the win with Dungey third behing RCH/Yoshimura Suzuki’s Broc Tickle.

When the gate dropped for the 450cc main event, Monster Energy/Yamalube/Chaparral/Yamaha Financial’s Cooper Webb bagged the holeshot, but Dungey had gotten off to a rocket start, and he snatched the lead away from the rookie Yamaha rider and never looked back, leading every lap of the main event en route to his first 450cc main event win of the season and the 32nd of his career. Dungey’s margin of victory was 2.7 seconds. The win, combined with Roczen’s DNF, also gave Dungey the series points lead. He now has 69 points, seven more than teammate Musquin.

“I’m thankful to get this win earlier in the season rather than later,” Dungey said afterward. “Tonight was testing for me–first the throttle broke in the heat race and then my start in the semi wasn’t too great, but we were able to end the night on a good note. The main event was tricky. The track was nasty, but I’m surprised with the rain that it was as good as it was. There were a bunch of kickers so I was just focused on hitting my lines and marks. Overall, with all the adversity we faced I’m glad we could come away with the win tonight–it was a hard-earned one!”

Roczen’s race ended horrifically on lap 10. After getting off to a bad start, the German rider quickly worked his way through traffic to run third, but a miscue in a rhythm section sent him up and over his factory Honda, and he smacked into the race of a jump with a forceful impact. Roczen had to be attended to by medical personnel, and he is reported to have suffered a broken forearm in the crash. The DNF dropped Roczen into a tie for third in the series points standings, although Roczen will undoubtedly fall farther behind as he misses a yet-undetermined number of rounds.

While Dungey ran away with the race, Musquin got off to a fifth-place start behind Webb, Team Honda HRC’s Cole Seely and Monster Energy Kawasaki’s Josh Grant, but the fast Frenchman worked his way into second place after passing Seely on lap 11 to give Red Bull KTM a sweep of the top two positions on the podium.

“All I can say is ‘you gotta do what you gotta do,’” Musquin said. “Both of us [Dungey and Musquin] went to the semi-final but still qualified to the main event and proved we can still be on the podium after going to the semi. Once again at the beginning I wasn’t as good as the end, but I tried to stay calm and keep up with those guys. Roczen got around me and had a big crash, so after that I tried to switch up my line to stay smooth. I wasn’t too far from Ryan [Dungey], but he was already gone at the beginning, so second place wasn’t too bad for me and a really good night for Red Bull KTM.”

Seely hung tough for third place, giving him his best main event finish of the 2017 season, and it appears as if he will now be the torch bearer for Team Honda HRC for the rest of the season. Seely is currently tied for third place with the injured Roczen, 18 points out of the series lead.

“I’m happy to be up on the podium,” Seely said. “It’s always good to walk away with a podium, but I’m kind of bummed with myself for making a little bobble there and stalling it—it was my first time getting to test out the electric start there. It was still a good night. I was trying to reel-in Dungey there, but he was laying out some fast laps.”

Webb made a huge stride by running in the front portion of the field for the entire race, netting a career-best fourth-place finish ahead of Autotrader/JGR/Suzuki’s Weston Peick, the latter continuing to post consistent main event finishes as he currently runs sixth in the series points standings. Monster Energy Kawasaki’s Grant finished sixth ahead of Monster Energy/Yamalube/Chaparral/Yamaha Financial’s Chad Reed, while Grant’s teammate Eli Tomac struggled again and missed the podium, finishing eighth. Rocky Mountain ATV-MC/KTM/WPS teammates Milllsaps and Baggett completed the top 10.

The 2017 Monster Energy AMA Supercross Series now moves out of California and heads to University of Phoenix Stadium in Glendale, Arizona, for round four on January 28. 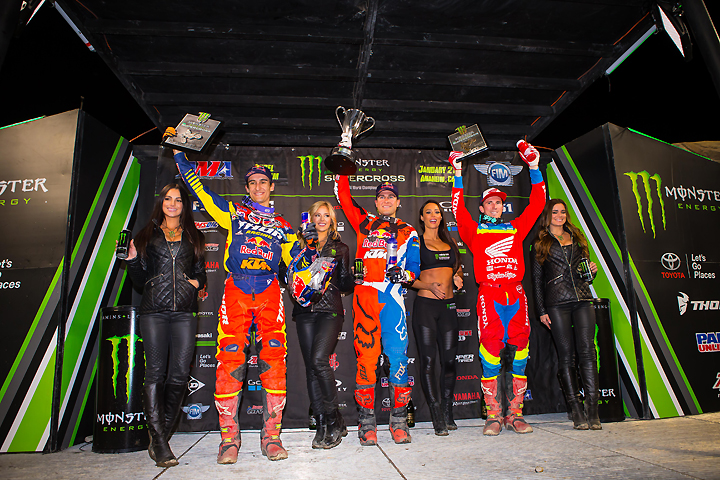