With each season, the Monster Energy AMA Supercross Series opener at Angel Stadium in Anaheim, California, offers the sport’s elite athletes the opportunity for a fresh start, but Ken Roczen showed that he clearly prefers keeping things as they were last year.

That’s when the German rolled to victory in the last five consecutive rounds of the 2016 Monster Energy AMA Supercross Series. And although 2017 finds Roczen with a new team, trading his Suzuki for a Team Honda HRC CRF450R, he was only too happy to pick up right where left off by scoring his 10th career 450cc supercross win and his sixth 450cc supercross win in a row as well as his third Anaheim I win in the past four seasons. Actually, Roczen not only won tonight’s main event, he flat dominated it.

“Like I said in all the interviews before [tonight], I’m just bringing that much more focus, and I’m super fit, so I have a lot of fun out here,” Roczen said.

As Roczen quickly pulled clear of the field, Musquin and Tomac engaged in a battle for the runner-up spot. After a brief battle, Tomac put Musquin away just before the finish line jump. Dungey quickly drew up on Musquin’s rear wheel to battle for third. Passing his Red Bull KTM teammate would be another matter for Dungey, but the champ got the job done on lap five.

The race for the top three settled down after that, but there was still some solid racing going on through the rest of the field as Team Honda HRC’s Cole Seely moved into fifth place, just ahead of Rockstar Energy Husqvarna’s Jason Anderson and Millsaps. Seely and Anderson pulled away from Millsaps, with Seely maintaining a couple bike lengths on Anderson, who won the Anaheim season opener in 2016. Anderson made an aggressive outside pass on Seely to take over fifth place on lap nine.

Despite questions about how he would respond to having to come back from the neck injury suffered during the 2016 outdoor season, Dungey showed that he still has the speed and fluidity as he easily shot by Tomac for second place on lap nine. Musquin, too, passed Tomac for third place on two laps later.

But there was just no catching Roczen, who moved out to an 11+-second lead for most of the race and only added to it in the late going. Roczen crossed the finish line with 16.2 seconds in hand over Dungey. Musquin finished a strong third ahead of Anderson while Tomac was just able to hold off a charging Seely for fifth place.

“The track got rough,” Roczen said. “They built the track a lot more tamed down, and that helped out a lot because obviously it got super rough, so that definitely made it more difficult. You know, we’ve got to keep our head on our shoulders—bottom line. I’m celebrating tonight with my new family, HRC Honda team. It was a great first round, but like I said, we’ve got to keep our head on our shoulders and put the same focus and the same effort into every single race.”

Despite not being able to challenge Roczen, Dungey was still happy to earn his 89th career podium finish. Second was good enough in his first major points-paying race since breaking his neck during the 2016 Lucas Oil Pro Motocross Championship.

“I don’t want to take from Ken [Roczen]—he rode great tonight, but after outdoors—Monster Cup and all that stuff was good, but this is really getting my feet back into the game after some time off, so I’m happy. We had a good, solid run tonight. We didn’t get off to the greatest of starts, but we made some passes happen, you know, and we were second on the night. I can’t complain. I was waiting to get to this race. All of the testing we do in the off-season, we can do it all, but this is the true challenge. I’m really glad. We learned some stuff, and we moved forward. I’m really happy with the night. I’m really not bummed. It was a good distance from first to second, but that’s the challenge, so we’ll work on closing that.”

Musquin’s third-place finish marked his sixth career 450cc supercross podium finish, and it showed that the Frenchman may be a force to be reckoned with yet again in 2017.

“I’m more prepared than last year,” Musquin said. “Last year was my rookie year, and I didn’t have much time on the bike. This year, yeah, so much better. I’m really happy with the way the off-season went, winning some races, but that was not the championship. Here, tonight, I would have been happy to be on the podium, so I’m happy third. It was a good moto. I was able to pass Eli [Tomac] after a couple laps, after he passed me at the beginning. Everybody was going pretty fast. I started off a little bit slow, but at least I got a good start and I was fighting with those guys, and that’s what I want to do all year long—to battle with Roczen, with Dungey, with Tomac, and make the fans proud and the team proud, my wife and [mechanic] Frankie proud.”

It was a rough night for two of the series veterans, including Red Bull KTM’s Trey Canard, who suffered an injured shoulder during the day’s practice. Although Canard qualified for the main event via the 450cc LCQ, he elected not to start the big race of the night. Two-time AMA Supercross Champion Chad Reed had an excellent heat race but an awful main event, the Monster Energy/Yamalube/Chaparral/Yamaha Financial rider finishing a disappointing 21st out of 22 riders. 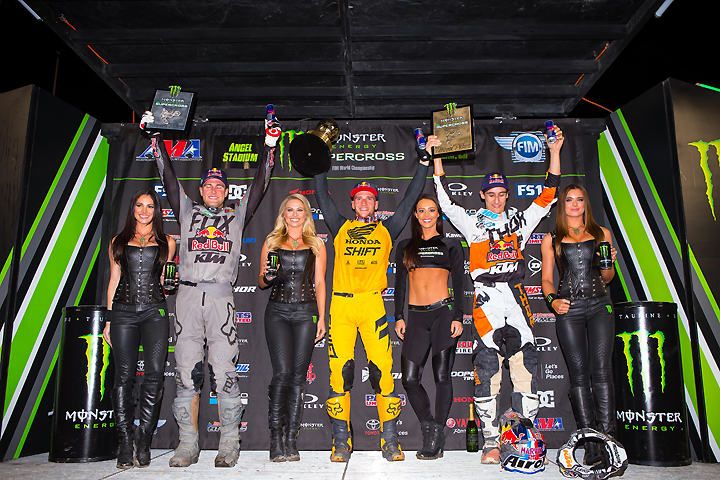