Honda’s economical CRF250L doesn’t pack a lot of punch, but that sure hasn’t stopped it from putting a whoopin’ on the competition in the dual-sport market.

The CRF250L may not qualify for hard-core dual-sport status, and yet it leads the category with 20 percent of the market share. Around 4000 customers ponied up for a CRF250L in 2016—we’d like to think it’s because of our 2016 Honda CRF250L Ride Review. Whatever the case, people are buying CRF250Ls and loving ‘em, and we can’t fault them for that. Even though the CRF250L isn’t the quickest or fastest quarter-liter machine in the class by a longshot, that’s fine. It was never designed to be a massive off-roader as much as an off-roader for the masses.

Now, you might think that idea harshes your cool, but believe us when we say that you want the OEMs to produce machines like these, because if they are successful, and more people decide to move on to a full-fledged dirt machine, the manufacturers will produce more and better dirtbike models. That’s how it works.

The CRF250L already has a reputation as a “go anyplace within reason” dual-sport machine. Heck, we even had our 2016 test unit on a motocross track and had fun doing it! All we’ve ever really begged for is just a little more power. Well, for 2017 Honda has not only updated the standard CRF250L to give it a little more zest, it has also added a second, eye-catching model. In addition to the standard CRF250L, the all-new 2017 CRF250L Rally boasts Dakar Rally styling lifted straight from Honda’s CRF450 RALLY machine, slightly taller suspension and more fuel capacity than the CRF250L so you can have even more fun between filling stations. For 2017, the CRF250L costs $5149 while the CRF250L Rally costs $5899.

Honda recently invited us to sample both machines in Southern California, using the California headquarters of Johnny Campbell Racing as its headquarters. If you don’t know who Johnny Campbell is, then you must not know off-road racing, because the San Clemente-born Campbell is a legend in the discipline with a plethora of SCORE Baja 500 and 1000 wins as well as two finishes in the Dakar Rally. Now retired from racing, Campbell fields Honda factory-backed teams in the AMSOIL Grand National Cross Country Series, where team rider Trevor Bollinger is the reigning champion in the XC2 Pro class. 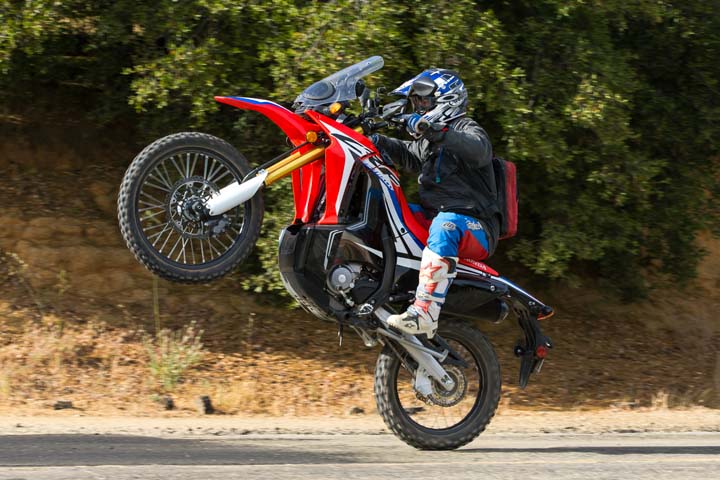 Our band of journalists got the chance to sample the CRF250L and CRF250L Rally equally while embarking on a self-guided tour using the Rever navigational app on a route that mixed a good portion of off-road riding in with two-lane blacktop as we rode to and from the Robert Renzoni Winery for lunch before swapping models and heading back to JCR in the afternoon.

While the CRF250L Rally is technically an all-new model, it shares the updates made to the CRF250L, which include a 2mm larger throttle body (now 38mm rather than 36mm) and a revised airbox with a 100mm longer connecting tube for improved throttle response. The airboot has also been reshaped to give the CRF250L a better “pulse feeling” when riding. Its two-chamber structure is also more compact and thus a little lighter than the previous component. In search of a little more peak horsepower while reducing emissions, Honda also fitted a new ECU and increased the exhaust headpipe size by 10mm, to 38mm.

Chassis-wise the CRF250L receives a few more upgrades for 2017, including updated instrumentation that features a bar-graph tachometer to keep track of revs, LED bulbs in the taillight for improved reliability and brighter lighting, an updated license-plate holder and a new wave-style 256mm front rotor (the CRF250L Rally’s is bigger still, 296mm). Even better, both 2017 CRF250Ls are available with optional two-channel ABS that can be deactivated for dirt riding.

Where the CRF250L boasts new CRF motocross-style graphics, the CRF250L Rally offers an entirely different look. In addition to the engine upgrades the Rally model’s Showa fork travel is stretched 1.18 inches while its Showa shock rides on a different linkage than the CRF250L. Its Dakar-influenced styling also incorporates a 2.7-gallon fuel cell, .6 of a gallon more than the CRF250L.

Our day began with the CRF250L Rally, and it included some rather technical fire road terrain with plenty of rocks and huge washouts, courtesy of last winter’s torrential rains. It made for an excellent test of the Rally’s capability.

Despite the upgrades, the CRF250L and CRF250L Rally’s shared, CBR250R-based 249.6cc four-stroke Single is still no power monger, and yet it’s still a blast to ride. Its 76mm bore and 55mm stroke, DOHC four-valve favors rpm over torque, and there’s plenty of breath to keep the Rally rolling down the road or along the trail. The 250L motor is truly electric in feel despite its lack of grunt, and its smooth-shifting six-speed gearbox and linear-feeling cable-operated clutch facilitate the multiple gear changes needed to keep the engine in the “meat” of its powerband. The CRF250L’s ratios are identical to the CBR’s, but the CRF transmission boasts wider gears and strengthened shift dogs. The clutch is also fitted with a judder spring in its hub to absorb shock loads through the driveline if the rear wheel should snag a rock or a tree root on the trail.

The engine’s smooth and precise fuel-injection is a real plus, delivering clean, quick throttle response, though you still need to rev it up and snap the clutch in order to pop over rocks, ruts and other obstacles on the trail. When the going gets slick, the L motor has just enough flywheel inertia to maintain sure-footed traction through most of the off-road terrain you’re likely to attempt on the Rally. The real beauty of the Honda motor is that it instills confidence that allows the rider to grow his or her off-road capabilities without getting into trouble. Previous CRF250L testing has shown us that the engine’s fuel economy is around 73 mpg, so the CRF250L and the Rally should be as user-friendly at the gas pump as it is on- or off-road.

Both machines deliver reasonably precise steering thanks to wide handlebars that afford the rider plenty of leverage when transitioning from left to right and back again. The chassis on both machines delivers a stable feel, allowing you to push either machine harder than you’d think you could. Experienced off-roaders might be wanting more performance in a few key areas, but not so much that the CRF250L or the Rally are a big letdown to ride in stock trim.

If there’s one area where the CRF250L Rally does come up a little short—and that’s ironic—it’s in the suspension department. Despite its 1.18-inch longer, 11.3-inch travel, 43mm coil spring Showa inverted fork up front, the added weight of the Rally’s bodywork and heavier fuel load tend to make the front suspension action feel mushy when reasonable hits are encountered. While the shock is mounted to a Honda Pro-Link rear suspension system with a monobloc tapered aluminum swingarm to yield 10.6 inches of rear suspension travel, both ends are on the cushy side once the pace goes beyond casual trail riding speeds.

That isn’t the case on the lighter CRF250L, which features essentially the same fork and shock but with 9.8 inches and 9.4 inches of travel respectively. The standard model doesn’t reach its off-road speed limit quite as quickly as the Rally will. We found out during our return leg to Johnny Campbell Racing that it is surprising just how silly you can get on the CRF250L before common sense prevails and keeps you from going on your head. The sensation is that the CRF250L’s suspenders simply have more spring tension, which delivers a tauter and more controlled feel that helps when you find yourself going a little too quickly in the rough stuff, and the CRF250L’s smaller and slimmer overall feel encourages such shenanigans in the first place.

But if you should find yourself needing to get on the binders, at least Honda didn’t scrimp on their performance. The 296mm wave-style front rotor on the CRF250L Rally and the 256mm wave-style rotor on the standard CRF250L, which are both clamped by Nissin twin-piston calipers, deliver a smooth and controllable feel when applied. The action is more akin to dirtbike brakes than streebike brakes, which is to say more linear than downright powerful, but the front brake on either machine works well with the 220mm rear disc and single-piston caliper out back to provide plenty of stopping power, and with the optional ABS there’s even less reason to worry about locking up either wheel during a panic stop. Adding the ABS option will set the customer back an additional $300 more than the base MSRP on either machine.

But whether you do or don’t opt for ABS, plan on spending a lot of time enjoying either of these machines. If you’re more of a long-distance guy or gal, then the CRF250L’s larger fuel tank, slightly larger feel and excellent wind protection should be to your liking. If you’re going to spend more time experiencing tight single-track trails, the CRF250L is probably a better bet. The Rally’s larger feel and windscreen enhance its all-day comfort, and it would be our first choice for a long road or trail ride. The standard CRF250L offers smaller, more dirtbike-like ergonomics for riders who really want to test their mettle on technical trails. Neither machine feels cramped or otherwise uncomfortable in the cockpit.

Either way, know that both machines boast the same top speed—about 81 mph—which is plenty for highway use. However, riding them that fast for any length of time isn’t all that pleasant. Despite their smooth-revving performance and vibration-quelling, gear-driven counterbalancers, our experience on the super slabs was that 6000 rpm was about the limit before secondary vibration began to creep through the bars, pegs and seat, making the ride less pleasant. Unfortunately, the bar graph tachometers on both showed that indicated 65 mph comes at a buzzy 6800 rpm. Keeping the revs to 6000 produces an indicated 58 mph, not really enough for Southern California freeway use but more than enough for two-lane, backroad exploration. 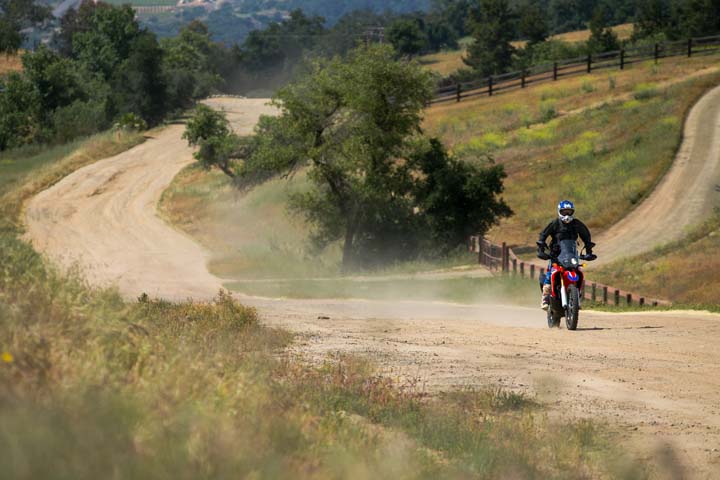 Even so, aside from the few shortcomings that are obvious concessions to their economy bike status, the 2017 Honda CRF250L and CRF250L Rally are very capable machines for the entry-level or casual dual-sport rider. Both deliver just enough engine performance, comfort, handling and braking to justify their existence, something to which the CRF250L’s sales figures already bear witness. More experienced riders might wish for more power or better suspension performance in the dirt, but that wouldn’t stop us from sticking either one of these little Hondas in our garage. 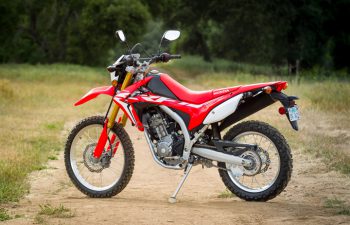 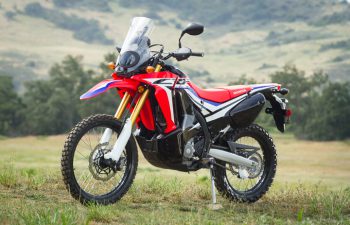