If we told you in our 2017 Honda CRF250X review that this little Honda is the one bike that we’ve had the most fun riding this year, you might start laughing. Well, go ahead. Laugh your ass off, ‘cause it’s true.

And if you’re wondering just what is it that Honda did to improve the 2017 CRF250X over last year’s bike, what changes make it so much more of a joy to ride than previous versions, the answer is… nothing. Hell, Honda didn’t even bother to change the graphics from last year’s model.

Why then is the CRF250X so worthy of our respect? Because it knows what it is. And what it isn’t. If you’re seriously into racing, then there are several other models already out there that will do a better job for you, but if you want a quick, well-suspended, reliable and fun machine that is EPA-certified so you can trail ride on any public land until the wheels fall off, the CRF250X is such a machine. And if you’re an off-road newb who wants to have a go at your local club hare scrambles, GPs or enduros, it is plenty capable. The CRF250X may be one of the best bargains in off-road motorcycling today.

Just know going in that your $7410 isn’t going to buy you the latest and greatest 250cc off-road single that Honda can produce. In fact, we expect that you’ll  have to pony up a bit more for that if and when Honda releases an all-new CRF250RX based on an all-new Honda CRF250R motocrosser—if the all-new 2017 Honda CRF450R and 2017 Honda CRF450RX have truly set the table, we expect to see one as early as 2018. No, the current CRF250X’s electric start, Unicam, single-cylinder four-stroke engine is based on an older, carbureted version of the CRF250R. Honda has always pushed the SOHC design on its liquid-cooled CRF models, touting the compact four-valve cylinder head design for its weight savings compared to a  comparable dual-overhead-camshaft motor while also allowing a more efficient combustion process due to its narrow valve angles. The Unicam design also allows the camshaft to sit sits lower in the head.

The CRF250X’s displaces its 249cc via a 78mm x 52.2mm bore and stroke, and its fueling is handled by a Keihin 37mm flat-slide carburetor with a Throttle Position Sensor (TPS) that helps to give it more of a fuel-injected throttle response. Even with a compression ratio of 12.9:1 the CRF runs smoothly on 91-octane pump gasoline. Its off road-specific, wide-ratio, five-speed transmission is managed via a cable-operated clutch.

Being carbureted means that the CRF250X can be a little cold-blooded on startup, but its choke lever is easily accessible and the convenience of electric start means you won’t spend any time using the kickstarter, which is there as a backup but is really just ornamentation on the X. A simple press of the button is all it takes to bring the Honda burbling to life, and it will be ready to ride if you fire it up before donning your chest protector, helmet, gloves and goggles.

We spent a day hammering the CRF250X on our favorite local trails and also turned it over to DirtBikes.com test rider Nic Garvin for a weekend at Ocotillo Wells near San Diego. In both instances, we came away with the same impression. The CRF250X is riot-level fun. Its power may not be as snappy as a fire-breathing motocrosser or closed-course off-road racer, but it’s spritely enough for experienced riders to keep up the pace. Its smooth low-end torque is hardly what we would call plentiful, but it allows the 250 to handily explore technical terrain and twisty single-track well enough, and it never seems to run out of usable power. Only the most hardened desert racers would suggest that the CRF could use more top-end, and even then what is on top remains smooth and vibration-free, thanks to its crank-driven counterbalancer.

And even if you have to row through the CRF250X’s five-speed transmission, you’ll be delighted by the Honda’s trademark smooth shifting action. On the down side, however, the CRF’s clutch, while smooth and linear, could be beefier to withstand a little slippage. We found ourselves having to crank in the Honda’s handlebar-mounted adjuster to take slack out of the cable as the clutch heated up in tight and technical terrain.

Like the motor, the CRF250X’s aluminum perimeter chassis is an older-generation design, and yet it seems to work seamlessly with the rest of the package to deliver a comfortable ride even at elevated trail speeds. Riding on a wheelbase of 58.3 inches, which is .4 inches shorter than the current CRF250R, the CRF250X is plenty stable in its own speed range. On the trail we did notice, however, that its steering is precise but not light. Checking its numbers, the X model’s 27.54-degree rake and 4.7-inch trail are in the same zip code as the CRF250R—the X’s rake has a little more slack, but we don’t think that has as much to do with it as the CRF250X’s weight.

Weighing in at 253.4 lbs. with its 1.9-gallon fuel tank topped off, the CRF places 119.7 lbs. on the front wheel and 133.7 lbs. on the rear wheel for a 47%/53% weight bias. With its 37.7-inch seat height and 13.6-inch ground clearance, the CRF250X is almost an inch taller than the CRF250R, and that’s bound to raise the X’s center of gravity. With more weight placed higher in the chassis, the CRF250X is bound to lack the snappy turning manners of its sister, and it’s noticeable even though the CRF250X lacks the Honda Progressive Steering Damper (HPSD) found on its big sister, the Honda CRF450X. For all its benefits, the HPSD has been known to slow the steering on Hondas we’ve tested that feature it.

Being old-school means that the CRF250X doesn’t sport the latest high-tech suspension components, which is not necessarily a bad thing if you hate air forks as much as we do. The CRF250X uses the same inverted 47mm Showa cartridge fork as the CRF450X It offers 16-position rebound and 16-position compression-damping adjustability, plenty to dial in its 12.4 inches of front wheel travel. The CRF250X’s 12.4 inches of rear wheel travel comes courtesy of its Pro-Link rising rate linkage that’s hooked to a Showa single shock. The shock features adjustable spring preload, 17-position rebound-damping adjustability, and compression-damping adjustments separated into low-speed (13 positions) and high-speed (3.5 turns).

We had no real gripes about the rear end, but we took some extra time to dial-in the fork to alleviate its tendency to deflect of rocks and roots in technical sections on the trail. It was unnerving at first, but backing off two clicks on the compression helped to allow the CRF fork to get into its stroke easier and tame the spike hits while not going all mushy over big jumps. We also took the time to drop the air pressure in the CRF’s Dunlop D742FA front tire to gain a little more compliance, although dropping from an off-road-recommended 15 psi to 12 psi requires that you take care not to pound a rock and pinch a tube. Out back, the CRF250X’s 18-inch rim is shod with a 100/100-18 Dunlop D756 tire that delivers plenty of squat and reliable traction in a variety of conditions.

While we’re not huge fans of Honda’s brakes overall, the CRF250X’s front and rear binders are more than capable of delivering the stopping power needed to haul its 250+ lbs. down from speed. Grabbed by Nissin calipers, the 240mm front and 240mm rear discs have plenty of power, and braking action is smooth and linear at both ends, something that is critical when that rutted, rocky downhill you just dropped into starts to look more like a trials section than a trail.

If the CRF250X is uncomfortable, we were having too much fun to notice, but the reality is that its cockpit is as refined as the rest of the machine. Its seat is slim yet comfortable, its perimeter chassis doesn’t feel bulky and the shrouds covering its dual radiators are tucked-in well enough. Honda specs the CRF250X with Renthal handlebars as well, a quality touch. Both are shorter and taller testers felt that the CRF’s layout was as comfortable as Baby Bear’s bed.

When it comes to details, we noticed. The CRF250X’s fit and finish as typical of Honda, which is to say excellent.  Things like the handy door in the left side panel that makes removing the air filter for easy servicing are great but we still think that Honda should fit hand guards and a full-coverage skid plate; the CRF250X has neither.

But when all is said and done, the Honda CRF250X delivers on its number-one mission, which is to be a fun and well-performing trail rig that will satisfy beginners without disappointing experts. The basic goods are there so that you can modify it to your heart’s content, and yet it is still plenty competent in stock trim. If we owned one, we would add some more off-road-worthy accessories such as a larger-capacity fuel tank, hand guards and a skid plate, before we even thought about messing with its EPA compliance by adding an accessory exhaust or messing with the carburetor settings.

Because, for what it is, the CRF250X is great right out of the crate. 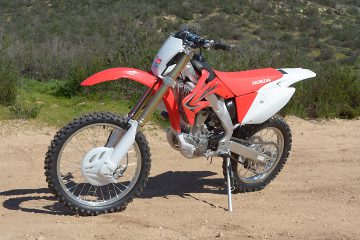