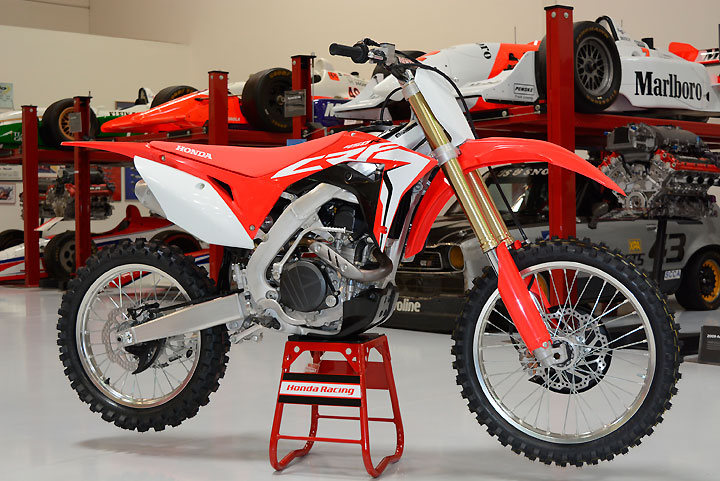 Rumors have been swirling for months about Honda’s plans to revamp its CRF450R motocross machine, and photos taken last year of various versions of the bike on the Japanese National motocross circuit only added to the debate about whether or not the 2017 CRF450R would feature an all-new DOHC engine to replace the Unicam SOHC engine that has been a Honda staple since the CRF450R’s inception in 2002.

So it was with much anticipation that we looked forward to August 10, 2017, when Honda invited DirtBikes.com and the rest of the U.S. moto press to its museum in Torrance, California, for the unveiling of the 2017 CRF450R, as those rumors would finally be put to rest. As it turns out, while the fifth-generation CRF450R may not be the motorcycle we anticipated, it may still be the CRF450R we had hoped for. Fitted with a higher-revving motor that is said to make more power and torque throughout the rev range and produce 60 horsepower at the crankshaft, the 2017 CRF450R gets a serious, 5.5-horsepower boost for a claimed 9.8-percent greater power-to-weight ratio (2.623 lbs./hp vs. the 2016’s 2.365 lbs./hp). Could that be enough to make it the new power king of the 450cc moto class?

But wait, there’s more: The 2017 CRF450R also boasts an all-new chassis and a new suspension that replaces the unpopular KYB air fork with a new 49mm Showa coil spring fork. The 2017 features provisions for an optional (Genuine Honda Accessory) electric start; the system requires two part numbers and is expected to come in at under $650, not including the battery.

Better yet, Honda also unveiled a surprise in the form of an all-new closed-course off-road model based on the new machine, the 2017 Honda CRF450RX, which features the electric starter as standard equipment along with a larger fuel tank, 18-inch rear wheel and suspension specs that are tailored for off-road use rather than motocross.

As has been the case for the past 15 model years, the CRF450R is based on Honda’s tried-and-true Unicam engine, but beyond that the bike shares very little in common with its predecessor. The new engine features architecture that is similar to the 2016 model, although it has been so radically revised that the two are far from interchangeable. The similarities include a 96.0 x 62.1mm bore and stroke, five-speed transmission and cable-operated clutch actuation. 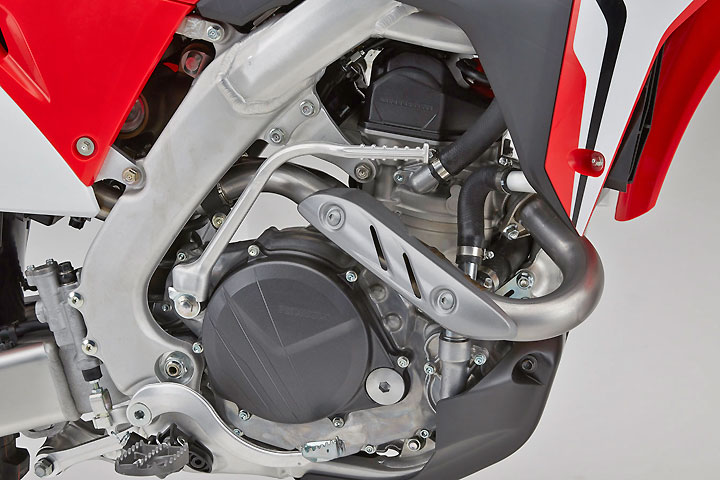 But the 2017’s more compact engine, boasts an all-new SOHC cylinder head with a new valve train arrangement that features a 2mm narrower valve angle and finger followers between the intake lobes and the intake valve stems whereas the previous engine’s intake valves were bumped directly by the intake lobes. A single, forked rocker arm with a DLC (Diamond-like carbon) coating still opens the exhaust valves. While a little more complex than before, the new valve train design allowed Honda engineers to overcome a previous design limitation by installing a more aggressive cam with .5mm more lift (now 10mm lift) on the intake lobes and .85mm more lift (8.8mm lift) on the exhaust lobe to increase the CRF450R’s power output.

Honda also fitted the valves with oval cross section valve springs. This type of valve spring is more advantageous than a conventional spring because it can handle higher loads and also offer reduced spring height at a given stroke, which makes it easier to make the valve train more compact. In this case, Honda also used the technology to lower the CRF450R’s overall engine height, making the engine more compact. The intake valves are also 2mm larger, going from 36mm to 38, and the valves seats are machined for smoother gas flow into the combustion chamber. Honda claims that the 2017 CRF450R’s intake efficiency is 19 percent greater while the exhaust efficiency is 10 percent greater than the 2016 model. 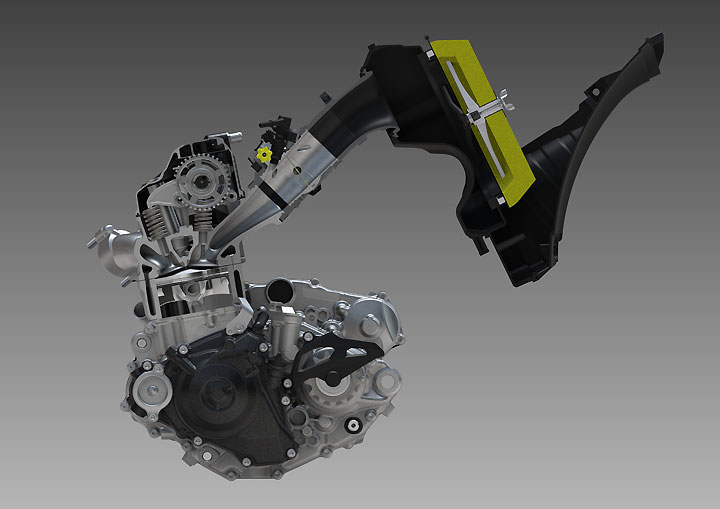 Honda made major changes to the CRF450R’s intake tract in an effort to pull even more power out of the new engine. The 2017’s airbox funnel is mounted as high as possible in the chassis, creating a straighter, downdraft intake layout that sends air straight into the engine rather than requiring it to make a gradual turn before it reaches the CRF450R’s 46mm Keihin PGM-FI throttle body.

The 2017 CRF450R’s new combustion chamber features a revised squish band for better mixing of the intake charge inside the cylinder, and a new piston helps to raise the compression ratio to 13.5:1, a full point higher than the 2016’s compression ratio. Since increased compression generates more heat, Honda revised the CRF450R’s oil jet, which cools the underside of the piston. The new jet features a four-hole piston rather than a two-hole piston for better oil distribution which is intended to reduce the piston temperature more effectively.

Speaking of oil the 2017 CRF450R also receives a revised oiling system with a new dual-stage scavenge pump that reduces pumping losses for greater efficiency, according to Honda. It also allows for a reduction in total oil volume from 1490cc to 1250cc, reducing weight inside the engine.

The clutch and transmission are also new for 2017. Take a look at the engine and you can see that the clutch appears to be mounted higher in the cases than before, but it’s also more compact because it uses one less disc and one less plate, going from 8/7 to 7/6. The new plates are thicker, but the overall clutch width is reduced 2.6mm, from 79.6mm to 77mm. The primary ratio is also revised, going from 23/63 to 28/66. The internal ratios in the 2017 CRF450R’s five-speed transmission are also revised. 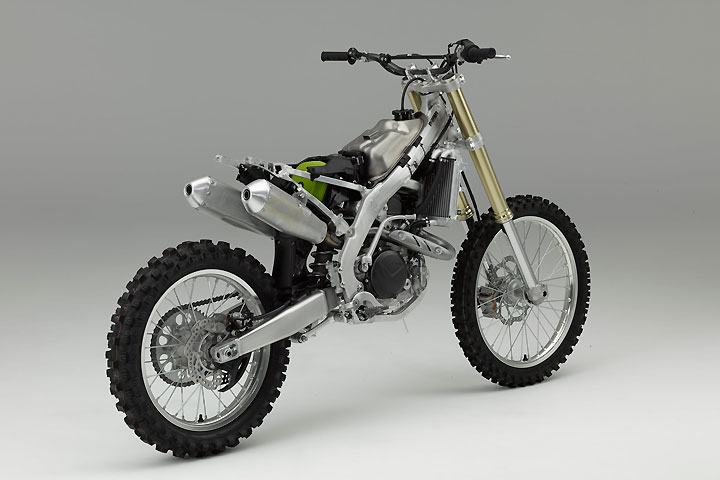 For 2017, Honda focused on improving the CR450R’s cornering capability and increasing its rear wheel traction. To that end, the 2017 features a sixth-generation aluminum twin spar frame that’s 30mm narrower from shroud to shroud and utilizes revised geometry and swaged spars that are claimed to reduce torsional stiffness by 6.8 percent while retaining the 2016 model’s lateral stiffness. The CRF’s aluminum subframe is also new, featuring a patent-pending extruded section where the seat mounts; it’s a claimed 200 grams lighter than the aluminum subframe and forged section found on the 2016 CRF450R.

The new chassis features a .4-inch shorter, 58.3-inch wheelbase, thanks to a 23.5mm shorter aluminum swingarm that’s also nearly a half a pound lighter to reduce unsprung weight while being stiffer than the previous unit—both vertically and laterally. The rake is also changed to a 27 degrees, 22 minutes (vs. the ‘16’s 27-degree, 4-minutes rake) and the trail is decreased 1mm from 117mm to 116mm, although the new triple clamp’s offset has been changed from 20mm to 22mm. Honda is confident that the new CRF chassis is stable enough that the 2017 model does away with its steering damper, although the mounting boss is still located on the triple clamp so that the previous CRF’s damper can be added as an accessory. Other dimensions include a 37.8-inch seat height and 12.9 inches of ground clearance. 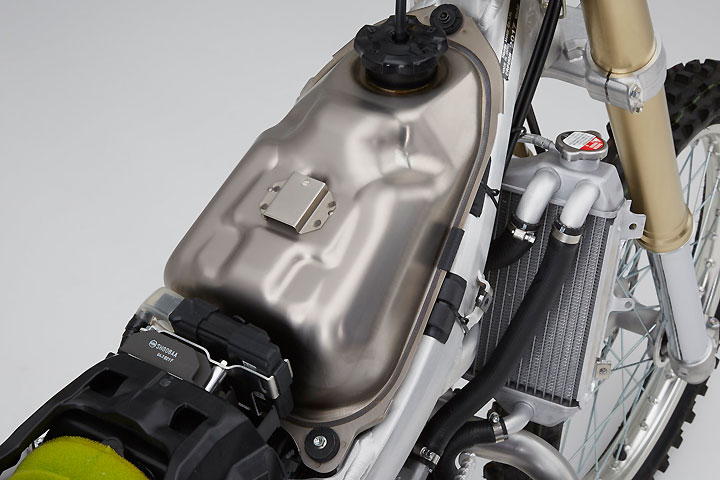 The 2017 CRF450R’s 1.6-gallon fuel cell may be the most trick item found on a production motocrosser, as it is now made of titanium. It is also slightly narrower than the 2016 model’s 1.7-gallon unit. Despite the exotic fuel cell, Honda claims that the 2017 CRF450R weighs exactly the same as the 2016 by its own measuring standards, checking in at 243 lbs.

We weren’t fans of the 2016 CRF450R’s 48mm KYB PSF fork, so we’re happy to report that Honda has given it the axe in favor of a good ol’ Showa coil spring fork for 2017. Honda officials say that returning to the spring fork came not only due to overwhelming demand by customers (and the customers are always right!) but also because the coil spring fork outperformed both the KYB and Show air forks during testing. The fully adjustable 49mm unit, which features the same internals as Showa’s race kit suspension, delivers 12 inches of travel up front. 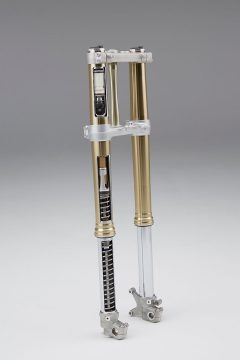 The 2017 CRF450R’s Pro-Link rear suspension has been completely overhauled as well. A slightly shorter, fully adjustable Showa shock features a top mount that is 39mm lower in the chassis to lower the bike’s CofG and to clear the new airbox layout,. The shock is also perfectly centered between the swingarm pivot points as opposed to the 2016 shock, which was mounted 5mm to the right of center. The rising-rate rear linkage has been revised. Honda says that the new arrangement shifts the load ratio rearward for improved traction. Rear wheel travel is 12.4 inches.

On the ergonomic front, Honda has cleaned up the switchgear on the 2017 CRF450R by incorporating the engine kill switch and the power mode select switch into one unit. The CRF450R still comes with 7/8-inch Renthal bars rather than fat bars because Honda says that testing showed the slimmer bars produced the desired flex for ergonomic comfort. 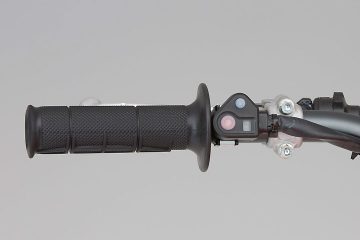 The 2017 seat is also slightly shorter at the tongue than the 2016 model, and the seat cover is also smoother to allow for easier rider moment when moving forward or backward. The CRF’s bodywork is also new, with narrower shrouds and narrower front and rear fenders, and the livery also features the now-popular in-molded graphics to keep the machine looking fresh for a longer period of ownership.

The 2017 CRF450R should be available in Honda dealerships in October, although final MSRP has not yet been set. For more information, visit http://powersports.honda.com. 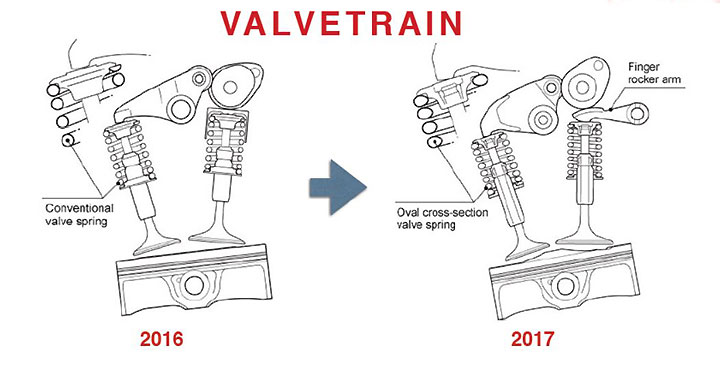