Just today, KTM announced the first high-performance electric motorcycle to join its North American lineup of off-road machines, and DirtBikes.com was on-hand at Wildomar OHV Park in Wildomar, California, to not only view the machine up close but also to take it for a spin.

But first, the press release:

KTM Introduces its High-Performance Electric Motorcycle to the North American Lineup through a Limited Edition Pilot Program
MURRIETA, Calif. – As the global high-performance electric motorcycle market continues to grow, KTM is pleased to announce the launch of a READY TO RACE pilot program in North America involving the KTM FREERIDE E-XC, an electric version of the already-familiar KTM FREERIDE 250R motorcycle. 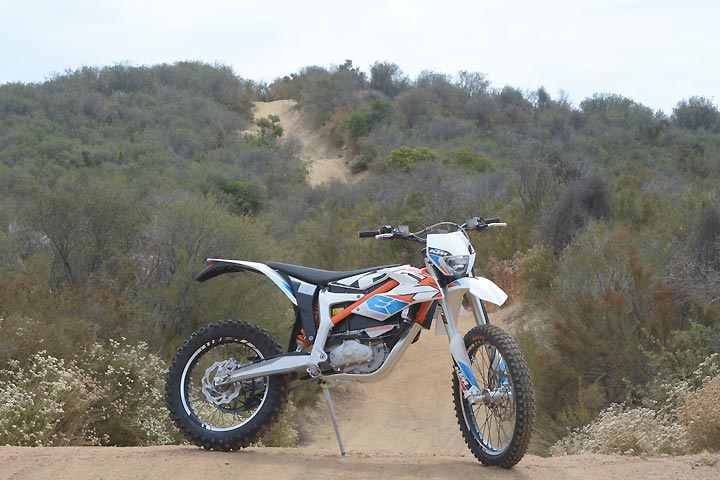 Through this pilot program, the KTM FREERIDE E-XC is available in limited quantities and sold exclusively through select authorized KTM dealers in the U.S. Each of the 11 select dealerships have been certified through KTM’s high voltage technical training in order to service this new technology.

Tom Etherington, VP of Sales, KTM North America, Inc.: “KTM has created this pilot program as a way to better understand the level of consumer interest in electric motorcycles, which will assist us in future planning when considering serial production of electric motorcycles in the coming years. The exciting part for consumers is that through this pilot program, the FREERIDE E-XC is available for a price that is substantially less than these models would sell for outside of this program.”

KTM North America, Inc. is proud to venture into the zero-emission vehicle world with a purpose built motorcycle that could open the door to new and exciting riding areas and applications in the future.

So, just what is the Freeride E-XC, and what’s it like to actually ride?

In truth, the Freeride E-XC has been around in Europe for a few years, where the push for zero emissions vehicles is much stronger than it is in the U.S. It’s the first all-electric motorcycle ever to be produced by KTM. According to KTM North America officials, the mothership in Austria has been seeking a way to introduce the model in America for some time, and with 11 dealers signing up for the pilot program to gauge sales of the bike, the decision was made to offer it to American consumers.

Based on the successful KTM Freeride 250R, the Freeride E-XC replaces the 250R’s liquid-cooled two-stroke internal combustion engine with a KTM-designed and -manufactured brushless permanent magnet synchronous motor producing a claimed 31 lb.-ft. (42 Nm) of torque from 0 rpm and 22 horsepower a 4500 rpm. The motor is designed to require little in the way of regular maintenance. KTM recommends only a small oil change every 50 hours. To help keep the motor from overheating, the Freeride is liquid-cooled, with two tiny radiators circulating coolant with the help of an electric water pump. The motor does not have a clutch or transmission—just gas it and go. In order to increase durability, the torque is transferred through a gear reduction unit to a jackshaft located just behind the motor. KTM says the jackshaft was necessary to prevent breakage from shock to the drivetrain during the course of normal off-road riding.

The really nifty handiwork is in the Freeride E-XC’s 260V, 2.6 kWh lithium-ion battery pack that KTM claims can be fully charged in 80 minutes and take an 80% charge in 50 minutes. KTM claims that the average riding time for a full charge is about 60 minutes. Held in place by just four bolts, the easily removable pack houses hundreds of tiny AA-sized batteries and weighs about 38 lbs., according to KTM officials. The Freeride EX-C’s $8299 MSRP includes a charger that requires 220-volt electrical service to operate. KTM will sell additional battery packs to customers wishing to maximize their riding time on the Freeride E-XC, but the packs aren’t cheap, retailing for $3600. KTM also mentioned that due to the sine wave requirements of the packs, they will not accept a charge when the battery charger is plugged into a gasoline generator.

The battery pack also houses a sophisticated ECU that features three riding modes to tailor the power delivery. Mode 1 or “Economy” is the most gentle, and is claimed to be excellent for beginners. Mode 2 or “Standard” offers a more spirited, enduro-ish power delivery while somewhat muting the throttle response. Mode 3 or “Advanced” offers the liveliest throttle response and delivers the full torque to the Freeride E-XC’s rear wheel almost instantaneously, which should make it the choice for high-traction terrain and/or aggressive “freeriders.”

The motor and battery pack reside in a modified version of the Freeride 250R’s WP-designed chassis, which is a mixture of steel, aluminum and composite material and uses the motor as a stressed member. The chassis is no foo-foo, beefed-up mountain bike unit, and KTM claims that some of its riders, such as former AMA EnduroCross Champion Cody Webb, have punished the Freeride E-XC while pulling off some amazing feats without a failure. That isn’t so surprising since the Freeride E-XC’s suspension is motocross-grade, having come from the latest version of the KTM 85 SX mini-motocrosser. Up front, CNC-machined triple clamps anchor a 43mm WP open-cartridge fork with adjustable compression and rebound damping and 9.8 inches of travel. Out back a WP PDS shock also features adjustable rebound and compression damping and 10.2 inches of travel.

The Freeride EX-C rides on a 21-inch front wheel and Maxxis TrialMaxx 2.75-21 tire. The rear wheel is an 18-incher shod with a Maxxis MaxxEnduro 120/90-18 tire. Braking is via a Formula 260mm front brake disc and four-piston caliper and 230mm rear disc with a two-piston caliper. Both brakes are activated by levers on the handlebar—front brake on the left and rear on the right. There is no rear brake pedal, although KTM told us that the Freeride 250R’s rear brake pedal, master cylinder and brake line can be swapped onto the Freeride E-XC by customers who prefer more traditional motorcycle braking controls.

KTM hooked us up with a good 4 hours of riding time on the Freeride E-XC at Wildomar OHV Park to give us a solid impression of the bike, and while we’re not quite ready to jump ship from our beloved fossil fuel burners, we couldn’t help but have fun on it. Activating the motor is a simple matter of turning on the key, bumping the run switch and then thumbing the starter button. Once you hear the whir of the electric water pump, you know you’re ready to motivate. Switching the ride modes is a bit tricky and takes a little practice to get the timing down in order to move from mode to mode. The good news is that the Freeride E-XC always remembers the last mode that was activated, so you only have to do it once if you’re happy with the mode you’ve selected.

Right off the bat, we preferred the Standard mode, which wasn’t too jumpy under a heavy throttle hand and yet delivered a fair dose of the available power from the motor. We suppose there’s no better way to describe the power delivery than to say it is “electric.” The Freeride E-XC accelerates with authority, and it’s rear Maxxis MaxxEnduro provided plenty of traction even in the slick and silty conditions we encountered in Wildomar. The throttle response is slightly delayed no matter what mode you’re in, but the power curve is linear and easy to control. “Economy” mode really tames the hit, and our experienced riders didn’t spend much time in it. Once we got used to riding the bike, we quickly switched to the “Advanced” mode and kept it there.

“Advanced” mode unleashes all the available power, and it really gets the Freeride E-XC cooking on tight trails. We were surprised at just how quickly we were able to get used to the motor’s spritely power and focus on the bumpy single-track trails on our test loops. Acceleration is brisk, and the bike can really get moving toward its maximum 6600 motor rpm, making it a real hoot to ride. The only time we ran into a traction issue was when trying to get going from a dead stop on a steep, blue-grooved uphill. With the motor willing to dump all of its available torque to the rear wheel right at the hit of the throttle, it’s easy to spin the rear wheel in low-speed technical terrain.

Our only real gripe was that the Freeride E-XC’s hand-operated rear brake lever action felt pretty wooden, and it didn’t take long before we simply took the all-or-nothing approach to riding the bike, sliding it into corners and then applying a heavy dose of throttle to regain the lost momentum. The front brake felt a little better, but we found ourselves really only using it on the steeper downhills we encountered.

Not that the Freeride E-XC has any handling issues—it really doesn’t. KTM likens the chassis more to that of a trials bike than an off-road bike, but its 23° steering head angle and 55.8-inch wheelbase simply felt more like a quick-handling enduro bike than a whippy trials bike at higher speeds. We couldn’t detect any headshake at the trail speeds we attempted. While the Freeride E-XC is no feather, checking at a claimed 238.1 lbs., its smallish feel and slim, comfy ergonomics (seat height is 35.8 inches) made it feel lighter than it really is. We were also pleasantly surprised that the weight bias appears to put enough on the front end to give the rider a confident feel in flat and loose turns despite the relatively non-aggressive tread pattern of the TrialMaxx front tire. The Freeride E-XC was happy to go wherever it was pointed, and its center of gravity felt low even with the hefty battery pack riding so high in the chassis.

With 13.4 inches of ground clearance, we didn’t have to worry about whacking the bottom of the motor on rocks or other obstacles, and the WP suspension did a pretty admirable job of taming the bumps. After a couple loops, we opted to take some compression out of the front to get it to settle into its travel easier and be more balanced with the rear suspension, then we just left it be. The Freeride E-XC is happy to fly of jumps and still offer reasonably cushy landings.

By the end of our test session, the 2017 KTM Freeride E-XC proved to be a competent trail bike no matter what we threw at it, and we’re relatively certain that most riders would find it to be no slower or less comfortable than their normal internal combustion engine-powered machines once they got used to it. That said, the only real issue with the powerplant is the same old one that electric-powered machines continue to battle—range. If you like to ride long distances, you’re straight outa luck with this particular KTM. However, if you like to ride short, tight loops, the Freeride E-XC can run with the best of them. 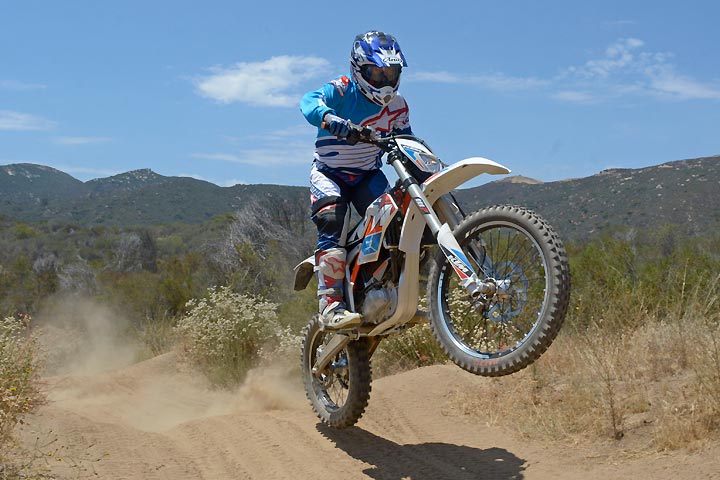 All that’s left, then, is to decide whether or not you want to pony up the $8299 asking price for a unique trailbike that delivers maximum fun with minimal environmental impact. KTM officials told us that about 100 Freeride E-XCs will be available through the 11 dealers in its pilot program, and it will be interesting to see just how well they sell. If the answer turns out to be “not well,” then the reason will have to be something other than lack of performance and lack of fun. That’s something that the Freeride E-XC provides as well as any other KTM we’ve ridden. For more information on the Freeride E-XC, check out www.ktm.com. 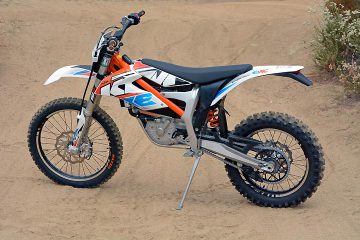