Maybe it should come as no surprise that the Frenchman scored the win, as he has clearly been one of the hottest riders of the 2017 supercross and motocross season, and he capped off a breakout year in the 450cc ranks by winning the $1 million bonus for claiming all three main events at the 2017 Monster Energy Cup. With today’s announcement of three more MEC-style races being incorporated into a Monster Energy Supercross Triple Crown as part of the Monster Energy AMA Supercross Series, Musquin should be well-equipped to handle the format changes that are part of the 2018 series.

That, of course, leaves the Red Bull Straight Rhythm format to stand alone. The four-year-old race is essentially a supercross-style drag race in which competitors race two at a time over a 1/2 mile-long supercross section that forces them to execute perfect rhythm if they want to advance to the next round.

Musquin made it clear that he was keen to defend his 2016 Red Bull Straight Rhythm title when he posted the fastest qualifying time of the nigh in the Open class. His quarterfinal opponent was none other than reigning FIM SuperEnduro World Champion and AMA EnduroCross Champion Colton Haaker. Musquin handly outran the Rockstar Energy Husqvarna rider, and with Haaker not taking part in the second of the best two-out-of-three runs, Musquin advanvced to the semifinals and a meeting with Kyle Chisholm, whome he defeated to line up for a chance to defend his title in the final.

On the other side of the ladder, Josh Hansen was just as fast, and the Suzuki man blitzed through his races to face off against Musquin for the Red Bull Straight Rhythm crown.

Musquin shot out of the start house to take the early lead in the first race of the final, but Hansen refused to go down without a fight. The two ran close together until Hansen made a mistake just before they hit the grandstand section, allowing Musquin to escape and gain a leg up on the title. In the second race, the two ran close early, but Musquin simply made no mistakes and was able to inch away from Hansen and claim the win. Musquin celebrated by throwing one of his classic heel clickers over the finish line.

“I had a great weekend coming off Monster Cup,” Musquin said. “Red Bull Straight Rhythm is such a cool event, and everyone had a great time. The fans were really excited. I was able to win everything, so it’s pretty special for me. I’m looking forward to next year.” 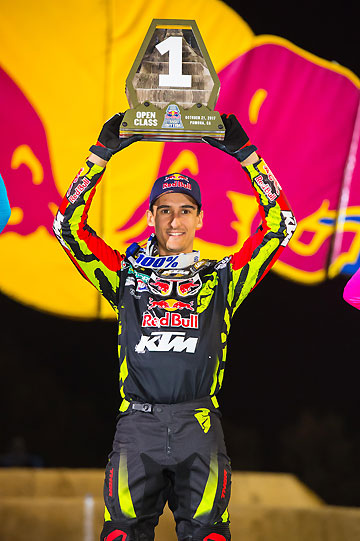