The two staged an epic battle for the 450cc main event win before 40,682 fans at Petco Park in San Diego, California, Saturday night, finishing in the same positions they did at the season opener in Anaheim, but this time Roczen’s margin of victory was nowhere near the 16 seconds he enjoyed at Angel Stadium. In fact, this time the win wasn’t decided until the last lap. Roczen’s margin of victory in the 20 minutes-plus-one-lap main event was just under 2.6 seconds, and even that margin belied just how close the race was between the two former teammates and title rivals.

Dungey pulled the holeshot at the start of the main event with teammate Marvin Musquin second and Roczen third, but Musquin made a mistake on one of the first jumps and went off the track, sliding through a mud hole that was a remnant of recent rains. The Frenchman kept his cool and rejoined the race in third place.

Roczen then shadowed Dungey for seven laps as the two pulled clear of the rest of the field. Roczen went bar to bar with Dungey a few times but was unable to make a pass for the lead. Finally, the opportunity came when Dungey made a slight mistake, allowing Roczen to cut underneath the champ in corner and take the lead.However, rather than resign himself to second place, Dungey then shadowed Roczen, and he was able to keep pace with the Honda man for almost the entire rest of the race.

Dungey stepped up the pressure on Roczen with two laps to go, and he pulled alongside Roczen at one point before a bobble in one of Petco Park’s rhythm section allowed Roczen to escape and claim the  11th 450cc Supercreoss win of his career.”Ryan [Dungey] kept me on my toes,” Roczen said. “The track broke down and it was really rough out there, but that’s the fun part. I hope the fans enjoyed it. That’s what they want to see [a battle for the win]. I’m actually happier with this weekend’s win than last weekend’s. I’m happy to be up here again. Another day in the books, and I’m looking forward to next weekend.”

Dungey’s runner-up finish was the 90th podium of his professional career and his 35th in the last 37 races.

“I had two spots where I thought I could [make the pass] and I made a mistake before each of them,” Dungey said. “I came in too hot into one of the corners. I knew it was the last lap and I was trying hard. We fought to the end. It was an intense race. It was good because I led a little bit, and then he led. We were really pushing the pace, and if you’re going to race someone like that, it’s going to be a battle to the end.”

Musquin ran alone in third place for most of the race.

“When I crossed the finish line I was happy with third but not happy because Ryan [Dungey] and Ken [Roczen] were really, really fast,” Musquin said. “Right before halfway through the main, they started to gap me, and I started to tighten up a little bit and slow down a little bit. So I’m not too happy, but we’ll take third tonight.”

With the win, Roczen extended his lead in the 2017 Monster Energy AMA Supercross Series to six points, as he now leads Dungey 50-44.

The battle for fourth through sixth place was almost as exciting as the battle for the lead. Team Honda HRC’s Cole Seely, Monster Energy Kawasaki’s Eli Tomac and Rockstar Energy Husqvarna’s Jason Anderson ran nose to tail at the halfway point in the main event, but Tomac was able to blitz past Seely for fourth by connecting two triples together in one of the rhythm sections. Anderson caught Seely at the end of the same section and dove underneath him to steal away fifth place on lap 12. Anderson then charged after Tomac, and the two collided while coming out of the turn just past the finish line jump on lap 13. Anderson was inside of Tomac, and he was able to move into fourth place. Seely then went to school on Tomac and was able to repass him for fifth place on lap 18. That was the way they crossed the finish line.

“I had to come through the pack again tonight,” Anderson said. “I got fourth, but I’ll be better next weekend. The track was kind of sketchy, but I’m pumped with how I rode. I just want to be up in the front.”

The 2017 Monster Energy AMA Supercross Series returns to Angel Stadium in Anaheim, California, for round three on Saturday, January 21. 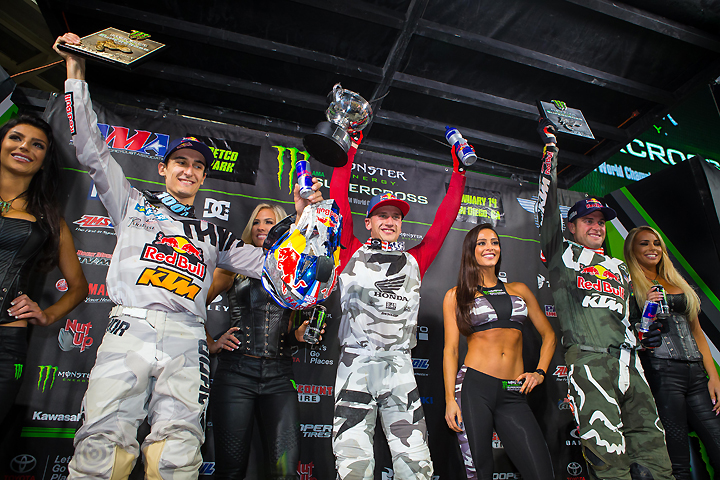