When we first learned that Suzuki was re-entering the big-bore off-road market with its 2017 Suzuki RMX450Z, we were stoked.

Then we learned about the Suzuki RMX450’s technical details, and we were beyond dismayed. The notion of a 450cc off-road single that could only wheeze out 16 rear-wheel horsepower didn’t just sound unreal, it sounded like a downright sham. But the RMX450Z isn’t a sham. It’s actually a fairly fun off-road motorcycle in the right environment, but that also means eliminating its legal capability so that it cannot legally be ridden in any environment.

See, the Environmntal Protection Agency has strict regulations governing exhaust emissions on off-highway vehicles that are certified for use on public land. As of now, the regulations specify that model years 2007 and later must adhere to an HC + NOX standard of 4.0 g/km and a CO standard of 35 g/km. In order to get the RMX450Z to comply with these standards, drastic measures had to be taken. The most dramatic of these was a restriction of the air into and out of the engine via the addition of a stop screw in the RMX’s 41mm Keihin throttle body to limit the butterfly from opening more than 32.9 degrees instead of the usual 90 degrees. To regulate the RMX’s noise emissions, Suzuki also fitted a snorkel on top of the airbox and a tiny outlet pipe in the endcap of the RMX’s large volume aluminum muffler.

While other manufacturers have had to comply with the same regs, for some reason the RMX450Z tends to suffer from them to a greater degree. During our dyno test at Mickey Cohen Motorsports, we were shocked when the RMX450Z tdidn’t even manage to make the full 16 rear-wheel horsepower that even Suzuki officials promised. It came close, but 15.7 rwhp @ 6600 rpm is not 16 horsepower by anyone’s reckoning.

In fact, it’s downright pathetic, especially since even though it is an older generation of the venerable RM-Z450X, the one used by Chad Reed and Ryan Dungey to dominate the AMA professional motocross and supercross ranks at the turn of the decade, on paper the RMX450Z’s 449c, liquid-cooled, fuel-injected, DOHC engine is not a turd. Its 96.0mm x 62.1mm bore and stroke free-flowing cast-aluminum, four-valve cylinder head that features a narrow included valve angle of 21.5 degrees is capable of so much more. Sure, the RMX’s camshafts have less lift and duration than the RM-Z’s, which keeps the X’s titanium 36mm intake and 31mm exhaust valves closer to their seats, and its compression ratio is a milder 11.6:1 compared to 12.5:1 for the RM-Z. So we did what most people would do. We yanked the bolt out of the throttle body and pulled the airbox snorkel and peashooter exhaust outlet, then ran it again.

Of course, the bummer was that in order to get a fair assessment of the RMX450Z in EPA-legal trim, we had to ride it with of the emissions controls in place, and when we did, we weren’t disappointed to be disappointed. Out on some of our favorite local trails, the RMX450Z was a downright dog. With its anemic power, the RMX struggled to get up hills and through technical sections that the 2017 Honda CRF250X we had a long was able to handle without any difficulty. The RMX felt extremely heavy and sluggish, and none of our test team enjoyed having to furiously row the RMX’s buttery smooth and positive wide-ratio five-speed gearbox in order maximize what power was available. At least, the RMX450Z’s cable clutch is smooth, linear and durable enough to be hammered without fading. The RMX450Z transmission ratios differ from the RM-Z450 in that the RMX’s first three gears are steeper and its fourth and fifth gears are taller. The RMX450Z’s final drive is only slightly steeper, 13/51 vs. 13/50.

We can also appreciate the RMX450Z’s convenient electric start capability. Thumbing the starter button spins the starter while an automatic decompression system the exhaust cam hangs the left exhaust valve open to reduce compression up to 1500 rpm. Unfortunately, unlike other bike’s the Suzuki also features an on/off switch on its instrument cluster that one must remember to turn off when the bike is put away. Failing to do so will kill the battery (go ahead, ask us how we know). Yes, there is still a kicstarter for back-up, but we found that the RMX can be a bear to start via the kickstarter.

After our initial testing in EPA-compliant mode, we quickly removed the airbox snorkel, the pipe in the muffler to evaluate the RMX450Zs full potential in “stock” mode, and it should come as no surprise that it’s a hell of a lot better with the emissions equipment removed. The uncorked RMX delivers decent low-end punch along with a mid-range and top-end that are smooth but not all that authoritative. That said, Suzuki claims that the RMX450Z isn’t really designed to be a racer, rather it is more of a stout trailbike. We can buy that, as the Zook is fun as long as you aren’t trying to wring every pony out of it. We were left wishing for more power or, at the very least, the opportunity to alter its power character by swapping DFI modules like you can with an RM-Z450. Unfortunately, even though the RMX450Z does have the power coupler plug, it is inoperable, and the RMX’s ECU cannot be remapped. Suzuki claims that the stock map is designed to maximize the available power, but we’re skeptical of that.

The Suzuki RMX450Z’s aluminum twin spar chassis isn’t taken straight from the 2017 Suzuki RM-Z450. Instead, it’s similar to that of the 2009-2010 RM-Z450, and it has been re-tuned to give it better flex characteristics for off-road use. Look at the swingarm and you’ll see that it is also taller vertically than the RM-Z’s when viewed from the side. Suzuki says this was done to optimize the flex. With its 58.5-inch wheelbase, 29° 18’ (’= minutes) rake and 5.1-inch rake, you would expect it to turn well, and cornering may be the RMX’s strongest suit. With the added weight of its electric starter, battery, lighting and other items, the RMX tips the scales at a rather portly 271.2 lbs. even with its rather smallish 1.6-gallon tank filled to capacity, placing 127.6 lbs. on the front wheel and 143.6 lbs. on the rear.

The RMX steers and tracks extremely well when leaned into a bend. All of our testers noted that while the bike does feel heavy, the added weight doesn’t detract much from the type of precise and quick handling for which Suzuki RM-Zs are practically legendary. Whether on flat ground, in a bermed corner, hard-packed adobe or loose sand, the RM-Z carves well. It’s a different story in a straight line at higher speeds, however, as the RMX’s motocross-bred chassis is still too stiff for our tastes. Some testers complained that they could really feel every bump through the footpegs, and the chassis deflects off rocks and roots too willingly, requiring that the rider pay attention and keep a firm grip on the handlebars. More flex in the chassis would definitely help.

At least that’s our take, as the RMX’s Showa coil-spring fork and fully adjustable the rear shock are clearly valved on the soft side. That equate to 12.2 inches of travel that is plush at lower speeds but tends to be mushy when the pace is pushed. Dialing more compression damping helps to prevent bottoming in G-out hits, but it only exacerbates the chassis issues we experienced. Overall, we’d rate the suspension as pretty good for its intended trailie mission, and at least one tester commented that he would love to try a properly valved RMX coil spring fork on the RM-Z450. That’s either a decent compliment or  slap at the RM-Z fork.

We have no complaints with the RMX450Z’s brakes. The 250mm front and 240mm rear discs, both clamped by Nissin calipers, offer plenty of whoah power, and not because the RMX is slow, because in closed-course mode, it isn’t. The binders have a linear feel and do an excellent job of controlling wheel speed no matter how fast you much you are pushing the pace.

And the RMX is comfortable. Its slim yet well-padded seat perches the rider 37.4 inches from the ground, and its cockpit is spacious enough to provide plenty of room for the rider to move around whether in standing attack mode or seated mode.

As far as the details go, some of the RMX450Z’s are winners. Quality Excel rims are found in the appropriate off-road-sized 21-inch front and 18-inch rear shod with Dunlop D742FA front and D756 rear tires. The front wheel is an RMX-specific model that features the sensor required for the RMX’s neat multi-function LCD computer. The unit features two modes, standard and sport. Standard mode functions include a speedometer, odometer, clock, dual trip meters and a voltage meter. Sport mode adds a timer, average speed and a trip meters, and the function of the computer is pretty intuitive. The RMXalso comes with a plastic skid plate, rear disc and rotor guards, fork guards and a steel side stand as standard equipment, but it lacks handguards, which we feel are a must for any serious off-road machine.

At $8999, the RMX450Z isn’t all that much of a bargain, and it definitely doesn’t deliver much joy with the emissions equipment choking its motor, but if you ride on private land or on a closed course, that’s an easy fix. What you’re left with is a motorcycle with a lot of potential that really needs a fatter fuel curve and a more compliant chassis in order to truly rock through the rocks. But if you’re a casual trail rider who is a fan of the Suzuki brand, it’s definitely worthy of consideration. 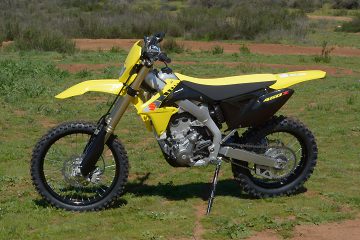