The following is from Racer Productions, regarding the announcement of the 2018 AMSOIL Grand National Cross Country Series (GNCC):

MORGANTOWN, W.Va. (December 14, 2017)–Racer Productions, producer of the AMSOIL Grand National Cross Country Series (GNCC) , an AMA National Championship, is pleased to announce the 2018 series schedule. The 13-round GNCC series takes place in nine different states through the eastern half of the United States, making stops at many of the series’ traditional favorites, while adding three all-new venues to the schedule. 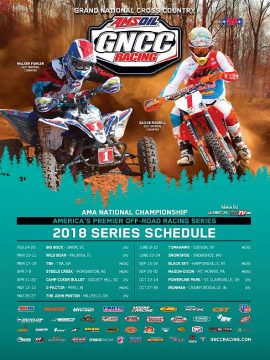 The GNCC series will kick off with the Big Buck GNCC on February 24 and 25 in Union, South Carolina, then continue to the Wild Boar GNCC in Palatka, Florida, held in conjunction with the 2018 Daytona Beach “Bike Week” festivities on March 10 and 11. The Big Buck and Wild Boar GNCCs will also play hosts to the opening rounds of the six-race UTV championship.

After Florida, the AMSOIL Grand National Cross Country Series continues to its first new venue of the season in Georgia. This new location in the Peach State will be announced in the coming week and promises to incorporate the same grueling obstacles that GNCC racers are used to, while adding a new batch of terrain they have yet to experience.

“We’ve taken the time to develop a one-of-a-kind GNCC schedule, and it’s already shaping up to be a great season,” explained GNCC Trail Boss, Jeff Russell. “The three new venues all have something different to offer and should be an instant hit with the GNCC Racing Nation.”

After summer break, the series will grace another new facility in Harpursville, New York for the Black Sky GNCC. The Johnson Family Farm is no stranger to woods racing where they have hosted a few local off-road events, but still offers plenty of virgin woods for the GNCC track crew to develop a unique and brand-new course.

The Mason-Dixon GNCC will be the following round on the weekend of September 29 and 30 in Mount Morris, Pennsylvania – another hotbed for off-road racing. Located adjacent to High Point Raceway, the racetrack will travel across the Mason-Dixon line with sections in both Pennsylvania and West Virginia.

“It’s been over 15 years since we’ve been at the High Point Raceway property” continued GNCC Trail Boss Jeff Russell. “By being able to host and start the race on the Mathews Farm, we are excited to layout a brand new track that will cross over to one of America’s most iconic motocross tracks, as well as travel between Pennsylvania and Racer Productions’ home-state of West Virginia.”

Following the season opener in South Carolina, the UTV championship will head to Florida for the Wild Boar GNCC before travelling to Moree’s Sportsman’s Preserve for the Camp Coker Bullet GNCC, then Ohio’s John Penton GNCC and back to Ohio for the penultimate UTV round at Powerline Park. The Side-by-Side championship will conclude with the Ironman GNCC season finale in Crawfordsville, Indiana.

The six-race ATV and Bike Micro 50cc championship will begin at the new round in Georgia, before heading to North Carolina for their second round at Steele Creek, then to Indiana for the X-Factor GNCC, on to New York for the Tomahawk and Black Sky GNCCs, then concluding in Pennsylvania at the Mason-Dixon GNCC. 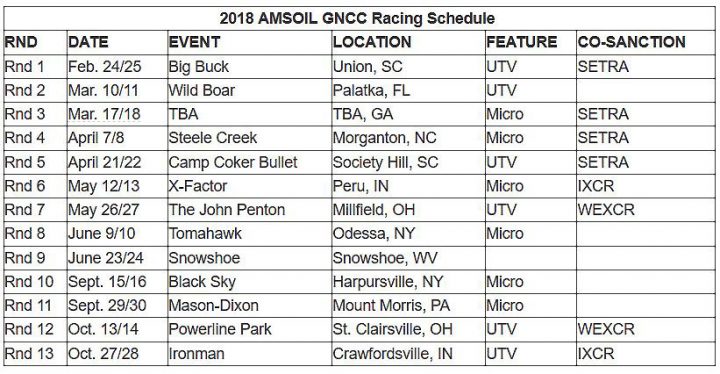