The now defunct Oldsmobile automobile company used to have a marketing slogan designed to inject some excitement into the brand: “This is not your father’s Oldsmobile.” After swinging a leg over the 2018 Gas Gas 250 EC and 250 XC on a warm, sunny day today in Southern California, we might suggest a similar one for the reborn Spanish motorcycle company: “No se trata de Gas Gas de su padre!”

Because it sure as hell ain’t.

Spared from certain death after being purchased by Spanish electric motorcycle manufacturer Torrot with help from investment firm Black Toro Capital in November 2015, Gas Gas began a complete revamp of its trials and off-road motorcycle line immediately thereafter, and the 2018 off-road models are proof positive that Torrot is serious about building the Gas Gas brand into a major contender for 300cc two-stroke off-road supremacy. You can read up on all of the technical changes made to the 2018 Gas Gas 300 models here. The short answer is that both bikes are virtually identical in spec., the EC 300 is the Enduro model, equipped with lights and an enduro computer, and the XC 300 is the cross country version, which means no lights, no computer and a little less in the way of electrical gear. Gas Gas has yet set the MSRP for either the 300 EC or the 300 XC, we expect both to come in under $9000.

Our all-too-brief time with the new 300 EC and 300 XC took place at Motoventures.com’s Dirt First Rider Education Center in Anza, California. Run by industry veteran Gary LaPlante, the 350-acre facility is an outdoor classroom for new and experienced riders alike, offering a smorgasbord of fun trails that are used to teach trials and off-road riders how to become better trials and off-road riders. Gas Gas also had a star-studded cast on-hand to debut both of its new 300 models, including former factory Yamaha motocross and supercross start Damon Bradshaw, 1993 AMSOIL GNCC Champion Fred Andrews, 1994 AMA National Enduro Champion and six-time ISDE gold medalist Steve Hatch, and 10-time AMA National Trials Champion Geoff Aaron, the latter laying out a nice single-track course throughout the Dirt First facility for us to test the performance of both the EC and the XC.

Gas Gas motorcycles have always been known for having stout engines, but the bigger news for 2018 is that the EC and the XC share an all-new chassis and suspension. Gone is rigid perimeter frame of previous generations, and in its place is a Chrome-Moly backbone/double cradle design that bears a striking resemblance to KTM’s two-stroke off-road chassis. Likewise, a genuine KYB fork and shock do away with the recalcitrant mish-mash of components that included a Marzocchi fork and Reiger shock. 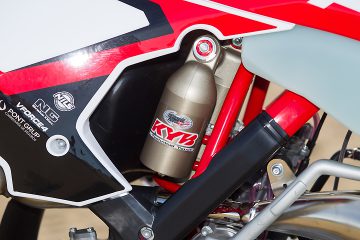 That’s the first thing we noticed when hustling the EC 250 around the loop. Even without a proper setup—our 2018 test units were so new that we were literally breaking them in as we rode them—the difference in the Gas Gas’ ability to soak up small ripples and large G-outs when compared to the previous suspension was dramatic. The 48mm closed-cartridge, spring fork, which features the compression damping adjusters at the top of the fork legs and the rebound damping adjusters at the bottom of the fork legs, was initially stiff, but it only took a few miles to begin to work in concert with the fully adjustable KYB piggyback shock out back, delivering 11.8 inches of plush yet controlled ride at both ends while we were making our way around the test loop. 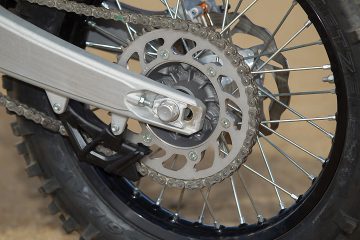 And the new chassis feels so much lighter and slimmer than the 2017 version that you almost can’t believe that both generations were made by the same company. Gas Gas claims that the new chassis is 20 percent lighter, and it feels like it. Its reduction in torsional stiffness makes the EC and XC a whole lot more forgiving while retaining the lightning-quick steering of previous Gas Gas models. The new chassis is mated with an aluminum subframe that’s 15 percent lighter and a new swingarm design—Gas Gas officials tell us it’s the first new swingarm in 10 years—that is seven percent lighter. The swingarm also receives a new chain tensioner system that is claimed to make chain adjustment easier.

Although our test loop was tight, it’s clear that the 2018 chassis’s quick and light-steering character doesn’t come at the expense of stability. The 300s track straight and true over bumpy ground, and they feel light and flickable when taking to the air. They’re night-and-day better than the 2017 models.

And about that engine: Power delivery has been improved via a number of changes, including a new crankshaft, a new cylinder and cylinder head. A Keihin PWK 38mm carburetor feeds the Gas Gas-recommended 50:1 fuel mix through VForce reeds into the cylinder. The carb has no throttle position sensor, and yet throttle response is very good. We noticed that the XC model in particular felt a little fat right off idle even though the air screw was turned all the way out, but the power cleans up nicely as soon as the engine builds a few revs—and again the bikes were practically right out of the crate. The spent fuel charge exits the exhaust port and blows through a double-walled expansion chamber on the EC and a Gas Gas-spec FMF unit on the XC; that is the only difference in the tuning specs between the two models. Both are silenced by an FMF Powercore 2.1 muffler. Interestingly, the ECs in our test group were also fitted with spark arrestors, but Gas Gas tells us that neither the EC nor the XC will be equipped with a spark arrestor when they leave the dealerships. 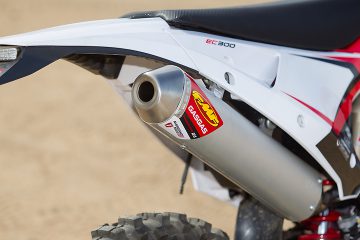 The pipe and spark arrestor combo definitely made a noteworthy difference in the power delivery on the EC when compared to the XC. Both engines can chug along at trials bike speeds, but our test EC felt a whole lot more linear than the XC. Both will pull with authority, but the XC does so with a lot more snap throughout the rev range. The EC simply feels smoother and tends to work better on tighter and more technical trails, especially for novice riders, whereas the XC is clearly going to be better in wide open spaces and/or for more aggressive riders. Either way, tractabilityb is the strong suit of the Gas Gas 300 engine.

Both models feature six-speed transmissions that are fed power through a Magura hydraulic-assisted clutch. The clutch pull is smooth and linear. However, veteran motojournalist Adam Booth, a DirtBikes.com hired gun for the day, noticed that there is a slight gap between second and third gear, and we got a tip from none other than Bradshaw, who has come out of retirement to contest the AMSOIL GNCC Series, that he adds four-teeth to the rear sprocket of his race bike to tighten up the gearing. Still, with the Gas Gas’ engine’s flexible power delivery, we’d have to say that the stock gearing works pretty well overall.

For 2018, Gas Gas has switched to NG discs front and rear while retaining the Nissin calipers and master cylinders. The 260mm front and 220mm rear binders do an excellent job of slowing the EC and XC’s roll without being grabby or wooden in feel. Nice.

If we have to gripe about anything, it’s that the 90/90-21 front and 140/80-18 Metzeler Six Days tires are simply not a good choice for the silty, dry conditions that are the norm in Southern California. The tires imparted a vague feel, and front end traction was a hard to come by in the sand. If we owned a 2018 Gas Gas, these tires would get the heave ho immediately.

Ergonomically speaking, the EC and XC are very comfortable motorcycles, with a slim layout, a comfortable gripper-style seat and footpegs that offer a stable platform for the rider’s boots. Booth mentioned that he prefers the bend of the handlebars on the XC over the bend on the EC.

Of course, electric starting is one of the nicest features of the Gas Gas two-strokes. There’s still a kickstarter in place as a back-up, but the Lithium-ion battery-powered starter fires up the bike with ease. Other nice details include a new fuel tank that boasts a larger capacity—2.6 gallons—thanks to the redesigned chassis, and a new airbox layout that allows the air filter to be serviced from the side rather than forcing the rider to remove the seat to do it.

At the end of our short test day, we couldn’t help but be impressed with the 2018 Gas Gas EC 300 and XC 300. The redesigned models deliver all of the great attributes of previous models with greatly improved chassis and none of the suspension issues thanks to the KYB components. We’d love to pit both against competitive models in their class. We expect both to be in the hunt for top honors in their respective categories.