There are other bikes in the 250cc four-stroke motocross class that are much more deserving of that moniker, and the 2017 KX250F’s racing record is worthy of envy. In the hands of Monster Energy/Pro Circuit/Kawasaki riders Adam Cianciarulo, Josh Hill and Joey Savatgy, the KX250F in factory racing trim racked up an enviable record of seven race wins in supercross, and Hill scored the 2017 Monster Energy AMA West Superross Series Championship. In AMSOIL Arenacross, Gavin Faith scored his second consecutive National Championship as well.

But maybe these victories only underscore an issue that we found when testing the 2017 Kawasaki KX250F: Supercross and arenacross both place a lot of emphasis on snappy midrange power, and the 2017 KX250F delivers it in spades. Where it falls short, however, is off the bottom and up top in the rev range. The Kawi makes decent grunt in the middle but just seems to run out of breath quickly if you try to rev it.

No more, says Kawasaki, which has revised the 2018 KX250F to give it more torque and a more robust top-end performance—both welcome changes. Kawasaki has also updated the KX250F’s already excellent Showa suspension to give the rider even more control over rough ground. To prove it, Kawasaki invited us to the long and sandy Cahuilla Creek MX track in Anza, California, yesterday, so that we could sample the updated KX250F and see for ourselves. So while some our staff headed north to Adelanto to sample the 2018 Honda CRF450R, we sent DirtBikes.com test rider Nic Garvin south to give the Kawi a workout. Our thanks also go out to acclaimed moto photographer Drew Ruiz for snapping some great shots of the KX250F with Garvin aboard.

So, did Kawasaki achieve its goal of breathing new fire into the KX250F? The company engineers definitely worked hard in that direction, making changes to give the KX’s single-cylinder, DOHC, water-cooled, fuel-injected, 249cc engine more torque and increased power without reinventing the wheel, so to speak. The KX’s bore and stroke are the same as before, 77.0 x 53.6mm, but Kawasaki altered the compression ratio by lowering it from 13.7:1 to 13.4:1 to—less compression makes it easier for an engine to rev higher. Kawasaki also worked from the outside in, starting with the KX’s Keihin fuel-injection system. A new, higher-flow intake boot is fitted, and a new 43mm throttle body places the dual injectors a straighter shot at the intake tract by rotating them down to a 30-degree angle instead of the 45-degree angle of the previous model. Additionally, Kawasaki added a new fuel pump that is claimed to increase fuel pressure by 17 percent.

The intake tract has also been revised to be less restrictive, starting with a 20mm shorter intake funnel that leads into a new cylinder head design with a smaller divider in the intake ports. To gain a little more grunt, Kawasaki also added a new intake cam with advanced timing to help the KX breathe better. The ECU has also been revised to help improve top-end power while keeping the overall power delivery smooth. On the exhaust side, Kawasaki engineers added a 3mm wider and 30mm longer headpipe to improve the overrev while also increasing low-end grunt.

The net effect of these changes is a KX250F engine that still delivers a strong midrange burst, says Garvin, but it also feels a lot healthier on top by also offering decent overrev.

“The power doesn’t fall off as much as the 2017 model,” Garvin said. “It actually pulls more, and you can hold it in the same gear a lot longer. Still, it doesn’t feel as powerful as some of the other bikes in the class down low. One thing I noticed is that while you can keep it in the same gear longer, you still have to downshift it before you enter a corner. The motor still doesn’t make enough torque off the bottom to allow you to simply slap the clutch and keep going to conserve momentum. It’s like they shifted the power up in the rev range without making more power. If it were mine, I would put another tooth on the rear sprocket. That would help it a lot. Sometimes it felt like I needed to be in-between the ratios in the KX’s five-speed transmission.”

Garvin also noted his impression of when the Kawi performed best on the top end came when the white (lean) DFI coupler was plugged into the KX250F’s wiring harness.

“When you’re using the green (stock) coupler, you still have to shift the 2018 KX a lot, just like the 2017,” Garvin said. “It still flattens out, just not as dramatically as the 2017 did. Overall, it is better, and Kawasaki has gotten the KX250F closer to the top bikes in the class in terms of engine performance, but they’re not there yet.”

When every pony already counts, getting it to the ground is just as important, and Kawasaki has made some changes to the 2018 KX250F’s 48mm Showa SFF fork and Uni-Trak suspension in order to help it absorb smaller bumps and also improve its performance on corner entry. The SFF, which places the spring in one leg and the damping cartridge in the other leg, already features a 40-way spring preload adjuster along with the 22-position compression and 20-position rebound damping adjusters, and the 2018 version also replaces the 2017’s 9.8 Newton/mm spring with a softer, 9.4 Newton/mm spring. The valving has also been changed via a switch to new compression, rebound shims intended to make the fork more compliant over low-speed bumps while new BCV shims are used for better resistance to high-speed bumps.

Out back, the KX250F’s fully adjustable shock receives new compression and rebound shims along with a new plug-bolt (adjuster) setting to bring the rear suspension into balance with the front. Suspension travel at both ends is 12.2 inches.

Once up to speed at Cahuilla Creek, Garvin noticed that the SFF fork was blowing through its mid-stroke travel too easily.

“So basically we added two clicks of compression and took out some rebound, and that made the bike stand up better in the bumps and just feel smoother overall,” Garvin said. “Out back, the shock was basically sitting down too far, and it would wiggle in the bumps, so we added two turns of compression and went in on the rebound two turns. That got the bike balanced nicely. After that, I didn’t have any real complaints. The KX has pretty good suspension whether you’re dealing with small bumps or big hits like when landing off of a jump.”

Where the KX250F really shines, says Garvin, is in the handling department. Its aluminum perimeter chassis is as good as they come on a motocross track.

“The chassis is superb, by far one of the best out there and the best feature of the KX250F,” Garvin said. “You can steer it with the front or steer it with the rear. I had 100 percent confidence in it. I could put it anywhere I want to. The chassis flex reminds me of a trailbike, but no way is that a knock against it at all! It’s actually super-forgiving, yet it’s motocross-responsive. You have to put a little effort into steering it, but it turns so well. I got just a little wiggle in the bike when I was going really fast in a straight line, but I think that can be cured with a little more time dialing in the suspension. It didn’t really bother me all that much.”

Ergonomics are also important, and the KX250F’s layout is designed to suit a wide range of rider shapes and sizes thanks to its ERGO-FIT system, which allows the rider to move the handlebars and footpegs to suit his or her taste.

“One thing I really like about the ergonomics is that its ergos are so adjustable,” Garvin said. “You can place the handlebars in one of four places. I went with the back/back setting with the bars in the middle. Another thing that’s cool is that you can move the pegs in two positions on the chassis, which a lot of bikes don’t offer. There is a high setting and a low setting. I went with the high setting, which gave me more grip on the frame. The new seat is also better because it allows you to sit more level on the bike. My only gripe is that I really am not a fan of the stock grips. They feel like a rough plastic, and they beat my hands up pretty good.” 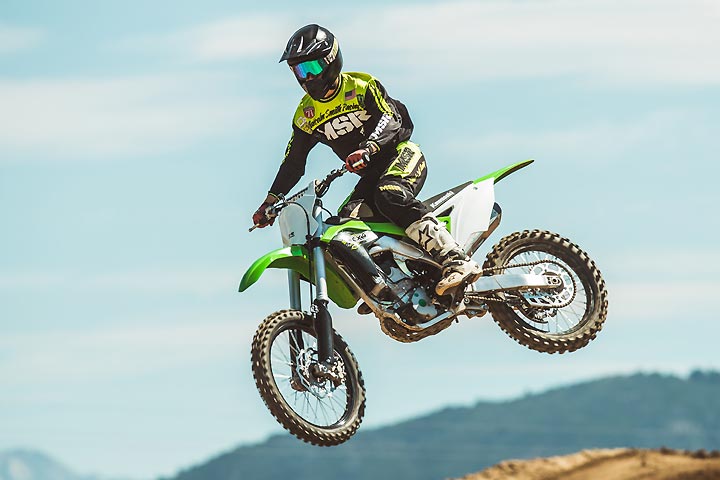 One other issue Garvin raised has to do with the KX250F’s massive 270mm wave rotor front disc and Nissin two-piston caliper.

“I was surprised that such a big front brake feels on the weak side,” Garvin said. “I felt like I had to really clamp it to get decent stops, which forced me to rely on the rear brake a lot more than I normally would. It might be a pad issue or a piston issue, but it feels like there is a little delay from the time that you pull the lever to when you actually feel the front brake slowing the bike. So, you have to be more aggressive with the lever, but it isn’t like that will cause the front end to lock up or anything sketchy like that. The front brake could be more powerful, for sure. The rear brake offers good stopping power and good modulation, though.”

One other detail that Garvin noticed was that the KX’s stock exhaust system isn’t very loud.

“That’s good because it doesn’t destroy your eardrums, but I would definitely put an aftermarket exhaust on it if I owned a KX250F,” he added.

At the end of the day, the 2018 Kawasaki KX250F represents an improvement over the 2017, although not as drastically as we had hoped. It may ultimately take an engine redesign to get the KX in the horsepower hunt with some its Japanese and European rivals, but in the meantime the 2018 version with improved performance, better suspension and that awesome-handling chassis can be had for just $7749, exactly the same price as the 2017 model.

That makes the 2018 KX250F a better bargain as well as a better Kawasaki.