KTM’s Factory Edition line of motocross bikes has been giving customers the unique opportunity to purchase a bona fide factory motocross bike since 2012, and today the company unveiled its latest generation, the 2018 KTM 450 SX-F Factory Edition at its brand new supercross test track located right behind the company’s U.S. headquarters in Murrieta, California.

“As a company, our brand promises ‘ready to race,’” Hinz said. “This isn’t just something that we talk about or a logo that we put on the wall on a banner. This is something we do every single day. We actually live it. This is who we are. We put our heart and soul into this motorcycle. It’s what we do. We want to give the best equipment to our riders, to our athletes, to our teams to go out and be successful and win championships.” 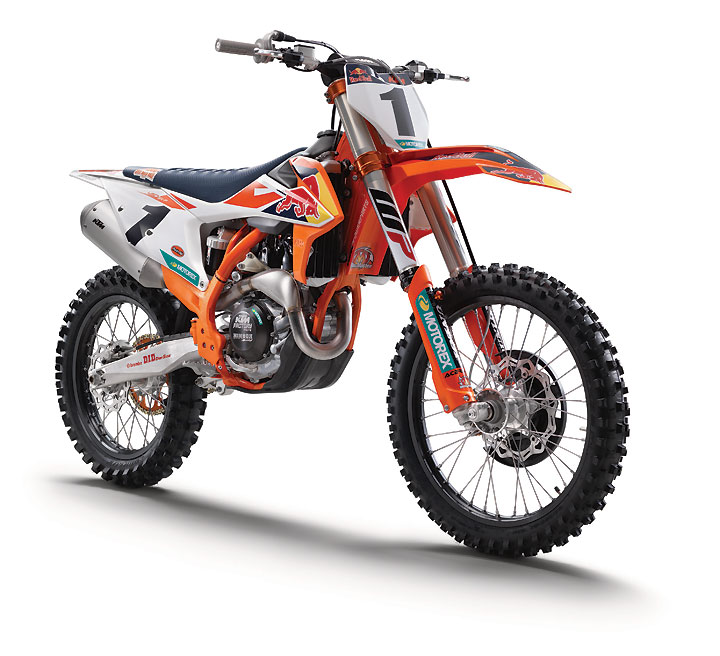 Each KTM 450 SX-F Factory Edition bears the fruit of an extra-long development cycle. Whereas the production machines are introduced each June, the Factory Editions aren’t unveiled until December, affording KTM’s R&D and test teams every opportunity to further refine and develop them before they are released just prior to the start of the AMA Supercross season.

“We’ve redefined the development cycle of this product just for racing,” Hinz said.

“We introduced our first generation KTM Factory Edition in 2011, and this was a huge step for our company,” Moen said. “We had a new chassis and handling, and a new single cam engine, and they brought the weight down. We worked hard the next couple years to refine that, and in 2015 we came out with the next-generation of the 450 Factory Edition, and it was a huge improvement, and it won three [AMA] supercross championships. We put into a lot of effort into the design and testing of the chassis, and we learned a lot about the frame. We also redesigned the motor and lost four pounds out of that motor, which was huge. They looked at every component of the motorcycle to bring the weight down even more. On this latest generation, we had a lot of goals, and one of them was the chassis and handling.” 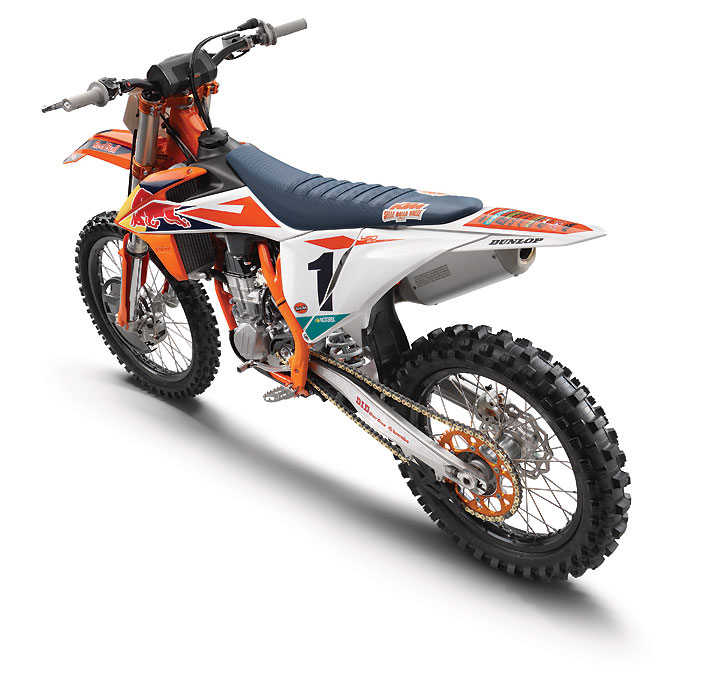 Moen said that the 2018 KTM 450 SX-F Factory Edition boasts a lot of refinement over the 2017 KTM 450SX-F Factory Edition to improve the handling even more. The key goals were to optimize the chassis stiffness while also making the motorcycle more comfortable to ride.

“Those are two words that any guy who works on suspensions and chassis knows do not go together,” Moen said. “On the previous generation, the chassis absorbed bumps really well, but we wanted it to be even more precise and more stable.”

To get there, KTM engineers redesigned the front portion of the Factory Edition frame from the steering head area of the frame down to the lower downtubes below the engine. The 2018 chassis is claimed to be 7-10% stiffer longitudinally in those areas because testing also revealed that the chassis loads can vary greatly during suspension compression. Stiffening the front helps to keep the chassis more torsionally rigid without sacrificing the great feel of the previous-generation chassis. To enhance that front triangle stiffness, the 2018 KTM 450 SX-F Factory Edition also receives a stiffer aluminum triple clamp. The clamp offset is 22 millimeters. Out back, a 40 millimeter longer aluminum subframe adds to the chassis stiffness. While they were at it, KTM engineers also lowered the radiator positioning on the frame by 12 millimeters and stiffened the T section at the top of the radiators as well as changing both the upper and lower radiator tanks, which helps improve cooling while also moving the radiators closer to the frame.

“The result is that the motorcycle is more stable, but it’s also more comfortable to ride,” Moen said.

KTM didn’t leave the 449.cc SOHC four-stroke engine in the 2018 450 SX-F Factory Edition alone. The engine shaves another pound off the package while also being shorter for better mass centralization.

“On the motor, we actually lowered the cylinder head by 15mm, the cam is also 15mm lower, but the ports are still up, so we actually have a more direct intake port into the combustion chamber,” Moen said. “One design that we’ve always had is a single [upper] downtube that splits into a Y so we could have a straight exhaust port, but now it’s even straighter. This is kind of free horsepower that we’ve always had available.”

To capitalize on head and exhaust port changes, the 2018 KTM 450 SX-F Factory Edition also receives a new exhaust system with a headpipe that exits the exhaust port in a much straighter fashion than the previous version, a new midpipe that hides the resonance chamber inside the pipe, and a much shorter muffler. The headpipe joint has also been repositioned to make it easy to remove the header without having to remove the shock absorber.

“The cam features the same intake and exhaust profiles, but the intake lobe on the cam is advanced two degrees,” Moen said. “We also worked a lot on [reducing] the friction on the cam and cam chain guides. We learned a lot about just what drags motor down and how much you can free it up. The whole goal with the motor was to make a lighter-feeling motorcycle without making power [that is] unrideable. We wanted to keep the torque characteristics, everything that we had, the same. We wanted to keep the motorcycle powerful, which we’ve always been able to do.”

To reduce drag inside the engine, the cam also gets a new, slicker surface treatment and rides on low-friction DLC rocker arms that bump open the Factory Edition’s titanium intake and exhaust valves.

Other refinements to the 2018 KTM 450SX-F Factory Edition include new bodywork, including the gas tank, radiator shrouds and other bodywork.

“KTM has been working for the last three years, listening to all of our [KTM North America] requests and all of the riders’ requests,” Moen said. “We wanted to make every place that the rider touches, all of the contact points [feel] better, so that when you stand or you sit down you’re always in the perfect position. Any time you have more confidence, and it [the bike] is easier to ride, riders go faster.”

Another change is the incorporation of 5 millimeter longer rear wheel axle slots to give the 2018 KTM 450 SX-F Factory Edition even more wheelbase adjustability. The Factory Edition also receives skid plate mounts on the chassis.

The chassis changes required alterations to the shock settings of the 450 SX-F Factory Edition. In addition to valving changes, the Factory Edition’s fully adjustable WP DCC shock also gets a new piston. 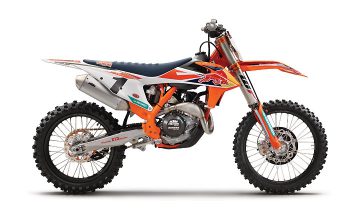 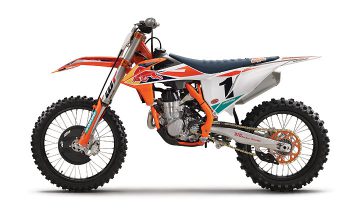 KTM has not yet set an MSRP for the 2018 KTM 450 SX-F Factory Edition, but it said that it plans to announce pricing in the next two or three days. For more information on the machine, visit KTM.com.