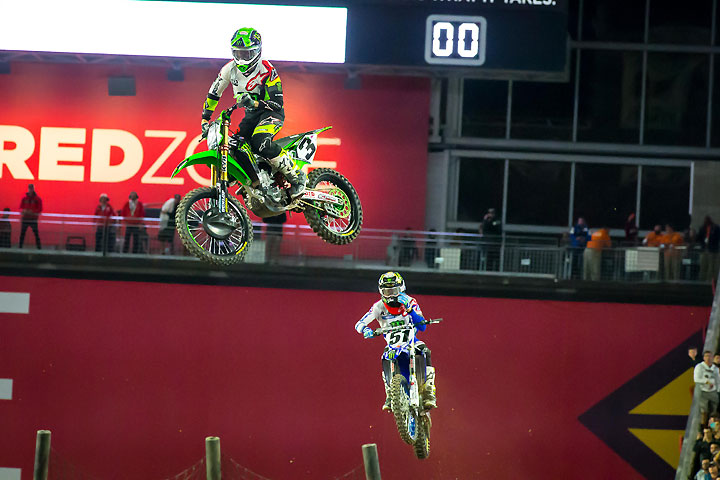 Before a crowd of 54,000+ fans, Tomac led all 23 laps of the 450cc main event to earn his 15th career Monster Energy Supercross win in the premier class hot on the heels of his win at the 2018 Anaheim II Supercross. It also moved him to 15th place on the all-time AMA Supercross winner’s list, just one victory behind former series champion Jean-Michel Bayle.

“That was a big, big push,” Tomac said afterward. “The pressure behind me was there the entire time; you couldn’t miss a line. I nailed everything… That was just awesome. We put in a big effort all day and to go out on top was the best.”

In the 2018 Phoenix Supercross 250cc SX West main event, Aaron Plessinger passed his two main title rivals to not only land his second win of 2018 but also take over the class points lead.

450
Tomac didn’t start off the night with a win at the 2018 Phoenix Supercross—he finished third behind Rockstar Energy Husqvarna’s Jason Anderson and Team Honda HRC’s Ken Roczen in the first 450cc heat race—but he had the hot clutch hand when it mattered, moving to the front as the field raced up the start straightaway, cutting to the inside, briefly slipping to third, but then using the shortest distance around the opening left-hand corner to easily claim the holeshot ahead of Monster Energy Knich Yamaha’s Justin Barcia, JGR Autotrader Yoshimura Suzuki’s Weston Peick and Anderson. Behind them, Roczen and Red Bull KTM’s Marvin Musquin were also off to good starts, placing most of the top combatants in the series within close quarters.

Peick would move into second place, ahead of Barcia, Anderson and Roczen early in the race, the Suzuki rider once again impressing by putting himself in a good position to start the main. However, Barcia wasted little time in getting back to second place by moving under Peick in a left-hand corner at the end of a whoop section.

It appeared as though the table was set for Anderson, who was running comfortably in fourth, to be the next man past Peick, but Roczen spoiled that by pouncing on Anderson for fourth place just past the finish line. After that, Anderson, who came into the 2018 Phoenix Supercross with the series points lead, began to ride erratically, and he dropped off the lead pace. Anderson would slip all the way back to eighth place in the middle stages of the race, jeopardizing a streak that includes seven consecutive 450cc supercross podium finishes.

With Tomac already 5.3 seconds ahead of Barcia, Peick continued to hold off Roczen for third place, and the two began to trade the third spot, which allowed Musquin to draw close to Roczen until Roczen executed a flawless pass on Peick over the finish line jump and into the left-hander at the start of lap seven. Musquin had a much harder time with the stubborn Peick. The KTM man wouldn’t be able to find a way past the Suzuki man until lap 11.

However, the Peick/Musquin battle also allowed Anderson to regroup and shadow Monster Energy Kawasaki’s Josh Grant into what became a four-rider battle for fourth place. Anderson somehow regained his rhythm late in the main, and he passed his way back through all of them to salvage the spot. Anderson was able to cement it when he took away Musquin’s line over a triple jump on lap 18.

Up front, Tomac continued to cruise, and while Barcia and Peick would eat into his advantage toward the end of the 2018 Phoenix Supercross main event, there was no stopping Tomac.

“It was a great night,” Barcia said. “I had a lot of fun tonight. I wasn’t the fastest in practice, but the whole team did a great job. It was a difficult track. It was very challenging, slick, there were some big rhythms and I missed them a few times… Eli rode a great race. Kenny was pushing me from behind. I was trying to catch Eli. It was challenging for sure. I’m just so happy to be here. This is a good situation to be in. I’m in the championship fight, were I always wanted to be.”

Roczen appeared to be satisfied with his third-place finish at the 2018 Phoenix Supercross.

“I felt pretty comfortable everywhere,” Roczen said. “I was hitting the whoops really good. I was super smooth. The track was really difficult tonight, so you really had to hit your marks. It was super technical. I’m kind of bummed about my start. I’m not happy with it. I’m just too far back, and had to make a couple passes happen, and then the front guys were gapping me a little bit. But towards the end we reeled Eli in a little bit. I got a couple close calls in the finish in the sand right here, if you didn’t time it just right. That cost me big time because I was really close to Justin, but I try to do what I can. Overall, though, I love how the team and I worked tonight. The track was super good. It was difficult. So that really made a big difference here tonight. I loved it.”

While Anderson’s podium streak came to an end, his fourth-place finish allowed him to retain the lead over Barcia in the 2018 Monster Energy AMA Supercross Series points standings with the 2018 Phoenix Supercross in the books. He leads Barcia by nine, 89-80, while Roczen has remained consistent but not yet posted a win, leaving the German rider third with 77 points. Owing to their missed starts in the series, Musquin and Tomac are still ninth and 10th respectively, in the standings as the series heads to Oakland, California, for round five.

250SX West
Monster Energy Pro Circuit Kawasaki’s Joey Savatgy got off to a great start in the 2018 Phoenix Supercross 250SX West main event by sweeping across the field from the outside to grab the holeshot ahead of Troy Lee Designs Red Bull KTM’s Shane McElrath, with Plessinger third ahead of his Monster Energy Yamalube Yamaha teammate, Mitchell Oldenburg. Savatgy’s lead very nearly came undone, though, after his front wheel clipped the top of a landing in the rhythm section. McElrath, who came into the night tied with Savatgy for the class points lead–68 points each–was unable to capitalize, however, and Savatgy led the first lap. The front three quickly began to pull away from Oldenburg and 51FIFTY Energy Drink Yamaha’s Kyle Chisholm, the latter passed by Monster Energy Pro Circuit Kawasaki’s Adam Cianciarulo for fifth place. Cianciarulo would pass Chisholm for fourth place by lap six.

But the order began to shuffle up front as early as lap two, when McElrath found the drive to through a whoop section and was able to pass Savatgy in the next left-hand corner. That left Plessinger chewing on Savatgy’s rear fender, and Plessinger leaped to Savatgy’s inside at the end of a rhythm section and took over second place on lap three. Plessinger kept the pressure on and cut into McElrath’s lead. Plessinger took a shot at McElrath on lap five, but McElrath was able to defend the attack.

Plessinger didn’t wait much longer, however, and he was able to triple a a rhythm section to gain an advantge on McElrath, who double into the same section. Plessinger sealed the deal in the next right-hand corner to take the lead. McElrath tried to take the spot right back, but his KTM hopped sideways over a jump, and he lost just enough time while trying to save it to allow Plessinger to escape.

Plessinger was able to move out to a comfortable lead after that, adding tenths of a second to his advantage to cross the finish line for his second win of the season. Plessinger was just under 3.8 seconds ahead of McElrath at the checkered flag. Savatgy came home fourth, with GEICO Honda rookie Chase Sexton putting in another strong ride to finish fifth.

“I got off to a great start,” Plessinger said. “That’s a little unusual for me, but we’ve got ’em down. The team and I went to work this week, and we practiced starts all week, and as you can see, it’s paying off. When I passed Shane, he said I cut over on him. I apologize, but, you know, I want to win. We all want to win, and there’s only one way we can do that. Me and him had an awesome race.”

If McElrath was sour about how Plessinger passed him, he didn’t let it show on the 2018 Phoenix Supercross podium.

“I was going as fast as I could,” McElrath said. “The track was really slippery, and the lappers, they seemed to be a little worse tonight. But the track is fast, and we’re learning. Aaron was just going really fast, and he was pulling me just a little bit each lap. I couldn’t do nothing with it, so hat’s off to him. He rode awesome. It’s fun battling with these guys. This what we do, and I know the fans love it. We can hear them when we’re out there, riding. We’re learning, we’re praying, and God’s faithful. So we’re moving on and looking forward to Oakland.”

Meanwhile, Cianciarulo whittled away at Savatgy’s advantage as the two battled for third place late in the race. However, it appeared that Savatgy would have the pace to keep the spot until a sudden mistake on lap 14 saw him push the front end and go over the handlebars in a right-hand corner, allowing Cianciarulo to inherit third place. Savatgy remounted in fourth place but didn’t have enough time to catch Cianciarulo, who landed another podium finish, 7.7 seconds behind Plessinger, after finishing fourth at 2018 Anaheim II Supercross last weekend.

“I feel really good to start the season, really,” Cianciarulo said. “I feel better than I ever have. It’s disappointing on my part to not execute starts like that. It’s cliche. As riders we say it all the time, but there’s no excuse. My bike is great. My coaching is great. It just comes down to me executing on the gate, and I own that. It’s completely my fault. Until I decide to fix that I’m just stuck in this spot. I mean, you can’t just expect to start 10th and then run these guys down. They’re world-class athletes. So, I need to fix that, but, overall, [I’m] grateful to be up on the podium, to be safe and to move onto next weekend.”

As it stands, just five points now separate the top three riders in the class standings after the 2018 Phoenix Supercross. Plessinger’s win moved him one point ahead of McElrath at the top of the list, 92-91 while Savatgy slipped out of his share of the series lead and his now third as the series heads to Oakland Alameda City Coliseum on February 3 for round five of the Monster Energy AMA Supercross Series. 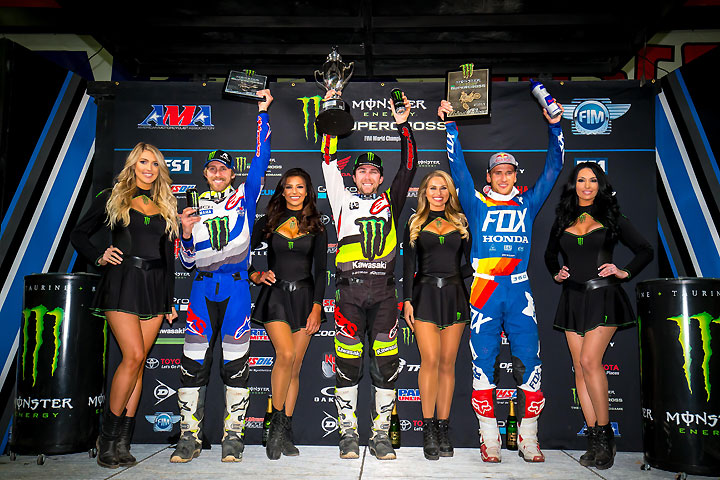