Suzuki clearly put in a lot of effort to raise the competitive level of its 2018 Suzuki RM-Z450, and it shows.

After finishing near the bottom in our 2017 450cc Motocross Shootout, the Suzuki moved up a position this year, finishing in fourth place in our 2018 450cc Motocross Shootout. That may not sound significant, but when our score card tally was complete, the 2018 RM-Z450 missed the podium by a scant few points, and it was unanimously praised by our test crew. If there were a category for most-improved 450cc motocross bike in our testing criteria, the Suzuki would have battled the class-winning 2018 Yamaha YZ450F to the wire for that honor.

So how did Suzuki do it with a machine that wasn’t all-new from the ground up? Pretty simple, really. Despite flawed suspension and an extremely rigid-feeling chassis, the 2017 model was a well-liked 450, and few would argue that Suzuki already produces one of the best-cornering 450cc motocrossers in the class. If Suzuki could update the suspension and make the 2018 Suzuki RM-Z450 more comfortable to ride, there was little doubt that it would probably be a better bike. 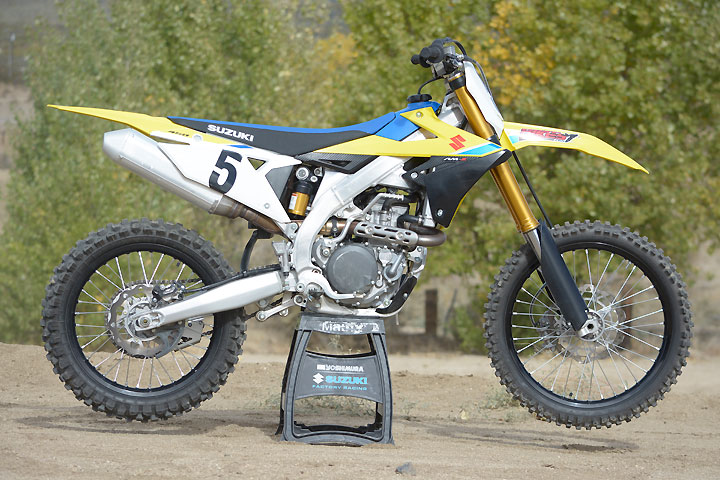 The most significant changes to the 2018 RM-Z450 are in the chassis and suspension, right where they needed to be, but the RM-Z’s engine also received updates. Suzuki calls it “The Winning Balance,” developing the RM-Z450 to run, turn and stop better.

To get the 2018 Suzuki RM-Z450 to run better, Suzuki engineers took a good look at the 2017 RM-Z’s 449cc, liquid-cooled, fuel-injected DOHC engine. To pull more power out of the existing design, the cylinder head intake port was revised for a 25% increase in tumble flow. What is tumble flow? Basically, it is the flow that rotates near the outer edges of the intake charge. Increased tumble flow increases the turbulence of the intake charge, which leads to more efficient combustion, hence more power.

The 2018 Suzuki RM-Z450 also receives a revised fuel-injection system in which the 44mm Mikuni throttle body features an inverted injector. Using a process that Suzuki has successfully utilized on its GSX-R superbikes, the inverted injector deflects the fuel shot off the throttle body butterfly to assist fuel atomization for better throttle response. The revised fuel-injection also features a new, high-pressure fuel pump in order to better match the intake air flow, which has also been improved via a larger air box intake boot.

There aren’t many changes to the RM-Z450’s rotating group, but the changes are noteworthy. Suzuki engineers revised the radical intake camshaft profile to lift the RM-Z’s intake valves further off their seats and fitted a stronger, F1-style bridged box piston to increase durability.

While the 2018 Suzuki RM-Z450 does not receive an electric starting system such as the one found on its off-road sister, the Suzuki RMX450Z, it doesn’t really need it. The RM-Z450 can easily be fired up with just a light boot on its kick start lever, and once you get onto the track, the 2018 model’s improved power character is obvious. The revised engine’s throttle response is really strong, and the RM-Z’s bottom-end grunt is healthy. It quickly transitions into a robust mid-range, and where the 2017 engine tended to sign off early, the 2018 continues to pull with authority on top. It never really flattens out, which allows the rider to stay in each of the RM-Z’s smooth-shifting five-speed transmission longer and fan its light-feeling cable-actuated clutch a lot less than the 2017. At the same time, however, The RM-Z450 retains the 2017’s tractable, controllable character, affording the rider plenty of exciting power without making the bike tiring to ride. It’s a more flexible engine, to be sure.

The 2018 Suzuki RM-Z450 churned out 51 rwhp on tap @ 8400 rpm and 33.1 lb.-ft. of torque @ 7900 rpm on Mickey Cohen Motorsports’ Dynojet dyno. The Suzuki makes the least peak horsepower in the class, although few people would argue that the RM-Z needs to make more peak power anyway. Part of the reason is that the RM-Z450 delivers a broad torque curve that makes it feel plenty fast and easy to ride. For that reason, the 2018 RM-Z450 would make a great choice for someone transitioning to a 450 from a 250cc four-stroke.

Part of the 2018 RM-Z450’s improved tractability can be attributed to its new ECM, which is claimed by Suzuki to process data 1.6 times quicker than the previous ECM. The new ECM also sports what Suzuki calls an “Evolved Traction Management System.” The ECM senses throttle position, engine speed and transmission load to optimize fueling and ignition timing for a given riding condition. The ECM also features the latest version of the Suzuki Holeshot Assist Control, which offers two modes. Similar to the system on the Honda CRF450R, the A mode and B mode positions can be recognized by the cadence of the flashing light on the RM-Z450’s handlebar-mounted switch. A mode retards the ignition to help the rider get off the gate and is also useful on slick track surface. B mode advances the ignition timing for a more robust power feel in high-traction riding conditions.

Power wasn’t our biggest gripe with the 2017 RM-Z450. Our biggest issues were in the chassis and suspension, which imparted a stiff ride compared to other bikes in the class. Suzuki engineers clearly put a lot of effort into rectifying that by designing an all-new, twin-spar aluminum chassis that is smaller, lighter and shorter than the 2017 model. The 2018 RM-Z450 boasts a slimmer chassis that is also 1.32 lbs. lighter than the 2017, and its flex characteristics have been altered to deliver a more compliant ride. The 2018 RM-Z450 also receives a new swingarm and a new aluminum subframe, the latter made of hexagonal tubing to make it more rigid. Wheelbase has been shortened from 58.9 inches to 58.3 inches.

You definitely feel the 2018 RM-Z 450’s poundage when hoisting the bike onto a stand, but that girth seems to vanish into thin air on the track. The Suzuki’s steering geometry, which checks in at 27.8 degrees of rake and 4.7 inches of trail, is spot-on, delivering the same light steering effort and razor-precise cornering manners of its predecessor. Even better, the 2018 chassis’ compliance over rough terrain is vastly improved. The 2018 RM-Z450 tracks straight and true at all speeds without delivering a lot of harsh feedback to the rider—although some of our testers think Suzuki still didn’t go far enough. This improved handling and chassis feel only increases the rider’s confidence and allows him or her to attack rough track sections, dive into corners and make mid-corner line changes with greater ease. The Suzuki is also extremely neutral and easy to maneuver in the air.

Of course, Suzuki’s 2018 suspension upgrades have a lot to do with the RM-Z’s straight-line stability, and the RM-Z450 features new components front and rear. Up front, Suzuki ditched the Showa TAC air fork and got back to good old-fashioned coil springs, fitting a 49mm Showa twin chamber coil spring fork that features large inner cartridges and cartridge rods. The inner cartridge piston size is 25mm and the cartridge rod is 14mm. The sub tank piston measures 39mm. Each fork leg is fitted with 5.0N/mm springs.

Out back, the RM-Z’s linkage rear suspension is connected to a Showa Balance Free Rear Cushion (BFRC) shock, a first for a production dirtbike. The BFRC shock utilizes lower internal pressures than most piggyback reservoir shocks, which decreases friction and heat as the shock cycles through its stroke.  The BFRC is “balanced” via a double tube design that flows oil in both directions. The piston rides in the inner tube and pumps the oil through a compression valve and a separate rebound valve in the shock body. As the shock moves through its stroke, oil is then routed through the outer tube to the underside of the piston to equalize pressure.

There’s no question that the 49mm Showa coil spring fork on the 2018 RM-Z450 represents a vast improvement over the 2017’s Showa TAC fork. The “springer” fork is very supple in small chatter bumps, and yet it soaks up the big stuff without transmitting harsh feedback to the rider. Out back, the BFRC shock’s action balances well with the front as long as you take care to set it up. Our testers had to fiddle with the settings on the shock, which features separate external damping circuits intended to improve sensitivity and response, to tame what was deemed to be excessive kickback over some square-edged bumps. Even so, the BFRC represents a huge improvement in performance over the 2017 shock, helping the 2018 RM-Z450 to track straighter and accelerate harder off of corners.

Most of our testers liked the ergonomics of the 2017 Suzuki RM-Z450, and the 2018 Suzuki RM-Z450 feels even better. Its slimmer, smaller feel and narrower seat definitely help to hide its 250.3-lb. weight on the track. For added comfort and increased steering leverage, Suzuki engineers also moved the handlebar clamps 7mm forward on the triple clamp. All-new bodywork also gives the RM-Z450 a much sleeker appearance than the ’17, and Suzuki engineers also did away with the RM-Z’s aluminum fuel tank, replacing it with a resin tank that holds more fuel—1.6 gallons to be exact. The new fuel tank shaves .6 lbs. (empty) over the aluminum tank.

The word “thin” kept coming up when describing the RM-Z’s cockpit. Its seat, bars and pegs all feel as if they’re perfectly located, which helps the rider transition between seated and standing riding positions. Everything just falls into place, and when you don’t have to think about such things as a handlebar that’s too high or foot pegs that are positioned too far forward or aft, you can focus on the track ahead better. The 2018 Suzuki RM-Z450 affords a lot of focus.

Since most riders will be able to go a lot faster on the 2018 Suzuki RM-Z450, it’s also nice to know that Suzuki addressed the brakes on the new machine—not that we ever had man complaints with the previous model’s brakes despite its smallish 250mm front rotor. For 2018, a 270mm front rotor replaces the 250mm unit. The larger rotor is still clamped by a two-piston caliper, while the rear rotor remains at 240mm with a single-piston caliper.

While KTM and Husqvarna still dominate the braking category in the 450cc class, the RM-Z’s binders are clearly among the best of the Japanese bikes. The Suzuki’s brakes offer excellent stopping power with easy modulation—strong without being overly touchy. They do an excellent job of hauling the 2018 RM-Z450 down from high speeds.

We don’t yet know how the market will treat the 2018 Suzuki RM-Z450, although at we can say that its MSRP of $8849 makes it a relative bargain in the 450cc motocross class. It may not be our favorite 450, but that doesn’t mean it’s not competitive or boring to ride. In fact, it’s quite the opposite. Taken on its own merit, the 2018 RM-Z450 is a very good bike that exhibits strong power, great suspension, good brakes and that classic Suzuki RM-Z450 handling. 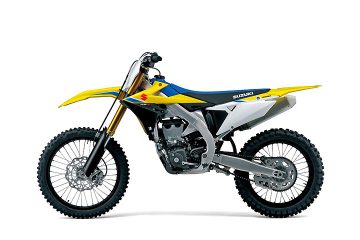