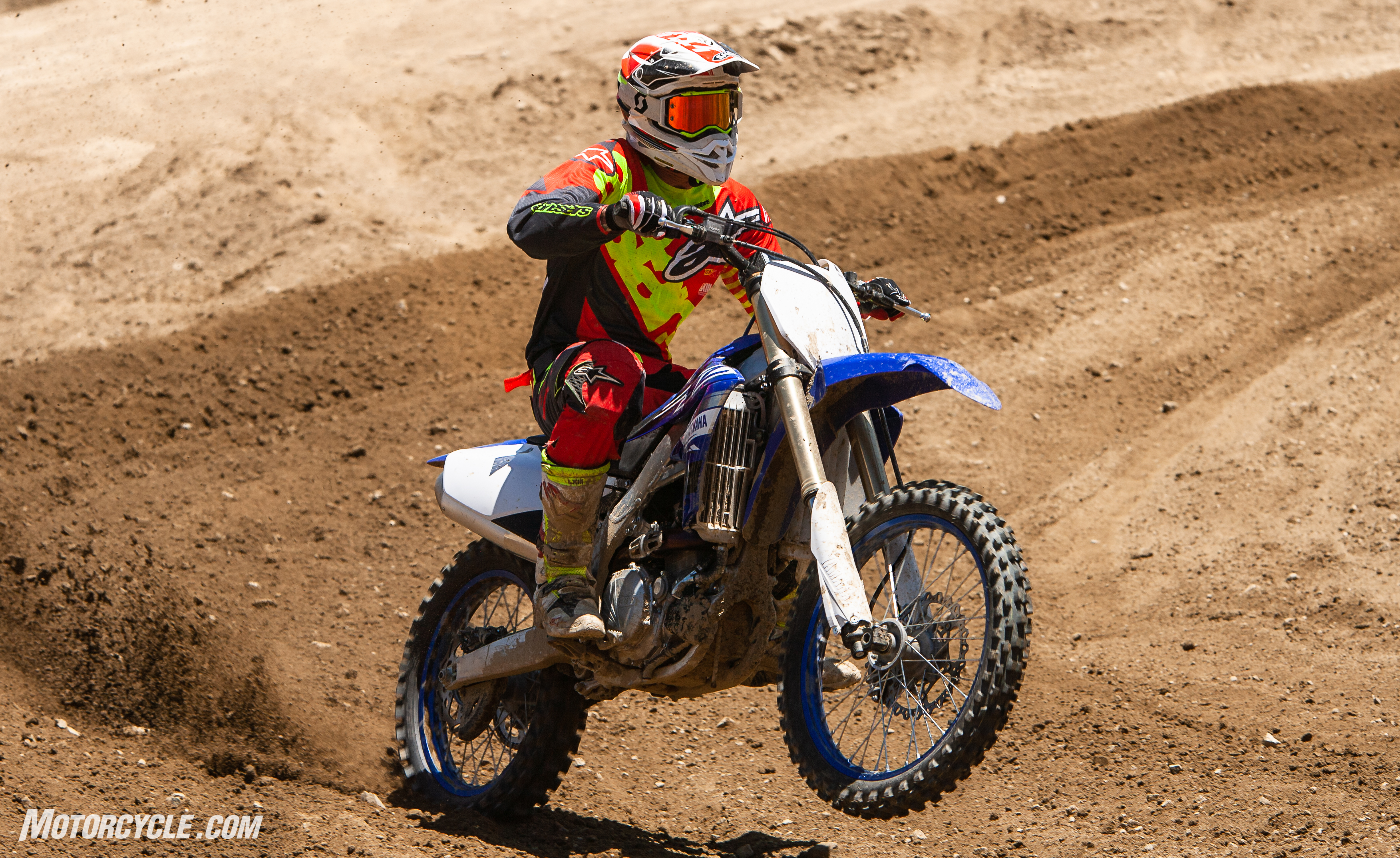 You know the age-old saying, “if it ain’t broke, don’t fix it?” Well, that pretty much sums up the 2019 YZ450F because Yamaha’s big dog motocrosser was all new and completely revised for 2018. Last year’s model was a favorite amongst many riders of different levels and abilities – including yours truly – for various reasons, and the 2019 brings back all of the 2018’s strengths. However, Yamaha’s testers and engineers polished a couple areas and made a few tweaks this year that may sound trivial on paper but provide significant improvements in the actual riding experience.

To understand what makes the 2019 so much better than the 2018, we have to talk a little about the ’18 first. The YZ450F has never been criticized in the motor/power department. It provides some of the broadest, most usable power available – almost too much sometimes – and the same motor is carried over this year. The only differences are an improved electric starter that reduces engine drag and horsepower loss (as if it needed any more) and a blue valve cover. The motor has a great bottom end which doesn’t mind being lugged, but it’s also super snappy and spins up quickly with great over rev.

On most tracks, I get around just fine by keeping 450s mostly in second and third gear, and occasionally fourth on tracks with longer straights or bigger booters that require a little extra speed to clear, but I found the YZ450F allowed me to really ring the motor out further than I’m used to. The 2018 model features a 48-tooth rear sprocket, which I loved for the added over-rev speed, but at times, for me, felt a smidge too tall in some corners, as if I was just on the cusp of being between gears. Of course, this was nothing a little clutching couldn’t fix, but I’m lazy when it comes to riding 450s. I prefer to use their raw power to carry me through a turn.

We got to ride both the ’18 and ’19 back-to-back at Glen Helen to get a feel for the differences between the two, and the 2019’s 49-tooth sprocket truly made a noticeable difference. The same corners where I would possibly bog a little bit or have to drop a gear on the ’18, I could power right through with zero hiccups or hesitations on the ’19. This meant I could carry more corner speed and that I didn’t have to shift as soon because I was more often in the meat of the powerband. That one tooth increase, as trivial as it may sound, had a huge effect on the bike’s overall engine character, especially on the bottom end, and it lost almost nothing on top – nothing a rider of my ability would suffer from, anyhow.

As improved as the bike felt with just a simple sprocket change, the biggest revisions to the 2019 YZ450F come in the suspension and handling department. Unlike other manufacturers, Yamaha has always stuck with the tried and true spring forks – no split air forks here – and the KYB SSS fork is great in offering plush action in the choppy stuff, nice control and progressive feel throughout its travel and impressive bottoming resistance under both slap-down and g-out impacts.

As nice and plush as the suspension felt, the 2018 YZ450F was often criticized to be sprung on the softer side, which for most riders was rarely a problem a little tuning couldn’t fix, but it was much more noticeable for the faster guys. It tended to dive under heavy braking and then would seesaw rearward when getting back on the gas. This made it somewhat difficult to get a settled, level and composed feeling through the turns, especially in deeper ruts that require precise balance and throttle control to navigate. Yamaha took this into heavy consideration for 2019 and improved the suspension, making it stiffer with increased compression damping both front and rear, allowing the bike to ride higher in its stroke. Jumping from the 2018 to the 2019, you could definitely feel a difference, especially once the pace picked up. The 2019 YZ450F almost made the ’18 feel softer, like a trail bike, in comparison.

Speaking of softness, another aspect some riders noticed about the 2018 YZ450F was its soft seat, and for 2019, Yamaha has increased its density by 16%. Climbing off the ’18 and onto the ’19, it was the first thing you’d notice. Again, 16% might not seem like a huge difference on paper, but it’s something your gluteus maximus feels instantly. I never had a problem with the ’18 seat being too soft as I try to stand as much as possible unless I’m really pouring the coal through a turn, and I also ride my MX bikes off-road for hours on end at a time, so the extra plushness isn’t always a bad thing when you’re in the saddle all day.

On the track though, the stiffer seat definitely makes the bike feel more nimble in the sense that you’re sitting more on top of the bike rather than in it. Some riders said they would bottom out and feel the seat base or frame rails in a heavily compressed corner or while seat bouncing, but it never really bothered me enough to consider it a detriment. The stiffer seat also allows you to move around and slide up on the bike more freely, and you can really get up on the tank to weigh the front tire for quick turns.

Further aiding the rider in making quicker, more planted feeling turns are the redesigned front fork lugs, axle brackets and wheel collars. They’re larger for 2019 and the increased surface area contact zone between them offers added rigidity which provides better tracking and feeling on initial lean in. These are the types of refinements that as seemingly insignificant as them may sound, make the biggest differences in handling. It’s tweaks like these that factory teams are after – little things that make the bike handle better. According to Yamaha, the 2019 Yamaha YZ450F makes between 54-55 hp in stock form, and the factory race bike that Justin Barcia rides makes between 58 to 60 hp depending on the track – any more and the bike becomes un-rideable. If 5 additional ponies over stock is too much for guys like Bam Bam, then 55 hp is more than plenty for us mortals.

In fact, the day we rode the 2019 YZ450F at Glen Helen, it was pro day and the track was cut deep – deeper than what I’m typically used to – and the crew at GH is on top of keeping the track watered, which means certain areas can get slick. The YZ450F comes with three preconfigured engine maps: Linear Torque for hard pack conditions, Smooth Linear for slippery and Hard Hitting for loamy. I started off in Linear Torque (basically the middle ground) and felt pretty good, but sometimes the throttle felt just a little too peppy from completely off to on – especially on this rough track. If I didn’t come into a corner smoothly enough, a small unintentional bump of the throttle would lurch the bike forward, momentarily throwing me off my rhythm. 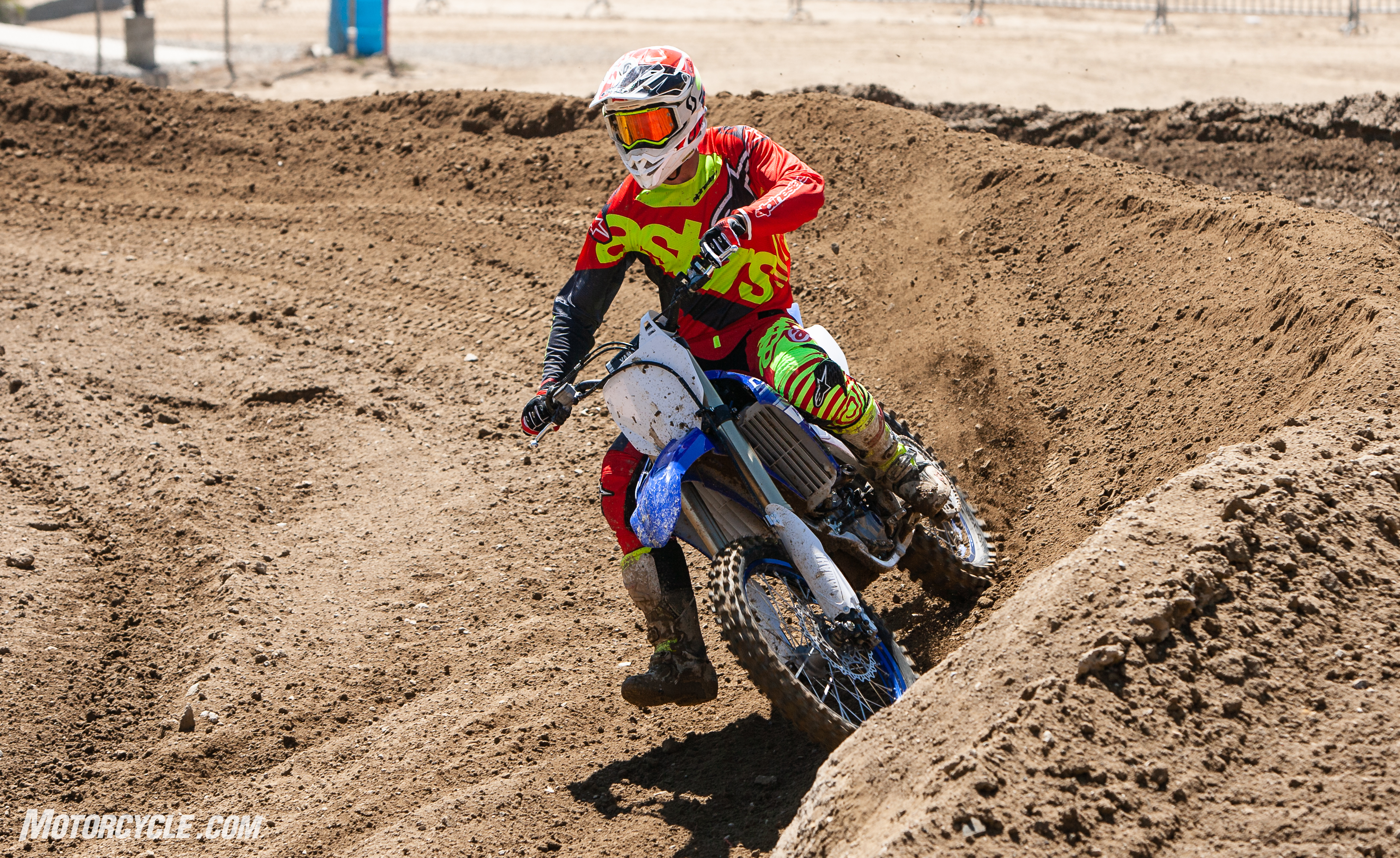 A quick trip back to the pits, and I could whip out my phone, open the Yamaha Power Tuner App and switch engine maps (which is free and available for both Apple and Android users). I bumped it down to the Smooth Linear map, where the initial hit off the bottom is subdued, and I was back on the track in minutes. No longer did I have any problems with a touchy twist grip over braking bumps into the chopped up corners. I felt more confident coming into them knowing I was able to get on the gas more smoothly without any herky-jerkiness. For shits and giggles I also tried the Hard Hitting map, and it’s just that. If I owned the 2019 YZ450F I don’t know if I’d ever use that map unless I was riding dunes in the desert. Like we mentioned earlier, the YZ450F has never been accused of being slow. 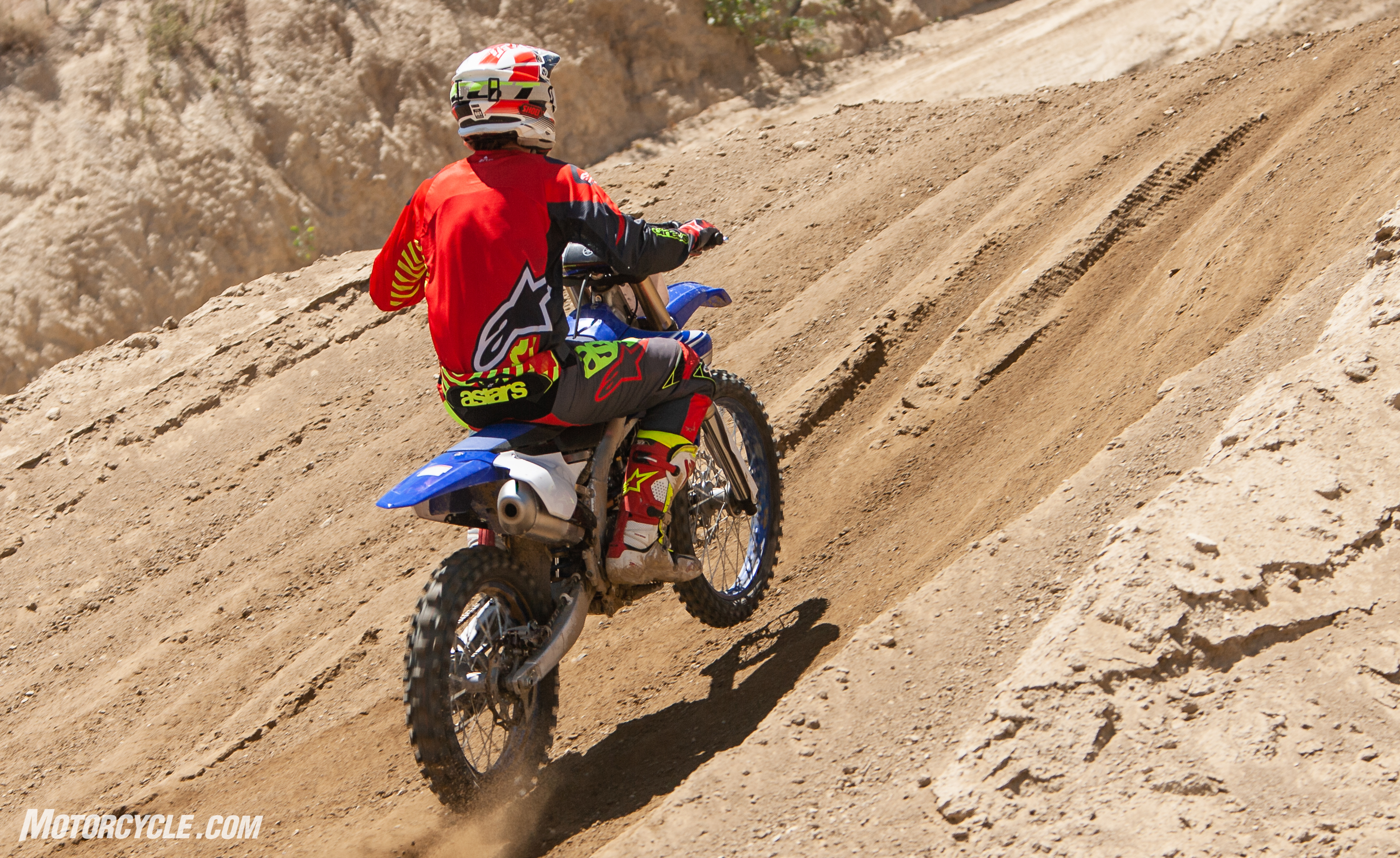 Using Wi-Fi to connect to the bike’s onboard CAN-bus network via a Communication Control Unit (CCU), the Yamaha Power Tuner App lets you do more than just select other maps. You can also custom tune your own by adjusting the air/fuel mixture and ignition timing maps to tweak engine performance for track conditions or even altitude – all within minutes, and it’s as simple as changing numbers in a mapping chart. The beauty of it, though, is that it’s educational for those with a little patience and desire to play around with it, and Yamaha has limited the parameters so that it’s virtually impossible to cause damage to your motor with a wildly radical map setting. Additionally, you can also record race log information, monitor a range of data such as maintenance and system diagnostics, engine run time, and more. The most useful perk for me would be knowing exactly how much time I have on the oil and when to change it, to keep up on all the maintenance intervals.

Overall, despite seemingly trivial tweaks here and there, the 2019 YZ450F is a night and day improvement over the ’18. With a one tooth bigger rear sprocket, its motor lays the power down even better than before, and the chassis’ refinements make the bike easier and more fun to ride. We all know riding a 450 can get rowdy, and these refinements help it be more forgiving, too. If you’re in the market for a new 450, the 2019 Yamaha YZ450F is definitely a bike to consider. It’s currently available in dealerships nationwide and will run you $9,299, but if you already have an ’18, you don’t need to trade up for a ’19 unless you have cash burning a hole in your pocket. Many of these improvements aside from the front fork lugs, axle brackets and wheel collars are all availabe through the aftermarket.