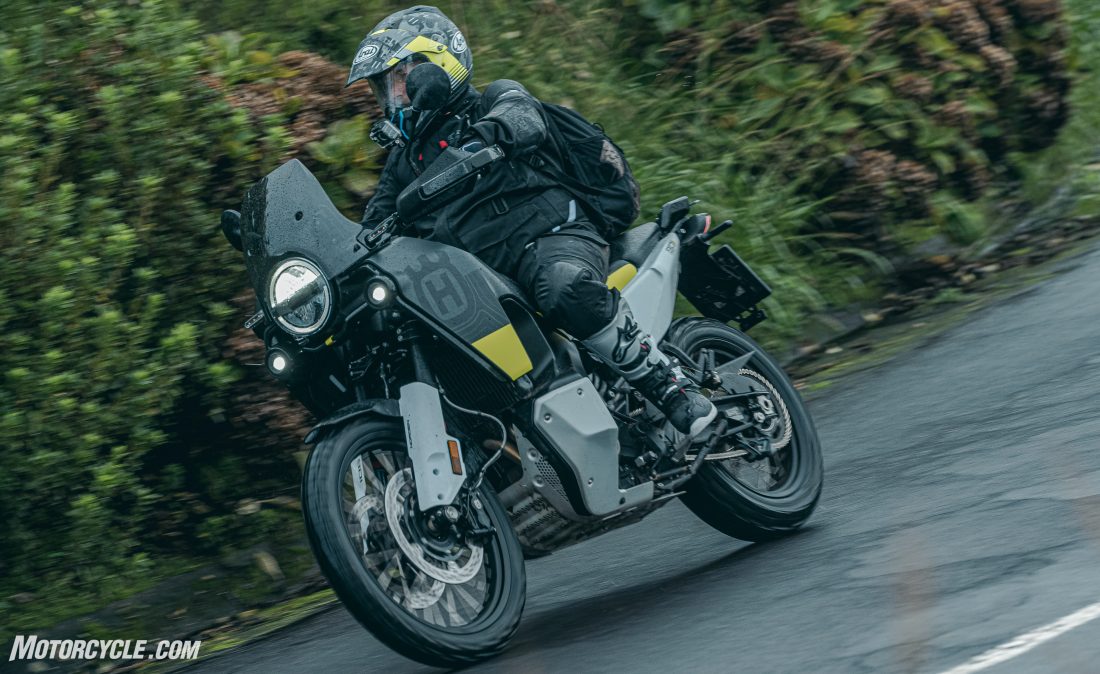 Just wanted to drop a quick note to say thanks that your vacation plans totally shat on your chance to compare Husqvarna’s all-new entry into the Middleweight Adventure Touring category, the 2022 Husqvarna Norden 901. I know how you were looking forward to traveling to the Azores to sample what might be a game-changer for the Swedish-turned-Austrian brand, which has experienced a remarkable renaissance under the wing of PIERER Mobility AG.

Frankly, dude, other than not having to endure pissing-down rain on the first day, you missed out.

Now, I know you might think, like a lot of ADV hardcores, that the Norden 901 is just a gussied-up version of the KTM 890 Adventure R you sampled back in February, but it just ain’t so. Husqvarna has arguably taken the Katoom’s basic architecture and hyper-refined it with, dare I say, a gentlemanly character. As a result, the Norden feels quite different from your beloved 890 Adventure R. It’s an ADV machine that should appeal to a more diverse crowd than the KTM. It isn’t the ultimate hard-edged off-road steed. The Norden 901 can chew the same dirt as its KTM cousin, just not in the same way. It favors a slightly less frenetic pace off-road, while offering greater comfort during long stints on the highway. According to Husky officials, that was the goal from the start. 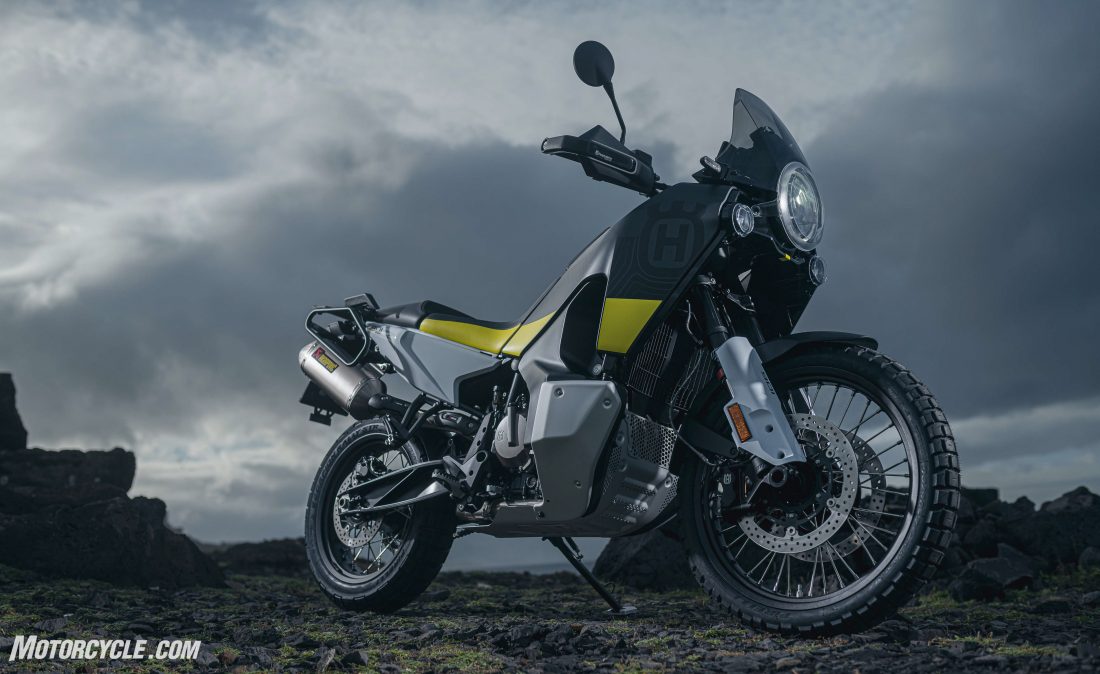 Besides, you already know the magic of the Norden’s motor. Smooth as silk and oozing torque everywhere except maybe at the very top of the rev range, the Norden can practically help you move a mountain, let alone negotiate its curves and inclines. Its dynamic and responsive Dell Orto throttle bodies and EMS allow you to dial up the precise amount of power for just about any obstacle in your way. You can almost lug the engine low enough to count the cadence of every firing stroke, or you can scream it very close to the rev limiter. It simply produces whatever thrust you need. Magnificent!

Like I said before, Ryan, the first of our two days of riding the Azorian island of San Miguel was a real soak-fest. At first, I thought it would suck having to guide the 498-lb (fully fueled) Norden 901 along the island’s narrow and curvy roads. Topped with wet asphalt, and worse – the snottiest of slick cobblestones I’ve ever experienced, these surfaces definitely put the Norden 901’s plethora of rider-aid electronics to the test. Accessible through Norden’s excellent new 5-inch TFT display (not the 7-incher found on the KTM 1290 Adventure as some surmised), the package includes three standard riding modes (Street, Rain, Off-Road). There’s also an optional Explorer mode if you really want to get jiggy with it in the outback. In addition, the Husky is equipped with the same switchable Bosch Cornering ABS which utilizes Street and Off-Road modes and the handy Cornering Motorcycle Traction Control (MTC) with nine levels of intervention (plus off) at your fingertips.

With traction at a premium, I played around with the Norden’s electronics and ultimately found bliss in Off-Road mode with the MTC set at 3 (9 is the highest level of intervention) and turning off the rear ABS. Explorer would’ve been the right call in wet, tacky conditions, but rear wheelspin was just a bit too much in the slick conditions. Conversely, Street mode curtailed the thrust a little too much. And Rain mode? It might as well be called Ice mode because it freezes the Norden’s peak power delivery at 82 horsepower. I simply don’t see where a competent rider would need that much intervention, but it’s there if you do need it. Training wheels aren’t included…but the point is…you can dial in a practical power setting for any conditions you encounter on your own adventure. The Norden always has your back.

Alas, my dear Ryan, there are componentry differences that separate the Norden 901 from its KTM counterpart where it comes to ultimate off-road mastery. The most obvious of these is the suspension. Husqvarna opted to fit the Norden with a 43 mm WP APEX fork rather than the WP XPLOR-USD, 48 mm fork on the 890 Adventure R. It’s a fully adjustable separate-function fork, housing the compression damping in the left leg and the rebound damping in the right. That said, the APEX’s 8.8 in. (220 mm) of travel is a full 0.8 in. (20 mm) shorter than the EXPLOR’s 240 mm. Likewise, the Norden’s WP monoshock isn’t nearly as trick as the 890 Adventure R’s. It’s still a direct-link system, but with no PDS or piggyback reservoir and no compression adjustability either. However, Norden’s shock does get a handy preload adjuster knob. I’m told the ’21 890 Adventure R didn’t have that, but I guess we’ll see what happens in 2022, huh?

Husky officials told me they were willing to sacrifice a bit of off-road prowess for an added measure of on-road comfort on the Norden. True enough, the Norden delivers a plush and supple ride on asphalt, concrete, or cobblestone. My test bike was a little jouncy with the stock settings, but that was quickly cured with a one-click increase in compression up front and two additional clicks of rebound front and rear. With that, the next 200 miles were controlled and comfortable, no matter how bumpy the serpentine ribbon that lay ahead.

It was a little different matter when the pavement ended, however. The Norden can be dialed in to handle some rough country, but that 20 mm loss of travel is most noticeable when you push the pace. It’s not difficult to blow through the travel if you happen to hike the big Norden into the air, here or there. Said landings usually result in bottomed-out suspension front and rear, but nothing more. The Norden’s chassis maintains its composure, so you don’t have to worry about being thrown into a headshake condition. Still, that suspension clank is a polite reminder to dial back your aggression a little bit.

Whether you do or you don’t, though, the Norden 901 chassis is unflappable. It steers lightly and offers excellent feedback over whatever terrain you choose. It doesn’t feel too long or too short, and it places its poundage well enough that the only time you feel like you’re on a big bike is just before you let out the clutch. Even sliding the rear end is no big deal as long as you aren’t applying a lot of whiskey throttle. The Norden is as predictable and friendly as your grandma’s rocking chair.

The Norden 901 also gets an entirely different rotationally molded fuel tank in the interest of placing the go-juice in a more Cg-friendly location and to better complement that oh-so-sexy Norden bodywork. The result is a tank that is wider at the top and tucked in at the bottom for a slimmer profile. C’mon, Ryan. Can you really say you’ve ever seen a KTM that looks this good? The change costs some capacity, but the Norden 901 can probably make do with just a little over 5 gallons compared to the KTM’s 5.3. Husqvarna says you’ll still get over 248 miles of range between fill-ups. God knows that the Norden 901 can still hold out longer than you can before you start craving your favorite gas-station beef jerky. I should also mention that the fuel cell plays a part in the Norden’s excellent ergos, giving the bike a rather slim-waisted feel.

But the most critical part, the one that really separates the Husqvarna Norden 901 from the KTM 890 Adventure R, is the seat. If the Norden’s two-step adjustable saddle were the only difference between the two models, you’d probably swear you were riding two different bikes. Husqvarna fiddled with varying densities of foam until they got the one that would make the baby bear shed a tear. It’s just right! Slim enough to provide a tremendously narrow feel at the Norden’s waist when seated or standing, it tapers into a wide, almost tractor pan-like profile that allows you to scooch back and enjoy a relaxing ride all day long. It just goes to show that the Mattighofen crew does possess the talent to engineer a seat that doesn’t make you feel like you’re sitting on a sharp-edged 2 by 4.

The Norden’s braking components are by J. Juan. Lest you decry the lack of Brembos, know that these Spanish-made brakes are part of the Brembo group, so there’s little room to doubt their quality. Up front, four-piston, radially mounted brake calipers and two 320 mm brake discs apply plenty of whoa in concert with a 260 mm brake disc actuated by a two-piston floating caliper. Feel and feedback are excellent at both ends, and you can dial in power to your liking by simply experimenting with the available ABS settings. Easy peasy.

What needs to change?

Was there anything I didn’t like about the Norden 901? Yeah, as a matter of fact, there was. I can appreciate that the Husky comes standard with the Easy-Shift function, affording the ability to bang upshifts and downshifts without disengaging its smooth-and-precise Power Assist Slipper Clutch (PASC). The problem I had wasn’t with the system’s functionality but rather the Norden 901’s shifter. Unless you have boots with very little plastic and/or a fair measure of ankle articulation, you’ll probably find the shift lever arm to be too short and its location too low. With my Alpinestars Tech 5s I had a hell of a time getting comfortable, consistent upshifts, and I hit more than a few false neutrals along the route. Otherwise, the shifts were peanut-butter smooth when I got them right, and even if I shifted too early, the Norden 901 motor always made enough torque to take up the slack.

And there’s one change I’d make if I really wanted to try and get the Norden 901 on a slightly more level playing field with the KTM 890 Adventure R: tires. If I knew that my adventures would include a lot of dirt, I’d take off the Norden’s Pirelli Scorpion Rally STRs and swap them with a set of Continental TKC 80s. The Contis are still the gold standard in Adventure bike tires, and the off-road grip they provide would be a better match for the Norden’s power, particularly when cornering.

After that, it would just be a matter of accessorizing the Norden to my liking. Fortunately, Husqvarna is already offering a bunch of cool add-ons, such as a taller windscreen, Touratech aluminum side cases and top case, or Husqvarna soft cases. There’s also a suspension lowering kit that drops the seat height another 22 mm without affecting the Norden’s riding dynamics; heated seats; heated grips; and an Akrapovič titanium muffler that shaves weight and doesn’t require any ECU tuning.

Husqvarna is also developing a Ride Husqvarna Motorcycles app that lets you connect a smartphone to the Norden 901 via Bluetooth. The app gives you complete control over incoming calls, audio playing, and offers turn-by-turn navigation viewed through the TFT display. Operation is via the handlebar-mounted menu switch.

At $13,999, the Husqvarna Norden 901 is set to hit the ground as a reasonably priced machine that checks all the boxes for all but the most dirt-crazed riders. It may not eclipse the 890 Adventure R when the going gets really rough, but it more than makes up for that with superior comfort over the long haul. In fact, it might just be the best all-around ADV bike on the market in 2022. Time will tell.