Yoshimura has released the following video to promote its involvement with the AutoTrader Yoshimura Suzuki team. 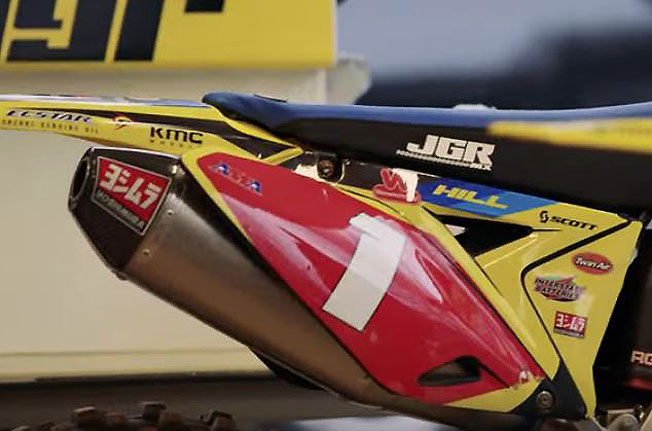 The Autotrader/Suzuki/JGRMX Team was founded by and is run by Coy Gibbs, son of NFL Pro Football Hall of Fame Head Coach Joe Gibbs. Joe Gibbs won three Super Bowls as the head coach of the Washington Redskins, along with four NASCAR Sprint Cup Series Championships, and four NASCAR XFINITY Series Championships as a NASCAR team owner. The JGRMX team, then aboard Yamahas, made its debut on January 5, 2008 in Anaheim, California, at the opening round of the Monster Energy AMA Supercross Championship.

In October 2016 Suzuki Motor of America announced its support for the JGRMX 450 team for 2017. That partnership has been upgraded for 2018, in which JGRMX will serve as the sole Suzuki Factory Racing team, replacing the RCH Yoshimura Suzuki team, which ceased activity at the end of the 2017 Lucas Oil Pro Motocross Championship. The JGRMX team now fields riders in both the 450cc and 250cc ranks, with Weston Peick and Justin Bogle competing in the 450cc class and Josh Hlll, Jimmy Decotis, Phil Nicoletti and Kyle Peters competing in the 250cc class.