The Ox Motorsports Honda is declared the official winner of a Baja 500 that suffered three fatalites, including two motorcycle competitors.

The Ox Motorsports 1X Honda piloted by Colton Udall and Mark Samuels has been declared the official motorcycle winner of the 48th Bud Light SCORE Baja 500.

SCORE confirmed the results today along with an official statement confirming three deaths during the event. All three occurred on June 4, and two of them involved motorcycle competitors. SCORE released the following official statement on the incidents, which occurred separately:

“The closing time on the race course was delayed by one hour, 10 minutes as SCORE and local officials worked on the aftermath of an accident early during the start of the cars, trucks and UTVs involving a race truck within a half mile of the start. Racer Todd Pedersen, Orem, Utah, while negotiating a turn entering the Ensenada wash and attempting to avoid some fans, eventually hit three spectators. An 8-year old boy was fatally injured in the accident, according to police on the scene. He was transported to an Ensenada hospital where he was pronounced dead on arrival. The boy’s mother was hospitalized and is reported in stable condition at a hospital in Ensenada with head and leg injuries. The identities of the two victims were not released.

“In the first racer fatality, Pro Moto Unlimited rider Travis Livingston, 34, of Palmdale, Calif., crashed at race mile 288.9. When SCORE medical personnel arrived, while attempting to stabilize him, Livingston went into cardiac arrest and could not be revived. In the second racer fatality, Sportsman Moto rider Noah Evermann, 34, of Alaska, was found dead near his motorcycle at race mile 180.9 by another race team.

“No further information was released regarding all three accidents as all three are still being investigated by Ensenada Municipal Police.”

Udall and Samuels officially completed the 475.52-mile race distance in a time of 9 hours 18 minutes and 18 second at an average speed 51.32 mph. Their race time was not contiguous and was calculated after Udall was held by SCORE officials at a two-way section of the course to ensure the safety of the motorcycle competitors. It was the team’s third consecutive SCORE win. The Ox Motorsports won the 2016 San Felipe 250 held on the Sea of Cortez side of the Baja Peninsula, and it is the defending Bud Light SCORE Baja 1000 Champion. Its Baja 500 went relatively smoothly despite dust and temperatures that hovered around 115 degrees Fahrenheit near San Felipe and in the Borrego Desert.

“The heat was extreme,” Udall said after crossing the finish line in downtown Ensenada. “I’ve never really raced in anything hotter than that before in my life. I pretty much just raced 250 miles of 115-degree weather, and my brain feels like it is cooked. The San Felipe section of the course is always the toughest, and it was anything you could do to just get through the section in the heat. The most important thing about a SCORE Baja race is knowing the course really well. You have to prepare, and you have to ride the course a bunch, and that’s the only way you’ll be able to hold it wide open. For me (in preparing for long mileage), I just do a lot of cycling. It helps me think. I have a lot of time to train, and it keeps my heart really strong. When your body starts breaking down then your mind controls it. As long as you don’t run into a ditch, you can cover a SCORE Baja race at the highest level if you’re fit.”

The 1X team faced a stiff challenge for this Baja 500 victory early in the race, however. The 45X Bremen Racing Honda team of Francisco Arredondo, Shane Esposito, Roberto Villalobos, Justin Morgan and Kendall Norman started first. Udall and Samuels passed their way up from the eighth starting position to take over the lead on adjusted time early, but it took them some time to gain the overall physical lead. The Bremen team’s challenge effectively ended when Penhall crashed at high speed while battling bar to bar with Udall in a whoop section near San Felipe.

“We had a really good race going on with the 45x bike,” Udall said. “They had a 3-minute gap when I got on the bike. I pulled up alongside of Ryan Penhall, and we were racing down the whoops in 115-degree weather and they are the gnarliest whoops in Baja. He hit a rock or something and took a pretty bad digger, so I had to turn around and help him out a little bit.”

The Bremen team would run into more trouble later in the race when rider Roberto Villalobos struck a horse that was on the course, reportedly suffering a broken tibia. The crash occurred in roughly the same section where Kurt Caselli lost his life in the 2013 Baja 1000. The team was able to continue, and Arredondo rode the bike to the finish line in Ensenada to net second overall, nearly an hour behind Udall.

“We had some challenges today, so we are just happy to be here,” Arredondo said. “We are happy that Ryan [Penhall] is going to be okay, because that was a really bad crash and I was very worried about him. He looked to be very injured, but now he is good. But Roberto is injured for sure–a tibia a for sure and maybe some other broken bones. We are running faster then ever, and we are not going to give up. We have a very good team.”

The Honda-mounted SRT Racing team of Kevin Murphy, Morgan Crawford, Jordan Brandt and Cory Graffunder finished third overall aboard a Husqvarna FE 501, nearly another hour behind the Bremen Honda team. The race went fairly smoothly for the team despite a silly crash by starter Crawford in the Ensenada was just a couple minutes after he started the race.

“The hardest part for me was the damned foot of water that I hit in the wash this morning,” joked Crawford, who started the race for the team and also rode the last shift to the finish line in Ensenada. “I probably only went a mile before I wadded it up in the mud. The front tire hit a sink hole, and it just totally tucked me. I was head-to-toe covered in mud, and I had no goggles, so I had to stop and rinse them as best I could, and I had like five guys pass me. I got the bike back at Race Mile 440, up at the meadow, and it was no big deal running backwards. It was actually clear, and I

“Today really tested our character,” Dal Soglio said. “It was very far from a smooth ride. It all started this morning when I hit a fence at Race Mile 55 and bent the bars pretty badly and knocked the hand guards off. I was battling with Colton [Udall] a little bit, and sometimes you get a little excited [laughs]. It was really hard day. Everyone had problems. We had a tire blow out, our front brake caliper came off. Nic [Garvin] had to ride The Summit without a front brake. But the goal is just to finish, and we are here. This was just a hell of race.”

New team recruit Myers, who took over the Pro Limited Bike from rider of record Winkelman just 100 feet from the starting line in Ensenada, had a strong day. He also finished the race for the team.

“We mixed it up all day,” Myer said. “These [Husqvarna] bikes are so new to us. They [Monkey Business] came down to San Felipe, but we had a rider crash the bike, so for this race they tried really hard to put together a new program with some more experienced riders. This is my 18th Baja 500, and it has been a good time. I love it. I think I have 11 class wins now, and I’m just pumped. The start was really difficult today. It was siltier and rougher than I ever remember it.” 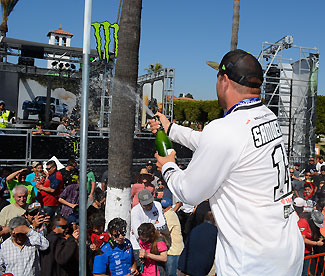