Go ahead, but if your question is stupid, you’ve been warned…

If you choose to email a question to this forum, then you must conduct yourself accordingly. Therefore, the following rules are in order:

1. Do not write your email to me IN CAPS. If you do so, I will print out your question and do terrible things to it.

2. Do not request a personal e-mail response. Since I get thousands of questions each month, trying to answer them all would cut deeply into my leisure time, which I value more than your current state of confusion.

3. Try to spell at least in a semi-correct fashion. If you choose to mangle the English language, expect no mercy from this quarter. You might be mocked severely.

4. Do not ask for me to send you copies of my many manuals and literature. I am not in the library business, nor do I want to spend the bulk of my day at the copy machine just because you’re too lazy to ask your dealer, or look around a bit.

5. Don’t bother me with truly stupid questions, like how to get 50 more horsepower for a buck and a half

6. Now that you know the rules, think carefully and have at it!

Oh yes … I’ll leave your e-mail unedited, for what it’s worth.

***
SUBJECT: 250 MAICO POWER?
I want to get a ’70 through ’74 Maico and start vintage racing. However, all the Maico big bores the 400s in such, cost way too much money. I’ve been tempted to buy one of the 250 Maicos, but a friend of mine said that they are too slow. What’s your opinion?
Mike Dunn

I remember when we tested the 250 Maico along with a Husky and the CZ. It was definitely the slowest bike of the group when we had any sort of a drag race. However, whenever we checked the lap times the Maico was a few seconds faster. You can attribute that to the excellent handling of the bike. Yes, they were not a very fast 250, but they certainly did work on the track.

***
SUBJECT: PIPE PAINTING
I’ve got a KX125 two-stroke and my pipe needs painting. Is it any kind of paint that will hold up under the heat of an exhaust pipe?
Phil Mackey

Yes. Go to O’Reiley auto parts and they sell a black paint that’s heat resistant. I think it’s about four bucks a can. I’m sure you’ll be able find a system at some other stores also.

***
SUBJECT: CLEANING SPARK PLUGS
I’ve got an old beater bike that burns oil and fouls spark plugs on a pretty much regular basis. I don’t want to spend money on it because I don’t have any money, so I have been cleaning the spark plugs up from all-black and cruddy looking in trying to reuse them. What is the best way to clean one of these plugs?
Paul Leclure

You can get one of the spark plug blasters for somewhere in the range of $10-$20 and they will go and clean any plug really well quickly. The only thing is they sometimes leave behind some of the writ that cleans the plug it self. So you want to pick up a candle plug-in contact cleaner in spray the plug clean before you use it.

Hi, Rick. Can you tell me anything about this bike? Picture attached.
Dr. Joel Cooper

Carabela was formed from a company that produced three-wheeled industrial plant work trucks, taco wagons and mopeds for the domestic Mexican market. In 1969 they produced their first motorcycle, the 125cc “Caliente.”

By 1970 Carabela produced a full range of off-road motorcycles, from the “Caliente” to the 200cc “Carrera”, all built around a solid looking frame that copied the Maico MX125 frame. Italian motors were used, like Minirelli or Moto-Moroni, potent-looking engines.

Some strange shopping-cart technology made its way into the design of the MX Carabelas, like u-bolts holding the handlebars on, and rubber covered footpegs that could be adjusted all that way, so they folded in the wrong direction (down). Square-slide Dellorto carburetors and Marelli ignition components made certain that the new Carabela owner would be well versed in the operations of both systems, since they made Lucas and Amal products look like rocket science.

Some design flaws were showed up in the early versions, as the motor manufacturing plant had some problems with heat treating gears, and making sure the transmissions were shimmed up correctly, so they didn’t blow up in the first 20 minutes of riding. Items that pointed to a less-than-well designed motor also started to show up, like kick starters snapping off at the shaft, shifters falling off in the dirt–with the shift shaft still attached, and exploding clutch baskets that would bring the bike to an immediate and painful halt (as the rider got pitched over the bars from the weak u-bolts that held them in place).

The Carabela did handle good, though, with its frame geometry stolen from Maico and its fork technology pirated from Spanish Betors.
Gigantic, heavy hubs and wheels from the streetbike Carabela didn’t fare so well in the dirt, with broken hubs and spokes becoming a regular problem for the hapless Carabela rider. Things weren’t going well for Carabela in the USA, and soon the bikes became the brunt of many bad jokes.

By 1975 Carabela had enough of the MX market in the United States and went back to producing three-wheeled work trucks and taco wagons for the domestic market in Mexico. Carabela produced these carts and trucks, along with a moped or two, under the Carabela marque, up until 1984 when Honda bought it and shut the factory down for good.

Beware to the person who finds a Carabela in some dank garage and wants to restore it. Parts are non-existent, and even a 100% resto produces a bike that while pretty, is pretty awful to begin with.

***
SUBJECT: OLD TIME GOODIES
Wow, this is indeed an honor, Rick. I have been racing for 47 years dirt track and motocross, and started reading Dirt Bike from day one. Remember when you tested all the two-stroke oil? That was cool.

I am looking for A 1976 AW. A roller would be fine. So would a BH mouthguard, red or blue Carr 98 goggles or Hallman visor with the flip down shield. I’ve been looking a long time, but if I’m going to race vintage motocross, you must look right. I don’t know who makes up this so-called new motocross gear, but I wish Mr. Hallman would bring his gear back out. Ya I know I’m as old school as you can get and I’m damn lucky to have raced in the late ’60s and the glory days of motocross, the ’70s. That was the best. Hey, thanks for letting tell it like I see it. Let me know about the bike or gear.
Mike Lee

Yup, some of latest riding gear looks like it was designed in San Francisco.

***
SUBJECT: MAKE A TRAIL BIKE OUT OF AN RM-Z450
Was glad to see that you landed here. Been a fan since the early ’70s. Question: Any suggested mods to take a 2013 Suzuki RM-Z450 from MX to trail? I have added a skid plate, 51-tooth rear sprocket, working on a IMS 2.6-gallon tank, Acerbis hand-guards and will lace a 18″ rear wheel over the snow season. I can’t find a flywheel weight for this model/year. Suggestions?
Bill Hammond

There’s not a whole lot more you can do to the bike other than go up one tooth on the countershaft sprocket. You might also consider cutting the seat down about 1 inch if you’re 5’9″ or less.

***
SUBJECT: WEIRD HUSKY
Hi. Can I ask a question? I saw a 72 husky with a cz motor. The guy said it came that way, Is this true? Could you elaborate?
Thank You!
Jeff Skinner

The 1972 and ’73 Huskies were very bad bikes compared to the previous year’s and later years. The only thing they had going for them was that there was plenty of room in the engine compartment, therefore a whole lot of swaps found their way there. It was not uncommon to find a Honda four-stroke stuffed into one of the old Husky frames.

Saddleback Park was an area used for motocross, and in its hey day, was one of the most famous destinations for MX riders across Southern California. It was the first park in the USA designated specifically for MX.

In 1967, its main track was designed by Joel Robert and Roger DeCoster, two famous MX racers at the time. Saddleback Park hosted many regional, national, and international motocross racing events.

But in 1984 the park shut down. The park was plagued by lawsuits. There were supposedly disputes between the park operator and the landowner (Irvine Company). There had been rumors that the park would reopen, but it never happened because of the liability. The 241 toll road now runs through the park.

***
SUBJECT: DREAM TEAM FOR THE ISDT
Just watched Penton again. Good to see you in it…twice! Great movie! Now, we need one on Malcolm! I do have On Any Sunday: Motocross, Malcolm and More. It’s not enough.

Question: If you had had the chance to ride an ISDT, who would have been on your “Dream Team” and what kind of bike(s)? Where would you have liked to have ridden it? “Blackwater?” Not!

That’s about it for now. Just got back from Christmas shopping for Leslie. It’s very uncomfortable lurking around the women’s department in Sears. My cart, like a magnet, kept being drawn to the tool department!
Easy,
David “TT500” Fruhling

I would put all the riders on Kawasaki KDX200s and definitely hold the event at the Blackwater 100. The team of riders would be headed by none other than Dick Burleson.

***
SUBJECT: SUPER HUNKY ON A CHOPPER?
And finally on this brisk Monday evening…
“It takes some kinds…”, but this man had lost his mind! Many diehard desert rats know him still today as a former Editor of “Dirt Bike” Magazine; founder of the “Sahara Club”–who joined up with Louis McKey and fought the Sierra Club tooth and nail all the way to trial over the “Endangered Species Act” and the California Desert Tortoise in the 1980s… [Yawn… Hmmm…]
Yup! Rick “Super Hunky” Sieman on a “chopper” in the 1971 Mint 400! This image should come before your very eyes when you read or hear words like: “insane,” “beast” or “animal!”
Bill Fuentes Christensen 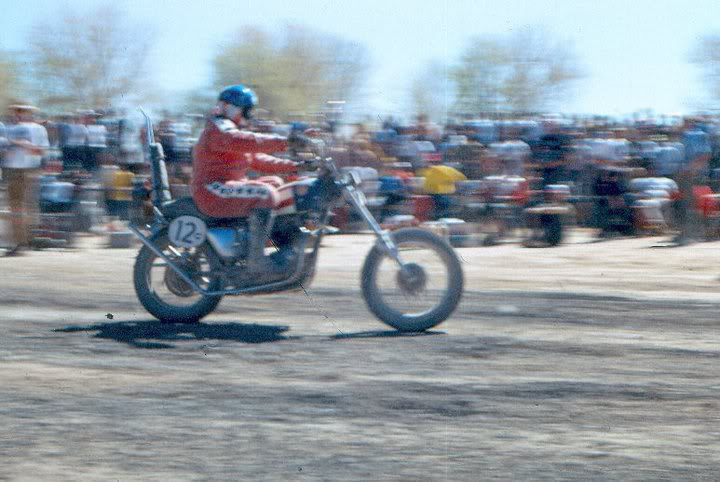 Yes, I rode that chopper in the Mint 400 while I was the ad guy for BIG BIKE magazine. Believe it or not, we finished 14th overall. If you want an autographed poster of this photo, it’s $10. 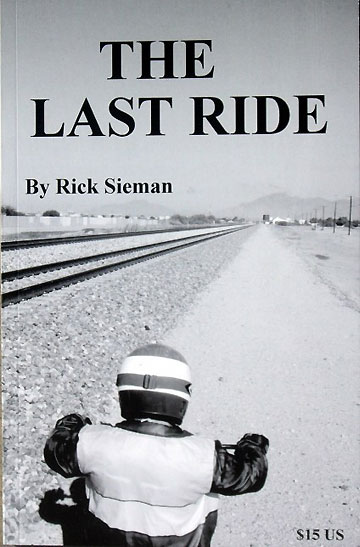 My new book, THE LAST RIDE, is at now out. It’s fiction and starts in 1969, when an 18-year-old kid just out of high school gets a chance to ride his Yamaha 250 DT1 from Pennsylvania to Los Angeles … all off-road. His adventures are truly amazing. The book then jumps 40+ years where the same person, now in his 60s, wants to get that old Yamaha back in his possession and return it home by riding it all the way there. Email: [email protected]
Paypal address: [email protected]
Website: www. [email protected]