Red Bull KTM’s Ryan Dungey capped his championship-winning Monster Energy AMA Supercross season by standing atop the podium in a mud-caked series finale at Sam Boyd Stadium in Las Vegas, claiming his ninth win of the 17-round series.

Roczen, however, was keen to continue his late-season win streak, and he quickly passed Anderson through the whoops in an attempt to catch Dungey. BTO Sports KTM’s Davi Millsaps, who missed much of the second half of the season due to injury quickly moved into fifth place, only to go over the bars in the whoops and collect Team Honda HRC’s Trey Canard.

Roczen closed in on Dungey on lap five, and one lap later he got a better drive through one of the rhythm sections to make a pass for the lead. Roczen’s run at the front didn’t last long as he came up short in another rhythm section and went over the bars. Dungey was right behind Roczen and could not avoid Roczen’s fallen Suzuki, causing the champion to go down as well. However, Dungey won the race to get back underway, and he retook the lead. Anderson was able to slide into second place, with Roczen third, but Roczen would pull into the pits shortly thereafter, as did Musquin, who also crashed in another spot on the track. That allowed Tomac to move into third, followed by Yoshimura Suzuki’s Blake Baggett and Monster Energy/360fly/Chaparral Yamaha’s Chad Reed.

Up front, Dungey maintained a lead of just under five seconds on Anderson and over 33 seconds on Tomac. The only real battle on the track was between Baggett and Reed for fourth place. Reed found a way past Baggett with two laps to go, setting the top five in the race. Dungey ultimately crossed the finish line with 11.9 seconds in hand.

“Las Vegas is not even known for rain, and I don’t even know when it’s rained here—not since I’ve been here,” Dungey said. “The track was tough, especially with the drizzle coming down in the heat races, but once that stopped the mud kind hardened up a little bit and there was a good line. Ken [Roczen] was giving us a challenge, and he was going good tonight for sure, and then he tucked it and I had nowhere to go. But it was good. I’m really happy that we ended the season strong. That was the goal tonight. The last two races were good—we were focused on the championship—but, that being out of the way, it was nice to get a win tonight, end it on a strong note and get ready for what lies ahead [the Lucas Oil Pro Motocross Championship].” 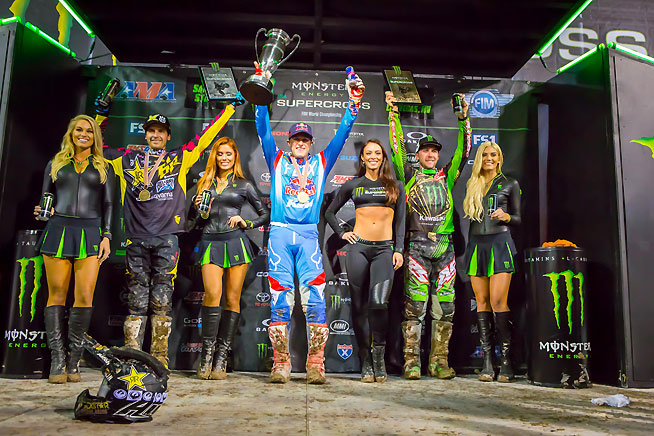