Red Bull KTM’s Ryan Dungey rolls to his eighth win of the 2016 supercross season at the Edward Jones Dome in St. Louis, Missouri.

Dungey wasn’t perfect, as he had to earn his ticket into the 20-lap main event via a semi after crashing in the second heat race, but that hardly mattered when the gate fell for the big race of the night. Dungey pulled the holeshot with RCH Soaring Eagle/Jimmy John’s/Suzuki Factory Racing’s Ken Roczen hot on his tail, and the two reprised their lead battle of one week ago at the Indy Supercross. But, just as then, Dungey kept his cool under pressure from Roczen, who would crash late in the race, and although he quickly picked up his bike and went on to finish second, Dungey was too far out of reach at that point, cruising to victory with 2 seconds in hand.

Roczen began to really push Dungey around lap six, but Dungey was able to stave off the challenge. Meanwhile, Rockstar Energy abruptly when Anderson made an aggressive pass on Brayton. Contact was made, and Brayton got pushed wide and into the Tuff Blox on an approach to one of the triple jumps, losing positions to Red Bull KTM’s Marvin Musquin and Monster Energy Kawasaki’s Josh Grant. Musquin then crashed on lap eight, dropping behind Grant.

Roczen took another shot at Dungey on lap 10, briefly taking the lead, only to see Dungey square up a turn and take it right back from him. Roczen stayed close to Dungey until lap 13 before losing the front end in the relatively flat left-hander after the finish line jump. Dungey pulled clear of the German ride and went on to take the win.

“The race wins are awesome,” Dungey said. “Each and every one, we are hungry for, and we’re excited. We were pushing the pace. Ken made a mistake, opened the gap a little bit and allowed me to get some breathing room. With about five laps to go, I kind of chilled out. There was a lot of cement showing [on the track]. The dirt was running thin in a few spots, but overall it was good. It wasn’t my best qualifying into the show. I made a mistake–I’m human–and we recovered in the main, and it was nice.”

Roczen remounted in third place and had to battle to get back past Anderson to reclaim third place. Roczen pulled off a pass just before the finish line to salvage the runner-up spot.

“I just want it really bad, and I guess things like that happen,” Roczen said of his crash. “I came in a little bit too hot in that turn and washed the front end unfortunately. I was studying some lines, and I was trying something different. I was pretty confident that once he [Dungey] had a little gap I could reel him right back in, but it was a little tough going into the sand, too, being right behind him–you can’t really see, and the turn is really tight. But, overall, once again, I’m the first loser here. We’re trying. We want it, and that’s why we’re battling for it.”

Although Anderson landed another podium finish, further padding his third-place position in the series points standings, he said he felt like he can do better. 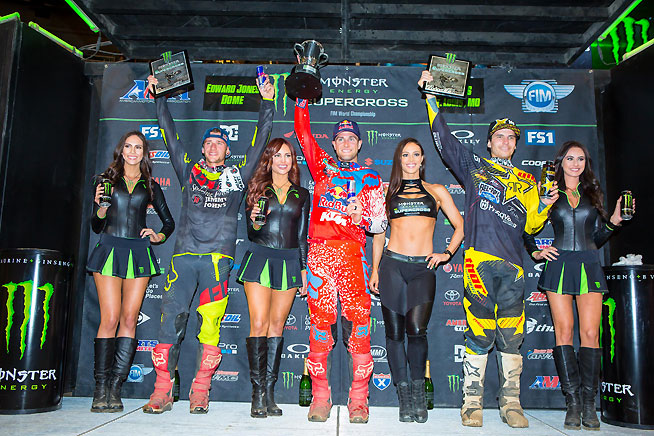