The Dust 2 Glory premiere is scheduled to take place in theaters nationwide today and today only. 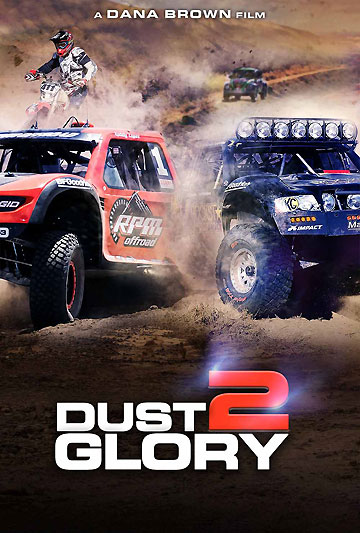 The unique, one-time showing of the film is being coordinated by Fathom Events. You can click on the link here to find out where it is showing near you and purchase tickets to see it. The film begins at 7:30 p.m. in each U.S. time zone.

The latest documentary by filmmaker Dana Brown (Step Into Liquid, Dust To Glory, High Water, On Any Sunday: The Next Chapter), Dust 2 Glory captures the essence of racing in the wild environs of the Baja California peninsula in Mexico, where racers have been chasing the dream of winning one of the big SCORE Baja events since competition first began there in 1967. The 50th Anniversary SCORE Baja 1000 took place November 16-18, 2017, a total of 1134.40 grueling miles, running from Ensenada, Baja California to La Paz, Baja California Sur, Mexico. The motorcycle portion of the event was won by the team of Francesco Arredondo.

Dust 2 Glory captures the entire 2016 SCORE Desert World Championship, with human interest stories ranging from the triumphant to the tragic. Woven throughout the film are tales of racers who give back to the Baja peninsula through their charitable work. Several motorcycle racers are featured in Dust 2 Glory, including the multi-time SCORE Champion Ox Motorsports Honda team of Colton Udall and Mark Samuels, Ironman competitors Carlin Dunne and Tony Gera and the Warrior Built racing team, which is composed of disabled veterans who tragically pay the ultimate price during the running of the 2016 SCORE Baja 500.

“If Wednesday works out well, then I’m a hero, and if it doesn’t, I’m an idiot,” Brown said in a recent interview. “Actually, this is my worst time, right now. I love working on films, and I’d much rather be doing that than worrying about things that are out of my control. I just hope people get out and see it. If they think it sucks, well, I can deal with that, but if they don’t get to see it, that would be a bummer.”