Honda’s CRF450R has had its days in the sun before.

First introduced in 2001, it wasn’t the class’ first competitive modern four-stroke motocross machine, but it has always been a contender for top honors in the class, and its Unicam SOHC four-stroke Single has not only proved to be both powerful and reliable, its valve train technology has also found its way to some of Honda’s road-going products. The CRF450R has always handled well, and save for a couple years early in the model’s life when Honda thought that the engine needed to be brutish to be successful, it has always been a smooth and user-friendly 450cc motocrosser. That strong genetic trait has only added to the CRF450R’s popularity. 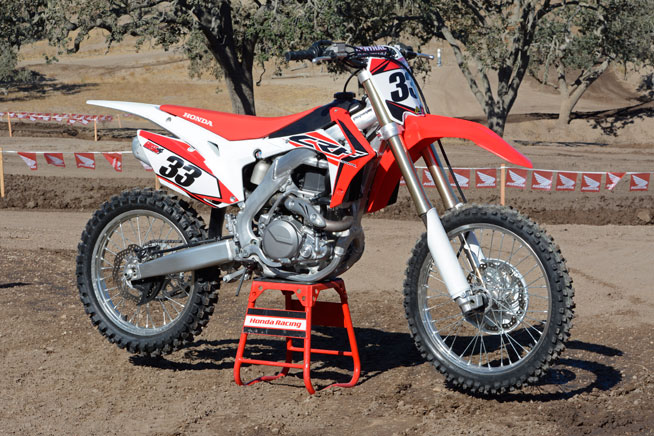 Smooth continues to be a main theme for the platform, if our recent introduction to the 2015 CRF450R at the picturesque Zaca Station MX Park north of Santa Barbara, California, is any indication. The 2015 model retains its polished character all the while featuring some significant updates to make it more competitive in a class that appears to be as cutthroat as ever.

Of the key changes to the 2015 CRF450R, many of them are centered on its 449cc, liquid-cooled, Unicam (SOHC), four-valve, four-stroke Single. The goal was to give the 2015 model more robust mid-range and top-end performance without hurting its low-end grunt—and all of this while maintaining the seam peak power output as the 2014. A new cylinder head that with a revised exhaust port was the first order of business. The head retains the same combustion chamber shape and same size titanium intake and steel exhaust valves as before, but the exhaust port now exits to the right of center when viewed from the front. Honda engineers have also revised the exhaust header length so that the header no longer wraps around the downtube on the CRF450R’s aluminum perimeter frame. The shorter exhaust length, combined with redesigned mufflers that have a larger internal diameter, help the CRF450R strike a balance between the smooth torque of the 2014 model and its increased mid-range and top-end goals for the 2015 model. To raise the rpm at which the CRF450R’s peak power occurs, revised ignition timing and fuel settings for the Dual-Timing PGM-FI fuel injection were also incorporated. Of course, the 2015 CRF450R also receives Honda’s latest innovation, the Engine Mode Select button, which allows the rider to access multiple EFI/ignitions maps stored in the CRF450R’s ECU simply by pressing a button mounted on the right side of the handlebar. A popular feature on top-shelf sportbikes for the past five years, this feature is an industry first among motocross machines, and we expect it to proliferate because of its ease of use. The system stores three different EFI/ignition maps in its stock configuration. The first is the stock map, which cannot be altered, but the other two are custom maps that can be reprogrammed via an HRC accessory tuning tool. As delivered, Mode 2 is alters the ignition timing and fuel curve to enhance traction on slippery surfaces, while Mode 3 is more aggressive for deep or high-traction surfaces. It is important to note, however, that the system does not include a holeshot setting.

At the deep and fluffy the Zaca Station circuit, BirtBikes.com test rider Ryan Abbatoye had no trouble getting used to 2015 CRF450R. After about an hour of railing corners and soaring over Zaca’s jumps, including the track’s signature jump, a mountainous step-up located right in the middle of the course, Abbatoye started to deliver his impressions.

The 2015 CRF450R’s power delivery is noticeably improved over last year’s model even though its peak power output is unchanged. There is a very electric, very hooked-up feel to its engine, which transitions smoothly and seamlessly from bottom to top, making the CRF450R easy to ride for novices while still delivering plenty of top-end for pros. It isn’t the most exciting 450cc engine we’ve tested this season, but it’s far from boring. If we had to guess at the CRF450R’s rear-wheel hp output, we’d say that it is somewhere in-between the Suzuki RM-Z450 and the Yamaha YZ450F. The Honda feels as if it pulls longer than the Suzuki but not with quite the same authority as the Yamaha.

However, the Engine Mode Select button does make a noticeable difference to the CRF’s power character, and we really like how easy it is to use. Simply pull in the clutch and push the button. A flashing light will appear with a cadence that signals what mode you are in. Overall, Abbatoye preferred Mode 1, the stock setting. Just as with the CRF250R, he felt that Mode 3, the aggressive mode, tended traded away too much top-end pull for better mid-range zip.

Shifting is typical Honda perfection. Its five-speed gearbox and multi-plate clutch deliver smooth shifts and linear action. However, the Honda’s broad torque curve give you the option of being able to short-shift the engine or simply let it carry a gear and rev.