Yamaha’s all-new YZ250FX does more than merely split the differences between its motocross-class champion YZ250F and its all-new WR250F woods machine. The FX is a serious off-road racing weapon that stands on its own merits.

The FX is more than just a WR250F without lights, and if you like to compete in GNCC- and Hare Scrambles-style off-road events, it just might be the best Yamaha quarter-liter off-road racer for your needs.

The FX is a bit more of a hard-core racer than the WR only because of the fact that WR250s EPA-mandated ECU and spark arrestor exhaust system are too restrictive for all-out off-road racing. Likewise, the YZ250F can’t match the FX’s flexibility because the YZ only has a five-speed transmission. Credit Yamaha making a bold move to produce a third 250cc four-stroke dirtbike that fits the needs off the off-road racer. Better yet, at $7890, the FX is $100 cheaper than the WR.

Naturally, the FX’s 249cc DOHC four-stroke Single engine architecture mirrors that of its sisters. That includes Yamaha’s reversed cylinder head, reward inclined cylinder and rearward existing exhaust. Yamaha engineers first introduced this design on its YZ450F back in 2010, and used it to win an AMA 250cc National Motocross Championship with factory rider Jeremy Martin in 2014. Its main advantages include a straighter intake shot to the combustion chamber, symmetrical intake and exhaust ports for more consistent cylinder filling.

Mass centralization is also key to the Yamaha’s design, which places the cylinder in a 6.2-degree rearward incline to place the top-end mass and camshaft rotational inertia toward the center of the chassis. Offsetting the cylinder 3.5mm forward of the crankshaft centerline also frees up horsepower by reducing drag; the connecting rod is more vertical at the moment of greatest combustion force, which reduces piston-to-cylinder wall side thrust.

The FX shares the wet-sump oiling system design used on the YZ and WR. Switching from a dry sump does away with an external oil tank and lines and cleans up the exterior of the motor. The FX’s camshaft profiles are the same as well, except that its decompression system is altered slightly to work with the FX’s electric starter. The piston design and 44mm Keihin throttle body are identical to the YZ and WR.

But the FX’s ECU isn’t. Testing revealed that the YZ250F’s ECU was too aggressive to deliver the desired engine tractability in the FX, so the FX gets its own ECU, which can be adjusted with Yamaha’s GYT-R power tuner the same way that the YZ’s unit can. That and the fact that the FX’s wraparound exhaust system does not feature a spark arrestor means that the FX is not legal for off-road riding on public land. Like the YZ, it is a pure racebike. On the other hand, the FX does receive the WR’s engine cases to accommodate a handy electric start system (a kick starter is still fitted as well) and to house its six-speed transmission.

Yamaha invited us to sample the YZ250FX at Cahuilla Creek Motocross Park in Anza, California, on the same day that we tried out the new WR250F. While both machines are designed for off-road use, they go about their business in an entirely different fashion.

Whereas the WR imparts a more electric power character that is attenuated by its EPA-strangled ECU, the FX is unencumbered by such strict emissions requirements, and the difference is obvious at the first hit of the throttle. The FX feels much more YZ-like, with an impressive low-end lunge that transitions seamlessly into a very usable mid-range and continues to pull cleanly all the way to its rev limiter. Throttle response through the FX’s 10-hole fuel-injector is clean and crisp, and it gives the FX that same “I’m bigger than a 250” power feel that we love about the YZ. There’s no need to abuse the clutch to get the 250 into a usable rev range. It’s strong everywhere.

Yamaha’s sharp-shifting six-speed transmission gives the FX more flexibility than the YZ’s could ever have for pure off-road use. The FX’s first and second gears are steeper than the YZ’s ratios for low-speed picking through tight obstacles, while third gear is identical to the YZ’s. Fourth and fifth gear are taller, and the additional overdrive sixth gear not found in the YZ’s transmission gives the FX a warp-drive top speed in wide open terrain. And yet the FX still feels very much like the YZ to us. In fact, while our test day at Cahuilla Creek didn’t include any time on the facility’s first-class motocross track, we are anxious to log some time with the FX on one just to see how similar or different they really are.

They handle about the same, as the FX’s aluminum bilateral beam chassis and removable subframe are practically identical to the YZ250F’s. Both feature a 27.08-degree rake, 118mm trail and 38.0-inch seat height, but the FX’s electric starter, sixth gear and other items add 18 lbs. to the package, which checks in at a claimed 249 lbs. wet. To make the chassis more compliant over off-road terrain, the FX’s engine mounts are 2mm thinner than the YZ’s 6mm units.

The FX’s lighter weight makes for a more responsive-handling motorcycle than the heftier WR. Steering in both low- and high-speed sections is feather light, and the FX is mostly stable, although expert tester Ryan Abbatoye noted that the FX exhibited a slight headshake at all-out desert racing velocity. Its ergonomic layout is narrow and slim, which allows the rider to place his or her weight where needed to maintain traction and momentum. Running the FX through its paces on Cahuilla’s rocky and sandy 4-mile single-track trail sections was a riot. We think that part of the FX’s handling prowess should be credited to its Dunlop AT81 off-road tires, which have a softer sidewall that makes them feel more compliant over rocks and sharp bumps.

Speaking of bumps, the FX’s suspension settings differ from both the YZ and the WR. It uses the same basic 48mm KYB air/oil separate Speed Sensitive System spring fork up front, and sports the same 4.4 N/mm springs as the WR, but its valving is different than either the motocross or enduro machines. Out back, the FX’s fully adjustable KYB rear shock, which uses Yamaha’s proprietary Kashima coating to reduce stiction and features a large 50mm piston for better oil control. It is also fitted with the same 56 N/mm rear spring as the YZ, but it is valved for aggressive off-road use instead of motocross. The FX’s suspension performance was excellent in the conditions on our test loop. With 12.2 inches and 12.4 inches of front and rear wheel travel respectively, it is not as supple as the WR’s settings, but it does a fine job of keeping the FX composed at higher speeds, and it can handle big hits with relative ease.

We also like the FX’s brakes, which boast Nissin calipers with 250mm front and 245mm rear wave rotor-style discs. The twin-piston front brake delivers plenty of whoa power with a linear feel, and the rear isn’t too sensitive in loose terrain.

Interestingly, the FX also features the 160-Watt generator found in the WR to power headlights and other accessories, and yet it comes with neither a headlight nor the accessory electric fan found on the WR. We can live with that, but the decision not to equip the FX from the factory with a skid plate to protect its lower frame and engine cases from damage is a mistake. The mounts are there if you want to add your own skid plate. And you will. 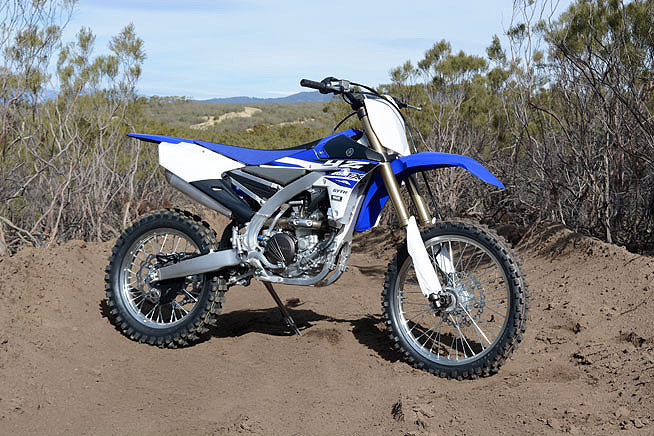 At the end of the day, Yamaha deserves a lot of credit for introducing the YZ250FX. Doing so reaffirms the Japanese company’s commitment to off-road riders, and we appreciate that very much. That said, releasing a sub-standard machine in the face of competition from European off-road giants such as KTM and Husqvarna wouldn’t have been to cool. Fortunately, Yamaha had the best 250cc four-stroke platform from which to build it, and it shows. The FX is one awesome off-road machine, and we expect to see a lot of them in the winner’s circle at off-road races across North America in 2015.