RANCHO CORDOVA, Calif. (May 20, 2017)–The Lucas Oil Pro Motocross Championship, sanctioned by AMA Pro Racing, kicked off its 2017 season on Saturday with the 49th running of the Red Bull Hangtown Motocross Classic at Prairie City SVRA and a wide-open battle for each respective championship. The first of 12 rounds this summer provided hot temperatures and a huge crowd that witnessed a stellar battle for victory in the 450 Class, from which Monster Energy Kawasaki’s Eli Tomac emerged with a gritty overall win after an impressive come-from-behind effort in the final moto. In the 250 Class, Rockstar Energy Husqvarna Factory Racing’s Zach Osborne earned the second overall win of his career with a dominant effort, sweeping both motos.

As he neared the completion of the opening lap Craig crashed out of the lead, allowing Musquin to assume control of the 30-minute-plus-two-lap moto. As that unfolded Tomac surged into second, passing Webb in addition to Craig. From there the race became a two-rider battle. Musquin kept Tomac’s advances at bay for a couple laps, but the Kawasaki rider made an aggressive move at the start of Lap 3 and slipped by on the outside of his KTM counterpart. Musquin made a slight bobble shortly thereafter, which established a separation between the two that would continue to grow.

From there the attention focused on the battle for third between Webb and Monster Energy Kawasaki’s Josh Grant, who started fifth. Grant patiently waited for his opportunity to strike and did so on Lap 5. From there the top three remained unchanged through to the finish. Despite a small crash late in the moto that cost him over 10 seconds to Musquin, Tomac still took the win by 15.4 seconds.

Tomac had his work cut out for him in the second moto, which saw Grant take the Motosport.com Holeshot ahead of Musquin, RCH/Yoshimura/Suzuki Factory Racing’s Broc Tickle, and Autotrader/Monster Energy/Suzuki/JGRMX’s Justin Barcia. Tomac was outside the top 10 as the field entered the first turn, but managed to claw his way into eighth before the completion of the opening lap.

The holeshot allowed Grant to take advantage of the clear track and he set a strong early pace to open a gap on Musquin, while Barcia slotted into third. Behind them Tomac was able to make some early passes to break into the top five and then engaged in a battle with Rockstar Energy Husqvarna Factory Racing’s Dean Wilson for fourth. Tomac’s patience paid off on Lap 5 as he was able to make the pass on Wilson for fourth. Shortly thereafter he caught Barcia for third and put himself in podium position on the same lap.

With Grant in the lead, Musquin in second, and Tomac in third the battle for the overall win was still up for grabs, with Grant in control of his own destiny. After leading the first seven laps of the moto, Grant slowly started to lose ground to Musquin, who picked up his pace following Tomac’s move into third. The lead duo battled for the lead briefly, but Musquin was able to make the pass on Lap 7 and put himself in position to win the overall. Tomac’s charge to the front wasn’t complete, and he quickly disposed of his teammate to move into second on Lap 9. He then closed in onto the rear fender of the leading KTM, producing an incredible battle for the lead that elicited roars from the crowd.

Musquin and Tomac jockeyed for the top spot for several laps, with the Frenchman able to counter every one of Tomac’s advances. The leaders continued to trade lines all over the track, coming within inches of making contact with one another on numerous occasions. On Lap 12 Tomac was able to take advantage of a slight bobble by Musquin and make another impressive outside pass. Once in front Tomac quickly opened a lead, eventually crossing the finish line 8.7 seconds ahead of Musquin. Grant followed with a strong third-place effort.

With identical moto scores for the lead trio across both motos, Tomac (1-1), Musquin (2-2), and Grant (3-3) completed the overall podium in the same fashion.

“There was some good battling today. In the first moto I got into a good groove quickly and made the passes early to go on and win, but the second moto was tough,” said Tomac. “That was a good ole classic battle [with Musquin]. I really had to dig deep and try every line possible to make time up on the leaders. It feels good to get through the first round and leave with the red plate.”

The opening 250 Class moto saw Monster Energy/Pro Circuit/Kawasaki’s Adam Cianciarulo claim the first Motosport.com Holeshot of the season, with Troy Lee Designs/Red Bull/KTM’s Sean Cantrell slotting into second in his pro debut and Osborne settling in third. Osborne applied pressure on the rookie on Lap 1 and moved into second, ultimately setting his sights on Cianciarulo for the lead. The lead pair swapped fast laps throughout the first portion of the 30-minutes-plus-two-laps moto before Osborne was able to eventually get around the Kawasaki and take control of the race. Behind them, Yamalube/Star Racing Yamaha’s Aaron Plessinger fought his way around Cantrell to take over third.

Once in the lead Osborne was able to open a comfortable gap that he easily maintained throughout the remainder of the moto, which was further aided by lapped traffic. Plessinger applied pressure on Cianciarulo for several laps, but eventually both riders asserted themselves in the remaining podium spots.

Osborne took the third moto win of his career 5.3 seconds ahead of Cianciarulo, with Plessinger following in third.

With the overall win within reach, Osborne took control of Moto 2 immediately out of the gate, grabbing the Motosport.com Holeshot over the Monster Energy/Pro Circuit/Kawasaki duo of Joey Savatgy and Cianciarulo. Savtagy showed impressive early speed and was able to briefly lead the moto, but Osborne got back around on Lap 1 and never looked back. Cianciarulo gave up third place to Plessinger and would soon fall out of contention. The rider to watch in the early stages was Troy Lee Designs/Red Bull/KTM’s Alex Martin, who started fifth. Martin was able to surpass both Cianciarulo and Plessinger on Lap 2 and continued his push to the front by passing Savatgy for second on Lap 3, bringing Plessinger along with him into third.

Osborne remained in control of the moto throughout, but another rider was on a charge to the front. After starting seventh Monster Energy/Pro Circuit/Kawasaki’s Austin Forkner stormed through the field and broke into podium position on Lap 7 after passing Plessinger. His determination continued and he was able to close in on Martin for second. The KTM rider fended off Forkner for several laps, but gave up the spot on Lap 14 and dropped off the podium after losing another spot to his brother Jeremy, who rides for GEICO Honda, that same lap.

Osborne took the win by 2.9 seconds over Forkner, with Jeremy Martin in third.

The 1-1 sweep gave Osborne an easy overall victory, the second of his career, while Alex Martin’s consistent 4-4 results were enough to give him the runner-up spot. Plessinger completed the overall podium (3-5) after tying with Martin in points, but losing the tiebreaker based on second-moto results.

“It was nice to carry the momentum from supercross and take the pressure off the [start of the] outdoor season, and come out of here with max points,” said Osborne. “This is always one of the roughest tracks we have all year, so you always come in here kind of guessing. It’s good to know we’re leaving with the points lead and a win. My goal was to be in the top five and challenge for a podium, so to come away with a 1-1 is pretty awesome.”

Osborne already holds a double-digit lead of 14 points in the 250 Class standings over Martin and Plessinger.

The 2017 Lucas Oil Pro Motocross Championship continues next Saturday, May 27, with its second round from Glen Helen Raceway in San Bernardino, California. First motos of the FMF Glen Helen National can be seen live on MAVTV at 1 p.m. PT / 4 p.m. ET, while second motos will air live on NBC Sports Network at 3 p.m. PT / 6 p.m. ET. Additionally, all the action can be seen as it unfolds online via the NBC Sports Gold app. 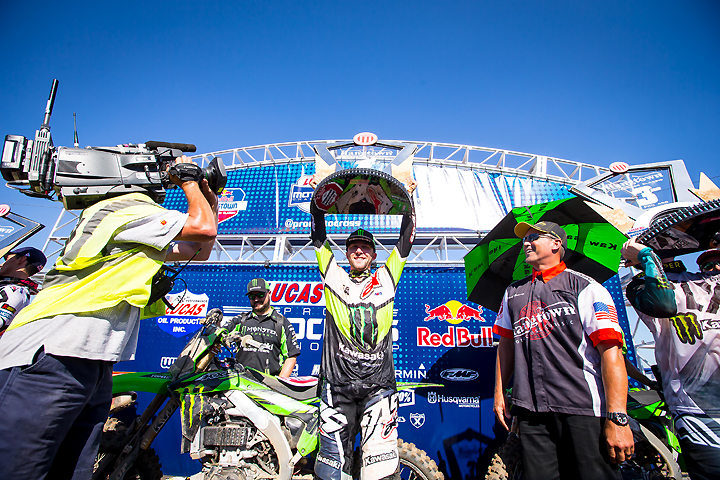 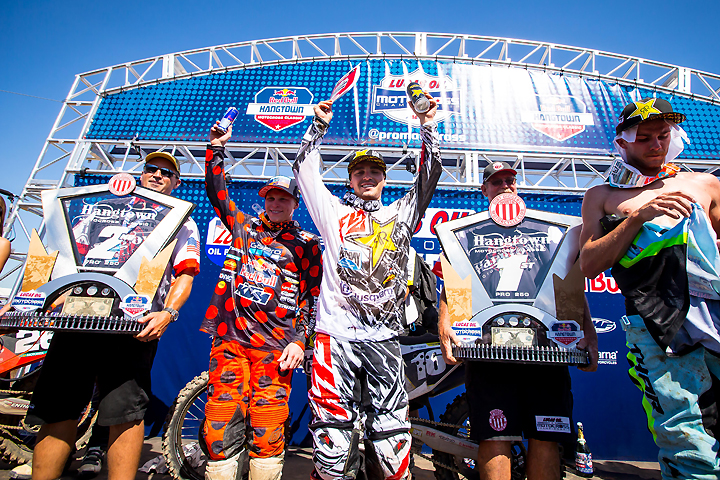