The following is from Alta, a manufacturer of electric-powered motorcycles, discussing its plans to compete in the Red Bull Straight Rhythm with Josh Hill:

No stranger to competition, Alta continues their unique position of being the first electric motorcycle to seek victory in national-level events by tapping Josh Hill to race the company’s Redshift MX at the unique supercross-inspired event, Red Bull Straight Rhythm taking place at Fairplex in Pomona, California on October 22.

For those unfamiliar with the upcoming event, Red Bull Straight Rhythm takes all the features of a typical supercross track and unwinds them into a straight half-mile course. Racers then go head to head in heat races, ultimately pairing the two fastest riders against each other. Red Bull Straight Rhythm attracts top talent from the supercross / motocross world in both the 250 and 450 classes and requires a keen eye on form and technique to prevail on the incredibly challenging and technical course.

Racing for Alta will be Josh Hill, former pro supercross racer. Hill stormed onto the supercross scene in 2006, and was quickly picked up by Yamaha to join their factory team. Banging bars and mixing it up with the top riders in the field, Hill found himself taking up a residence on the podium and impressing audiences and sponsors alike. While Hill was set to continue being a rising star, a string of serious injuries forced his ultimate early retirement from the sport. After transitioning to his current position at Monster, Hill has established himself as an icon and influencer in the sport. 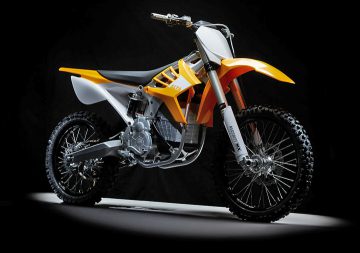 “This event is going to be a great test for the Redshift” said Derek Dorresteyn Co-Founder and CTO of Alta Motors. “We’ve taken a stock Redshift off the line and made some pretty trick upgrades to match Josh’s riding style, and we believe we will be competitive with the 250-class gas bikes.”

Alta has been ramping up their racing program and seeks another success to go with the their recent national win at round 4 of the EnduroCross series.

Red Bull Straight Rhythm will return to Fairplex in Pomona on October 22 for the event’s third consecutive year, boasting a revised format where practice, qualifying and racing will all take place on the same day, with the finals at night under the lights. With over 10,000 grandstand seats, plus an infield, spectators will be treated to a one-of-a-kind experience while watching an all-out, head-to-head sprint to the finish line. For those that can’t make it to the event, Straight Rhythm will air as part of the Red Bull Signature Series live October 22 on Red Bull TV and as a 90-minute highlight program November 27 on NBC.

About Alta Motors:
Alta Motors was founded in 2010 with the goal of building a better motorcycle. With a clean sheet and patented design, Alta’s team of 50 has built a groundbreaking electric drivetrain that provides instant torque, selective mapping and a level of control that is unparalleled in its gas equivalents. Putting down over 500 ft-lbs of torque at the rear wheel from 0 RPM and 40 peak horsepower, the Redshift MX and the Redshift SM are designed to offer class-leading control and rideability and by doing so elevate any rider’s experience. The company website can be viewed at www.altamotors.co.