Honda’s 2017 CRF250R has been a perennial contender that has come up just shy of its peers when in the engine performance and suspension departments. With an all-new, electric-start, DOHC engine and a chassis layout that mimics the 2018 CRF450R, the 2018 CRF250R is poised to make a serious run at 250cc motocross class honors.

Although Honda showed the American moto press the CRF250R while we visited the GEICO Honda motocross shop in Corona, California, two weeks ago, Honda swore us to secrecy until it could officially unveil the 2018 CRF250R to the world today at the 36th Annual Rocky Mountain ATV/MC AMA Amateur National Motocross Championship, presented by Lucas Oil.

Here’s an excerpt from the company press release:

“We’re excited to show this all-new, no-compromise model to our customers, and it’s appropriate that we do so with our family of Red Rider amateur motocrossers here at Loretta Lynn’s,” said Lee Edmunds, American Honda’s Manager of Motorcycle Marketing Communications. “The CRF450R has become the top-selling 450cc motocross model, and now that the CRF250R shares many of the same performance-focused updates, we’re confident it will enjoy similar success in the market and on racetracks everywhere.”

Honda is really hoping that the 2018 CRF250R will give the flat motocross motorcycle market a nice shot in the arm. According to Honda officials, the entire 2016 motocross market was down just under 1 percent while the 250cc four-stroke motocross segment was down 8.5 percent and Honda CRF250R sales have been down a whopping 26.9 percent to this point in 2017. Part of that low number may have to do with the buzz created when a pre-production version of the 2018 CRF250R broke cover at round three of the All-Japan MX Series, scoring a 1-1 sweep of the IA2 (250cc) class with rider Takeshi Katsuya. It signaled that a new CRF250R was on the horizon. Now it’s here, and it looks impressive.

Engine
The 2018 CRF250R’s clean-sheet approach does away with Honda’s Unicam four-valve engine design, which will remain in use on the CRF450R for the time being. To achieve maximum power levels at high rpm, the 250R’s 249.5cc engine boasts a double overhead cams and a new cylinder head that features a 1-degree narrower included angle than the 21.5-degree angle of the 2017 and larger titanium valves (33mm intake and 26mm exhaust instead of 30.5mm intake and 25mm exhaust). To help the engine breathe more efficiently the camshaft lobes deliver more valve lift on both the intake and exhaust sides, 10.5mm vs. 9.2mm on the intake and 9.5mm vs, 8.4mm on the exhaust. F1-style finger follower rocker arms are used for greater valve train stability with the higher lift cams. Like the 2017-18 CRF450R, the CRF250R also uses the valve springs with oval cross-section coils to help keep engine height as low as possible for better mass centralization. Honda engineers also relocated the cam chain to the other side of the engine; it’s now located on the right.

The 2018 engine also features a much larger bore and shorter stroke than the previous Unicam engine—79mm x 50.9mm compared to the 2017’s 76.mm x 53.8mm. Pretty much a standard in the industry nowadays, a bridge-box piston is located in the CRF250R’s cylinder that now has a 4.5mm offset rather than a 4mm offset. The CRF250R the first production Honda engine to utilize the proven piston design. A new crankshaft with an H-shape cross section reduces reciprocating weight by 350 grams without—says Honda—sacrificing crankshaft rigidity. A larger oil jet is also used in an effort to cool the underside of the piston more efficiently.

And, speaking of oil, the 2018 engine also gets a completely redesigned oiling system with a new scavenging pump that maintains negative pressure more effectively in order to reduce pumping loss and friction at the high rpm where the engine is designed to work best. The oil passages are shaped to provide a simpler and shorter path as the oil circulates through the engine. There’s also less oil in the engine than before, as the 2018 CRF250R does away with the separate engine oil/transmission oil compartments, allowing a reduction in engine oil capacity from 1600cc down do 1250cc. The oil pump, drive gear and filter are now located on the right side of the engine rather than on the left.

Honda didn’t feel the need to change the 2018 CRF250R’s throttle body size. A 46mm Keihin throttle body is still part of PGM-FI fuel-injection system, but the entire intake layout uses the same downdraft design introduced on the 2017 CRF450R. The benefit is that the incoming fuel charge gets a much straighter and more symmetrical shot into the combustion chamber than previous Honda designs for better throttle response and easier power production. The CRF250R’s ECU retains Honda’s excellent-working Engine Mode Select system, which allows for virtually on-the-fly engine mapping changes by simply pushing a button mounted on the left-side handlebar. It allows the rider to choose from among three fuel-injection maps: Standard, Smooth, Aggressive to match the terrain and/or rider preference. The system’s Smooth and Aggressive modes can also be re-mapped using Honda software and a laptop computer. 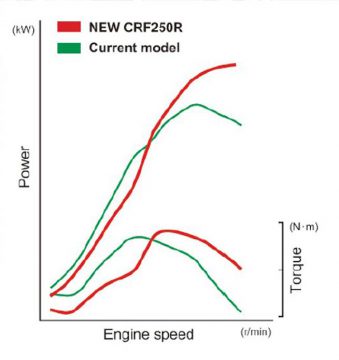 The CRF250R also features a new electric starter powered by a small, lightweight lithium-iron phosphate battery, same as the CRF450R. The design eliminates the need for a kickstarter.

The end result of all of these changes is expected to be a CRF250R that offers superior acceleration and much improved top-end performance.

Clutch/Transmission
Honda also redesigned the 2018 CRF250R clutch and five-speed transmission. The new clutch still features coil springs, but it features clutch plates that use two friction materials instead of one. The gears in the transmission feature entirely different ratios than the 2017 CRF250R, and the whole works shave an additional 200 grams from the power train.

Chassis
We loved the slim, quick-handling aluminum perimeter chassis that Honda designed for the 2017 CRF450R (and now 2018 CRF450R), and since the 2018 CRF250R chassis is identical, it’s hard to imagine that our minds will be changed. The new-for-the-250 frame is intended to incorporate the same slim and low layout of the CRF450R and deliver better drive off the starting gate and out of corners while retaining high-speed stability. The new main spars are tapered and feature more gradual bends to offer better flex characteristics than the old ones, and the aft section places the rear shock 39mm lower in the chassis than before for better mass centralization. A new subframe has also been lightened by 20 percent via the use of an extruded rather than forged rear section. A shorter and narrower swingarm also shaves 220 grams from the chassis while placing more weight on the rear end. Like the CRF450R, the 2018 CRF250R also gets a 1.6-gallon titanium fuel tank to help lower the center of gravity even further, According to Honda, the chassis numbers break down as follows: 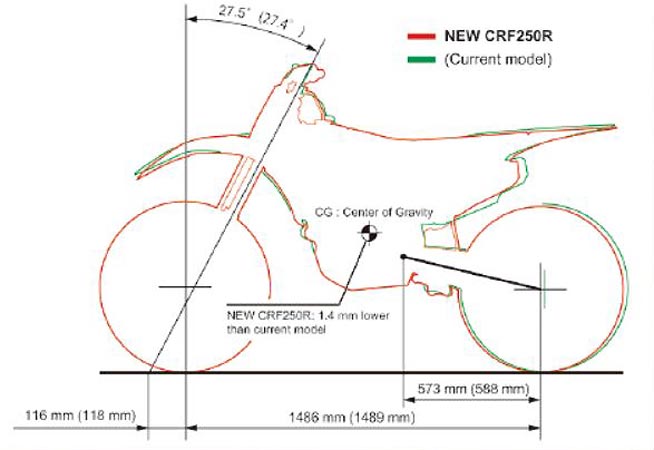 Even though some of DirtBikes.com test crew didn’t curse the previous-gen CRF250R’s 49mm inverted Showa SFF-Air fork as much as other air fork designs on the market, the fact that Honda has ditched it in favor of a 49mm Showa SPG coil spring fork doesn’t hurt our feelings one bit. We praised that fork during our 2017 450cc Motocross Shootout, and there’s no reason to be suspect of its performance on the CRF250R. The kit uses a productionized version of Showa’s A-Kit race suspension—which means no trick coatings—to help deliver what we’re confident will be a plush and controlled 12 inches of front suspension travel. Out back, a fully adjustable Showa single shock is connected to Honda’s trademark Pro-Link rising rate rear suspension linkage to produce 12.4 in. travel.

The 2018 CRF250R’s brake and tire spec is about the only thing that hasn’t really changed all that much from the 2017. The wave-style front rotor still measures 260mm and is clamped by a Nissin two-piston rotor, while the rear is a 240mm wave-style unit with a Nissin single-piston caliper. Dunlop is still the OEM tire supplier for the CRF250R, although Dunlop Geomax MX3S 80/100-21 front and 120/90-19 rear tires replace the MX51s found on the 2017.

Of course, the 2018 CRF250R is nothing like the 2017 model, and you also won’t mistake the one for the other at the track. The ’18 boasts smoother, more compact bodywork that is designed to not only help slim up the look of the bike and improve ergonomics, it’s also designed to be more aerodynamic and to provide more efficient airflow into the CRF’s compact dual radiators. To keep the CRF250R looking fresh for a longer amount of time, the graphics are of the in-mold variety.

Honda has not yet set an MSRP for the 2018 CRF250R, but we expect it to be in dealerships this fall. For more information, check out www.powersports.honda.com. 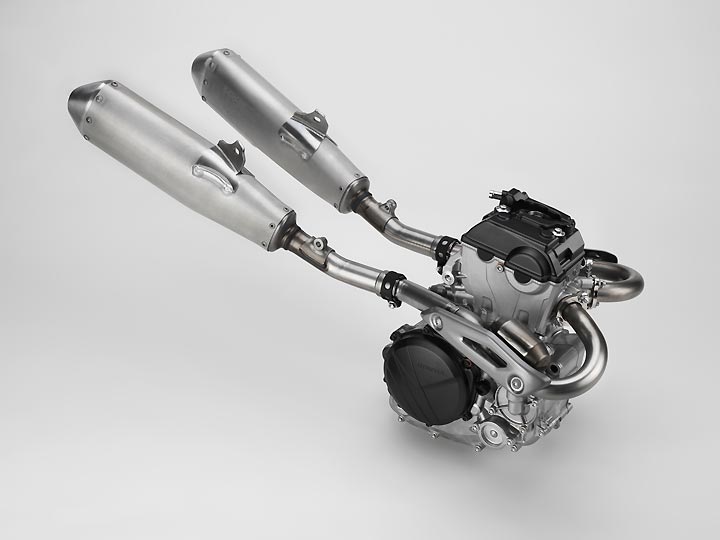