Are we the only ones who wish that one of the Japanese manufacturers still offered a 500cc two-stroke such as Honda’s potent, class-conquering CR500R of days gone by? 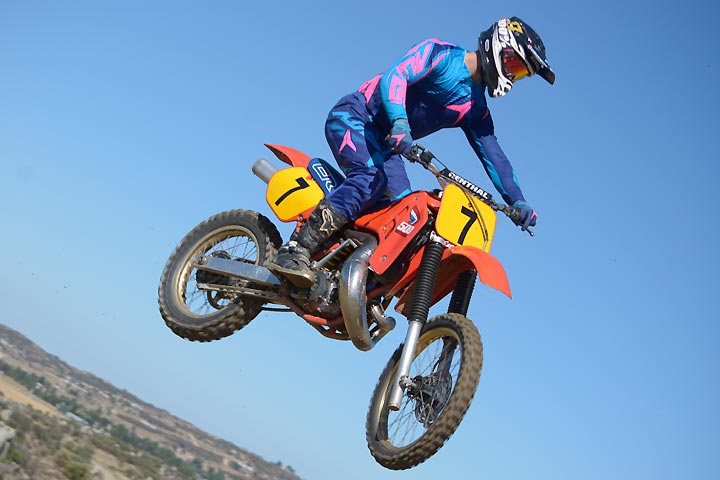 Despite the fact that Honda hasn’t produced a CR500R since 2001, we still see them pop up from time to time. In fact, we recently marveled as an unidentified dirtbike enthusiasts put his 1986 Honda CR500R (above photo) through its paces at Cahuilla Creek MX while we were out testing a few project bikes. There’s simply no mistaking an open-class two-stroke for a 250 out on the track, as its throaty exhaust note and penchant for rearranging the topography whenever the throttle is mashed are still sensations to behold.

Recently, in England, British motocrosser Nev Bradshaw was looking for the ultimate buzz, so he elected to race his 1989 Honda CR500R at the iconic Foxhills track in England for the last round of the British Two-Stroke Championship. You can watch the video, found on 999lazer’s YouTube channel to see Bradshaw in action.

Although Honda built RC500 works bikes as early as 1976, the first production Honda open-classer, the CRF450R didn’t make it into dealer showrooms until 1981. That bike, frankly, was enough of a disappointment that legendary dirtbike scribe Rick “Super Hunky” Sieman gleefully pans it as one of his 10 Worst DirtBikes in History feature on DirtBikes.com. Honda completely redesigned the bike for 1982, producing the four-speed CR480R, which was updated again with a five-speed transmission to produce the 1983 CR480R, arguably one of the best air-cooled open-class two-strokes of all time.

The first Honda CR designated as a 500 came along in 1984, but a poor combustion chamber design made that model prone to pinging, forcing owners to add a head gasket in order to lower the compression ratio enough so that the engine could live on pump gasoline. In 1985, however, Honda introduced the first liquid-cooled CR500R, with a 491cc engine that made 52.8HP, making it the most powerful production motocross bike that Honda had ever produced. The CR500R continued in Honda’s motocross lineup through 2001. By then, Honda was enjoying great success with its Unicam four-stroke CRF450R.

One might expect that the CR500R would gently fade into history, but there are numerous diehard riders who continue to ride CR500R models everywhere from the desert to the woods to evolution- and sportsman-class motocross events. If someone fires up a CR500R in the pits at your local riding venue, you’ll know it.

The video below is a brief history of the Honda CR500R, taken from the Opferman Motors Dirtbiking YouTube channel: