Before we start our Honda CRF125F vs. Yamaha TT-R125LE comparison, we just have to say that if you ever see a Honda or Yamaha representative at a motorcycle event, make sure to tell them to thank their respective company for building them.

These diminutive thumpers represent a whole lot more than gateway machines for budding dirtbike enthusiasts. Their stone-reliable air-cooled four-stroke technology, which features good old-fashioned carburetion has been unchanged for decades. Ditto for their steel chassis and other non-exotic materials such as steel rims and drum rear brakes. Their tooling has long been paid for, which means that they deliver a higher profit margin for the manufacturer, which helps to defray the extensive R&D costs associated with the cutting-edge motocross off-road machines in Honda’s CRF and Yamaha YZ/WR four-stroke lines.

But just because playbikes such as the CRF125F and the TTR-125LE are comparatively unsophisticated doesn’t mean that they’re boring. Quite the opposite, they’re true multi-purpose tools that are capable of providing fun for the whole family, regardless of the rider’s age or skill level, and they’re motocross bike-inspired styling makes them attractive additions to anyone’s garage.

DirtBikes.com wanted to revisit some of these playbikes, and our plan was to grab a horse apiece from the four Japanese OEMs for our little comparison, but that couldn’t happen because neither Suzuki nor Kawasaki had models available in their test fleet. Oh well, it happens. Even so, we didn’t want to give up on our plans to explore the low-pressure, fun side of dirtbiking that the CRF125F and TT-R125LE offer.

But to do it right, we needed the opinion of more than just an adult. We wanted a seasoned kid to swing a leg over these machines and tell us what he thought. DirtBikes.com test rider Nic Garvin runs a training school for aspiring motocross and off-road riders as a side business, so we tapped him to recruit a youngster for our test, and he came up with a real diamond in 10-year-old Jett Lessing from East Vale, California. Young Jett is already an accomplished desert racer, having won the 2016 Rocky Mountain ATV/MC WORCS 65cc B championship (seriously beating up on the 65cc A riders in the process), and if things keep going his way he will earn the AMA District 37 Big Grand Prix title in the same class. He was also recently selected to be on the first 65cc team to tackle the notoriously difficult 24 Hours of Glen Helen. Lessing and his Zip-Ty Racing teammates Dustyn Davis, Preston Boespflug, Brennen Watson, Reese Monte and Trysttun Alvarez not only finished the race, they wound up 31st overall.

The thing is, Lessing is on the small side for his age, a super-fast 10-year-old currently stuck in the body of an 8-year-old. That presented some challenges for our photo shoot as the 30+-inch seat heights of our two test units were too much for him to be able to touch the ground. Simple enough: One of our crew was always there to catch him whenever he came to a stop. As long as he kept moving, he was hell on wheels.

From the moment young Lessing climbed aboard either of the two machines, you could see the grin under his helmet. “These bikes are fun!” he proclaimed, and indeed they are. Whether you are a first-time rider or an adult expert such as Garvin, both the CRF125F and the TTR-125L are sure to put a smile on your face.

As we said, both bikes rely on carbureted, air-cooled, SOHC, two-valve, four-stroke singles with manual clutches for motivation. Both feature the convenience of electric-start but also include kickstarters—just in case, and both sport 19-inch front and 16-inch rear wheels stopped by disc brakes up front and drum brakes out back. Both of these machines are also EPA-legal and are fitted with US Forestry-approved spark arrestors, allowing them to be ridden on designated public land. Yet, there are notable differences between the two machines as well, and our test crew did come to a unanimous decision about which on it favored more.

The CRF125F’s 124.9cc is achieved via a long-stroke engine, with the bore and stroke measuring 52.4mm x 57.9mm and a pump gas-friendly 9.0:1 compression ratio. Right away we noticed how dialed-in the CRF’s 20mm Keihin carburetor is tuned as the bike takes very little time to warm up when cold and throttle response is cleaner and crisper than the TTR-125LE’s. The CRF is definitely tuned for low-end grunt, but its output is silky smooth and unintimidating, a boon for first-time riders. Its power is transmitted through a manual clutch to a four-speed gearbox with a silky shift action.

The TT-R 125LE’s engine measures 124cc as well, but Yamaha went with a perfectly square 54.0mm x 54.0mm bore and stroke, and the TT-R125LE’s compression ratio is also one point higher than the CRF’s, 10.0:1. Fueling is handled by a 20mm Mikuni carburetor that is a lot more cold-blooded than the Honda’s. The TT-R took quite a bit longer to warm up after a cold start taking quite a bit longer to warm up than the CRF125F. Even after it was warm, the TTR-125LE’s throttle response was noticeably softer than the CRF125F’s.

However, once underway, it is hard not to notice just how much more torquey and linear the TTR-125LE is than the CRF125F. Despite its mushier throttle response, the Yamaha outshines the Honda with just a little more oomph through all of its gears, and the blue bike inches away from the red bike on the top-end from gear to gear. The Honda feels linear enough, but its power thins out considerably at the high end of the rev range. Both engines are extremely tractable.

The CRF’s manual clutch and four-speed transmission are pretty much what we’ve come to expect from Honda in terms of performance, which is to say pretty much flawless. Its clutch engagement is smooth and linear, with plenty of range in the friction zone, and shifting is effortless. Again, this is less likely to intimidate beginners. The only gripe we had was that the CRF’s first gear is extremely low, which is great when you’re crawling a long but, otherwise, not so much. However, at least initially, young Jett pronounced that he liked the way the Honda’s engine performed and how easily it shifted.

By contrast, the Yamaha’s clutch has a narrower engagement and feels considerably more grabby than the Honda’s. The Yamaha’s transmission is also very smooth from gear to gear, although not as smooth as the Honda’s. But the Yamaha also brings a little more value by virtue of the fact that it is a five-speed transmission compared to the Honda’s four-speed. That added flexibility helps the Yamaha to stay in the sweet spot of its power a little easier as well, and that’s likely to make it a little more fun as a rider’s skill level progresses.

We didn’t bother to dyno these two “powerhouse” engines, at least not in the conventional manner, but since our test day took place at Glen Helen Raceway, we had a decent makeshift dyno in the form of the legendary Mount St. Helen, the 400-foot climb that is part of the facility’s AMA National Motocross track. Garvin took to the hill on both bikes. He was able to clear the top of Mount St. Helen on the Yamaha, but he came up short on the Honda. Later, however, Garvin’s 24-Hour teammate, Nick Stover, cleared the top of the mountain on the Honda; it just took him a lot longer to get there as he had to rely on the CRF’s tractor-like low gear.

Handling is one area where our two little thumpers dueled to an absolute draw. There is nothing to dislike about either machine as both feature steel backbone chassis that offer light and easy steering along with plenty of stability for their speed range. The Yamaha rides on a slightly longer wheelbase than the Honda, 50.0 inches vs. 49.4 inches, its 28.7° is just a tad more slack than the Honda’s 27°30′ (minutes) rake. Both bikes feature 3.7 inches of trail. The CRF and the TT-R will go where you point them with no surprises. With a claimed curb weight of 198 pounds, the Yamaha is four pounds heavier than the Honda, although the weight difference wasn’t noticeable. Neither bike feels anything close to what we would consider as “heavy.”

The suspension department is one area where these two playbikes separate a little bit again. The CRF125F sports a nonadjustable 31mm leading axle front fork and tried-and-true version of Honda’s Pro-Link rising rate linkage rear suspension with a preload adjustable shock. Suspension travel at both ends is 5.9 inches. The TT-R125LE’s 31mm telescopic front fork and linked rear shock deliver more travel, 7.1 inches up front and 6.6 inches out back as well as the added benefit of preload adjustability in the fork and full adjustability for preload, compression damping and rebound damping in the shock.

Watching Jett tackle the jumps on the vet-styled REM track at Glen Helen, it was apparent that the Yamaha’s additional travel serves it well, as it is far more plush than the Honda’s, a position backed by Garvin’s seat-of-the-pants testing. The CRF has less travel, and it’s stiffer than the Yamaha, front and rear.

Like their handing, braking of both machines is more than adequate. Both feature 220mm disc brakes with two-piston calipers up front, but the Yamaha has a slightly larger rear drum out back, measuring 110mm vs. 95mm for the Honda. Did it matter? Not really. The CRF125F and the TT-R125LE offer confidence inspiring power and a linear feel at both ends, another plus for new riders.

All of our testers, young and old, big and small, preferred the Yamaha’s ergonomics over the Honda’s. When you’re dealing with smaller machines, every millimeter of space in the ergonomic triangle counts, and the Yamaha simply feels roomier than the Honda. On the other hand, smaller riders might appreciate the Honda’s slightly shorter 30.9-inch seat height compared to the Yamaha’s 31.7-inch seat height. That “almost an inch” could mean all the difference if you don’t have Jett’s dad, Garvin or someone else to catch you when you are coming to a stop.

One other small detail we noticed on the two machines had to do with their chain adjustment mechanisms. The Honda CRF125F features the more common nut-and-thread adjusters to help maintain proper chain slack whereas the TTR-125LE uses snail adjusters. We’ve always liked snail adjusters for their ease of use and because you don’t need a wrench to turn them once the wheel is loose.

That’s a small detail, but the difference between these machines is often small though significant. Considering that both of them retail for $3299, it the details that helped us to choose a winner even though we fell in love with both the Honda CRF125F and the Yamaha TT-R125LE. There’s no question in our minds that the Honda carburets more cleanly than the Yamaha, and the Honda’s clutch and transmission action are smoother. However, the Yamaha’s slightly better torque spread, fifth gear, and plusher, more adjustable suspension add real value to the package.

At the end of the day, our feelings on these two machines could best be summed up by the newest member of our test team, Jett Lessing. A man of few words, when grilled about the nuances of both machines, he simply responded, “I like both of these bikes a lot, but I like the Yamaha a little better.” 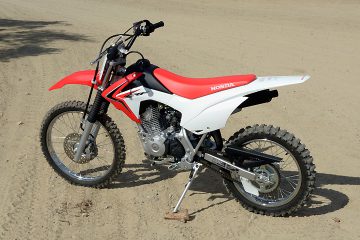 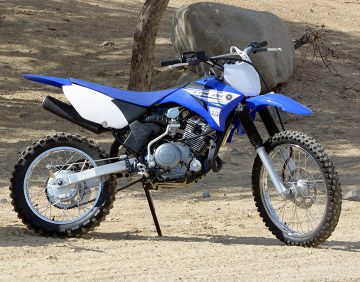