Changing a tire can be one of the nastiest periodic maintenance jobs one can do when servicing a dirtbike. The process has been known to cause pinched fingers, bloody knuckles and a seemingly endless swarm of curse words to be spoken.

But maybe that’s just because you’re doing it wrong.

Jay Clark of Jay Clark Enterprises knows how to do it right. In addition to running his own custom dirtbike-building company, Clark supplements the bottom line by working with Dunlop to provide tire service at a number of races where the tire giant provides pit service. As such, Clark has gotten very good at changing tires, manually, without the aid of one those fancy electric-powered tire machines that your local dealer uses when he charges you $30 to change a tire. And you can too.

“The biggest problem for most people is that they don’t change tires often enough,” Clark said. “A lot of guys are only doing it two or three times a year. It’s like anything in life. It isn’t difficult if you do it enough to get your technique down pat.”

Doing it often enough to stay sharp on your technique is one thing, but having the proper tools is equally critical. In other words, long flathead screwdrivers do not make for proper tire spoons!

“A bike stand also helps a lot,” Clark said. “You don’t want to be changing your tire on the ground, and even using a barrel [as a stand] can make the job more difficult. So, use a proper stand and the proper tools. You can see in the video how some of the products from Motion Pro are also a big help when it comes to changing a tire.”

One of the things that we’ve found makes tire changing extremely difficult is a failure to ensure the bead is broken on both sides of the rim and that the lip of the tire is as close to the center of the rim as possible. Get it wrong and the job becomes all but impossible. In fact, we’ve seen examples of tires that were effectively ruined when the lip of the tire was torn by the excessive force of an overzealous shade-tree mechanic. Watch the video and you will not see Clark straining in any way as he dismounts the old tire and mounts a new tire to the rim. The rule of thumb here is that if it seems like you are straining to get the lip of the tire over the edge of the rim, step back and take a moment to assess the situation because something is wrong.

“That’s why I preach using small bites rather than large ones when working the lip of the tire with the tire spoons,” Clark said. “If you watch the video you will even see that I take the time to knock the tire down before I take those last few bites.” 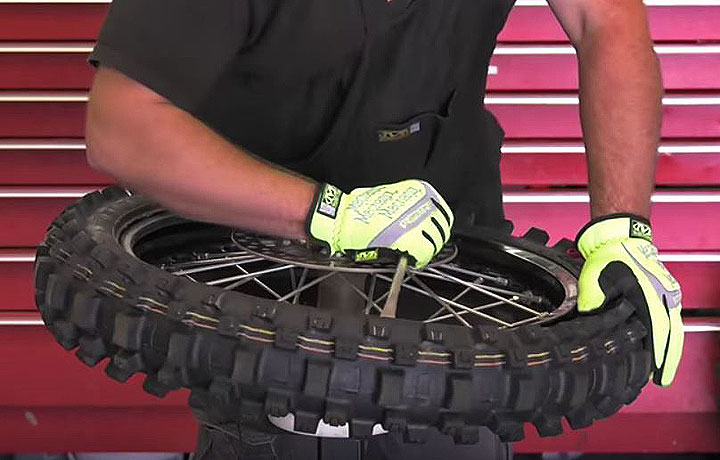 To sum it up, Clark said, most of us make the tire changing process much harder than it needs to be, but using Clark’s tried-and-true techniques, it doesn’t have to be an exercise in frustration.

“I tell people to just take their time,” Clark said. “And I’ve had people come up to me and tell me that they’ve watched one of my videos, paused it and watched it again, and eventually they catch on to how easy it is.”

Of course, that doesn’t mean that they liked doing it.