The Wilvo Nestaan Husqvarna team and Russian rider Aleksandr Tonkov get a factory fresh machine for the championship chase, starting in Italy.

Tonkov is set to race the GP of Trentino at the Arco Circuit in Pietramurata, Italy, aboard the new bike, and he will continue to race it for the rest of the series. It is no secret that Husqvarna currently follows the development of sister brand KTM’s Factory Editions, with the orange machines debuting the latest technology that is then filtered to Husqvarna. That’s most likely the case here, only instead of waiting for a year, the Wilvo Nestaan Husqvarna team will benefit from the latest breakthroughs now rather than in a year’s time. 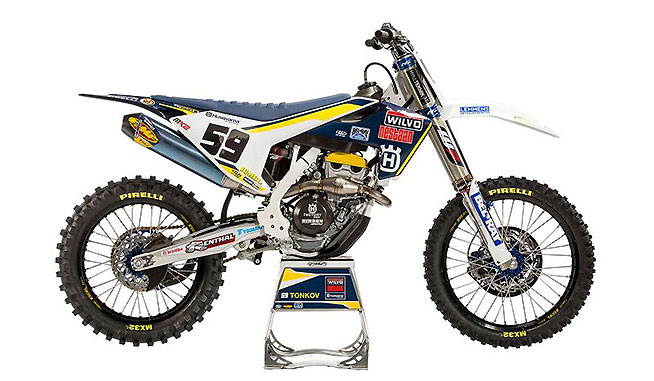 Here’s what Husqvarna had to say about the new machine in its official release:

As part of the continuous development within Husqvarna’s motorsport department, the new FC 250 machine showcases a totally new design. Improved in every detail, the new bike has numerous benefits. Lighter, slimmer, with reduced mass within the engine and featuring redesigned bodywork, Husqvarna will maximize their position at the sharp end of the results.

Focusing on the chassis, technicians have developed a new, cutting-edge frame. Lighter and stronger than the previous model, the frame design improves torsional rigidity and decreases longitudinal stiffness. The result is better flexibility and feedback to the rider.

The engine features extensive improvements. A fresh design has improved centralised mass and performance. A new fuel injection system and new battery ensures Husqvarna’s MX2 factory bike will be even more competitive on the racetrack.

Totally redesigning the bodywork and plastics from the ground up, the smoother lines and more compact design ensure the bike is as slim as possible.

Robert Jonas, head of Husqvarna Motorsports said that everyone within Husqvarna’s motorsport department is truly excited by the opportunity to compete with a completely new motorcycle in this early stage of only its second season of racing.

“The new 250cc factory bike is lighter, more powerful, and very easy to handle,” he said. “This offers us a great technical base from which we hope to go on and win championships.”