See what factory Hard Enduro legend Graham Jarvis can do with his Husqvarna TE 300.

If you’ve been following the butt-kicking sub-genre of off-road racing known as hard enduro, then Graham Jarvis needs no introduction.

A former World Trials Championship contender and Scottish Six Day Trial Champion, the 39-year-old Englishman is a four-time winner of the prestigious Red Bull Romaniacs hard enduro, and the defending champion of the Hell’s Gate hard enduro. He gave the Bel Ray Husqvarna Extreme Factory Team its first Hard Enduro victory at the Roof Of Africa in Lesotho, South Africa, in November of 2013. Recently, Jarvis just missed out on claiming a record fifth Red Bull Romaniacs title. He is a rather quiet and polite character, which belies the bull-dogged riding style that has seen him become recognized as one of the top two Hard Enduro riders in the world. In the world of motorcycle racing, Jarvis’ battles with countryman Johnny Walker deserve a recognition akin to the Muhammed Ali/Joe Frazier heavyweight boxing battles of the 1970s.

To celebrate Jarvis legendary status among the most extreme off-road pilots in the world, Husqvarna has released this video. Jarvis is aboard a Husqvarna TE 300. Enjoy! 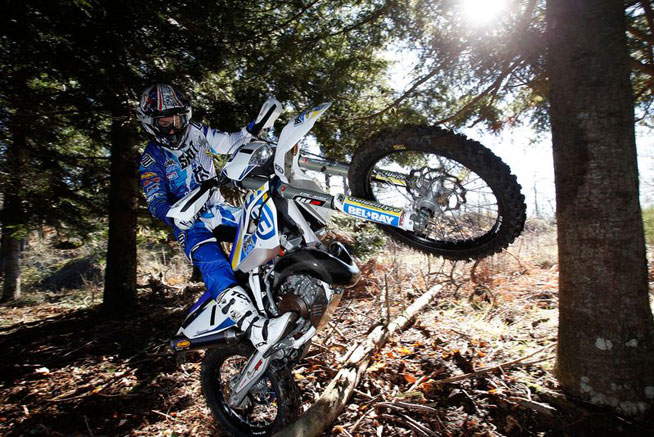