The Husky World Championships have been a long time coming – over 50 years to be precise. Husqvarna has been the icon of off-road racing on two wheels, and was the emblem of the golden era of motorcycling, yet there has never been a dedicated event for Husqvarna motorcycles. Until now.

Cahuilla Creek MX was host to the inaugural Husky World Championships on March 4-5, a motocross event that saw motorcycles old and new, vintage and cutting-edge, take to the track for a weekend of fun, competition, camaraderie and the shared passion for the Swedish-born brand that introduced motocross to America.

The event was the brainchild of Brian Catterson, vintage motocross enthusiast and former editor of Motorcyclist magazine. Catterson envisioned a race not unlike the CZ World Championships, but for the venerated Husky brand. Fortunately, the promoter of the annual CZ event was there to cheer him on in creating the event–one he maintains was well overdue.

“Husqvarna is one of the most, if not the most iconic motorcycles in off-road racing today, clear back to the early 60’s,” commented Robin Hannah. “It’s about time they got this. When we started [the CZ World Championship] up north in Sacramento area, we had 17 bikes and 37 entries. So for him to have this big a turnout his first rattle out of the bag is really a testament to his tenacity and his connections within the motorcycle industry and I’m very proud of him.”

For someone who claims he’s “not a race promoter,” Catterson did a pretty good impression of one in pulling off the event. Through the support of Husqvarna Motorcycles North America and other sponsors, he was able to see his Husky World Championships dream realized. Nearly 100 race entries enjoyed the rolling jumps and sweeping course of the Cahuilla Creek vet track. Conditions, albeit a little cold and windy, were ideal with “chocolate cake” dirt and excellent traction—a treat for bikes of any generation.

Several Husqvarna “legends” were in attendance including Tom White, who brought along a couple of his vintage Husky treasures to have on display. White served as the emcee at the event, also announcing the races alongside Dave Brosius. AMA Motorcycle Hall of Famer Gunnar Lindstrom, one of the early pioneers of Husqvarna who helped usher in the brand to the North American market, was also on hand. Lindstrom was eager to be a part of the event from the moment he heard of the idea, and also brought out several of his old Huskys–some for show and some for racing.

“We are so thankful for the new factory in Austria to revive the brand like they have, and so successfully,” Lindstrom said. “This just follows on the heels of that. I was not on board from the beginning, but when I heard about it, I was fully supportive and offered my help. It’s good for the brand, it’s good for the people it’s good for everybody.”

The CALVMX crew also lent a hand to the Husky World Championships by offering their vintage racing expertise and running the ground operations. Everything ran like clockwork between the finish line and the start.

“They like to say they run the thing like a carrier deck, and they did,” Catterson remarked. “They did a great job with that.”

Vintage racers came from around the world—quite literally–coming from as far away as England for the event. But the unique thing about the Husky World Championship wasn’t the vintage quality–rather it was the juxtaposition of old and new, 2017s alongside 1971s, 70-year-olds and 7-year-olds on the same track, enjoying motocross in all stages of its evolution at one event. For a brand that prides itself on heritage, there is no better platform.

“It’s such a great event to bring together vintage customers with some of our brand new Husqvarna customers,” said John Hinz, president of Husqvarna Motorcycles North America. “It’s a great opportunity to come out here and share the sport with fans, customers, riders and racers.”

Hinz, himself, spent the day racing alongside the fans and heroes of Husky history. But for him, modern was the only way to go.

“No vintage bikes for me,” Hinz said with a laugh. “I was all modern! I had a 2017 FC 250 today. We had some fun out there and enjoyed chatting about old motocross memories and making some new ones.”

The highest honor of the day went to Mark Blackwell, who was presented with the inaugural Husky World Championships Lifetime Achievement Award. Blackwell, also an AMA Motorcycle Hall of Famer, is a former Husqvarna factory racer, and was also the head of Husqvarna Motorcycles in the U.S. for a time. Blackwell still consults with Husqvarna today, and remains ever proud of the innovative and resilient brand that introduced motocross to America.

In the end, the event was a measured success. Catterson and company were quite pleased by the reception and the appreciation showed by all in attendance. They now look forward to the second annual Husky World Championship, but for the immediate future, Catterson’s goals remain a bit simpler.

When asked for his closing thoughts, he simply commented, “I need a beer. And a nap.” 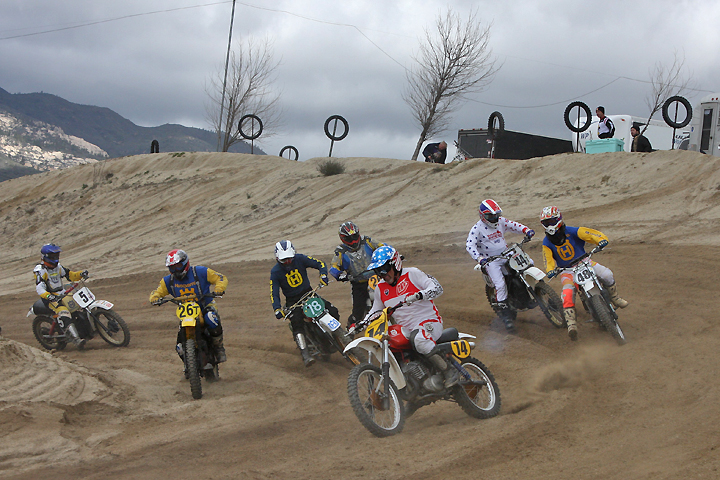