It almost kind of pisses us off. Almost.

For years we watched Polaris Industries build its awesome Outlaw competition ATV and prayed for the day when the company would offer us one, just one, two-wheeled off-road competition machine. Now, under the hallowed Indian brand that Polaris has revived to its former glory over the past three years, the company has finally built an awesome dirt machine, although not the one we expected.

Names don’t matter. What does matter is that in a little over nine months, Indian has designed, created and successfully debuted a kick-ass V-twin flat track racer that infuses modern technology with old-school “windage,” the latter used by Harley-Davidson’s XR750 to dominate the American flat track scene with few interruptions for the past 46 years.

The Indian Scout FTR750 was designed and built to be able to claw through slippery clay corners on the miles and half miles that dominate the venerable American Flat Track Series while also delivering high-rpm thrust as it easily winds past 10,000 rpm. Blending the former and the latter isn’t the easiest task. Consider that even in the four years that it dominated the American Flat Track Series, Honda’s titanic RS750 still struggled when the going got slippery. The long-stroke Harley-Davidson XR750 simply puts the power to the ground better. With the Scout FTR750, Indian has worked feverishly to change that. 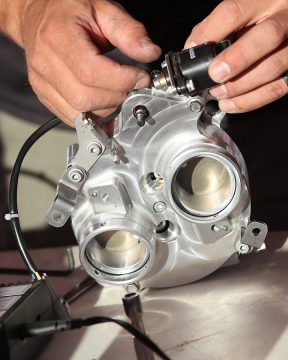 Going from drawing board to racetrack testing in little more than six months, Indian partnered with its own MotoGP engineering firm, Swissauto, to devise a 53-degree V-twin with a large 88mm bore and a short 61.5mm stroke. The engine features double overhead cams and four valves per cylinder, not groundbreaking by any stretch, but a damn site more state-of-the-art than the pushrod-actuated two-valves-per-cylinder XR750. The Indian is also liquid-cooled, which allows it to keep from detonating under the combustion generated by its speedway bike-like 14.0:1 compression ratio. It also takes advantage of fuel-injection and a modern ECU that allows for plug-and-play tuning to dial-in power output for track conditions. The entire engine weighs a mere 106 lbs.—pretty light for a V-twin engine. The Scout FTR750 breathes through twin 38mm throttle bodies housed in a single billet aluminum unit.

The net result is an engine that initially made an easy 120 horsepower, and that’s good and bad. It’s good because it shows just how capable the Scout FTR750 engine can be but bad because putting that much power through the rather antiquated Dunlop dirt track spec rear tires originally designed to handle about 70 horsepower is a quick way to Shredsville. During summer testing, Indian was constantly having to detune the Scout FTR750 to the point that it now puts out a smooth and linear 110 horsepower.

Well ahead of its testing schedule, Indian decided to unzip its fly and debut the Scout FTR750 at the 2016 AMA Pro Flat Track season finale, the Ramspur Winery Santa Rosa Mile in Northern California on September 25. Indian was confident that the Scout was ready, and to make sure that it had a good rider for the bike, it hired none other than 2000 AMA Pro Flat Track Champion Joe Kopp to pilot it. Kopp not only qualified the machine well, he impressed flat track’s diehard fans by not only finishing second in his heat race to pit it into the main event and then won the Dash for Cash to sit on the pole for the big race. A solid seventh-place finish in the main—a Harley won the race—showed that Indian is very much ready to play.

On top of that, Indian made a bombshell announcement when it confirmed that it has hired arguably the three best dirt track riders in the world, newly crowned AMA Flat Track Champion Bryan Smith and former champions Jared Mees and Brad Baker to form its new “Indian Wrecking Crew.” Mees’ signing has been known for months, but the addition of Smith and Baker, the latter Harley-Davidson Factory Racing’s main man, equates to “piling on” in its purest form. It harkens back to a time when Indian stood proudly atop the sport by winning back-to-back-to-back National Championship titles in 1951, ’52 and ’53 with the mighty factory Indian Wrecking Crew of Bill Tuman, Bobby Hill and Ernie Beckman. Sadly Indian was forced to go out on top when it ceased production of its road-going Chief and Scout models in 1953.

But Indian is back now, and when our big sister site Motorcycle.com asked us to head up to Santa Rosa and accept Indian’s invitation to actually swing a leg over the Scout FTR750 on the day after the Santa Rosa Mile, we couldn’t get our bags packed fast enough. To make sure that a bona fide professional would be on hand to evaluate the machine properly, we enlisted seven-time AMA Pro Flat Track Champion Chris Carr to test the bike and offer his opinions on it.

Although he has seldom swung a leg over a 750cc twin since retiring from the series in 2011, it was clear that Carr still knows how to ride a V-twin flat tracker. The former champion had everyone’s attention as he roared around the chewed-up Santa Rosa Mile racetrack on the Scout FTR750. No different than any of the other guests taking part in the riding sessions, Carr was allowed just two three-lap runs on the Scout, but he was able to download a mountain of feedback. That’s why we drafted him for the job in the first place!

“Seat-of-the-pants power feel is that from way down low all the way to the top of the rpm range, the bike is just solid, and it didn’t make me cringe,” Carr said. “It has a very, very linear powerband. When it gets into the cam, it gets into the cam in a very mellow fashion. It isn’t overly aggressive, and that’s what you need for dirt. A lot of people put major focus on peak horsepower and high rpm, but the reality is that in dirt track you spend a very short period of time at that peak, and it is usually after the start/finish line. What you need is something that can run up to that range and is manageable. For 100-horsepower motorcycles riding around on 75-horsepower tires, sometimes too much is too much. I didn’t feel like this bike has too much. It has just enough in the right places.”

To watch and listen to the Indian, you wouldn’t think that to be the case. The Scout FTR750 has a sharp, biting exhaust note, and it spooled up so quickly when Carr got on the gas that it would lead one to believe that the bike’s rear tire spins uncontrollably. It doesn’t, says Carr, although even it did, the Indian/Swissauto team designed the engine to incorporate external flywheels that can be swapped out help tailor the engine’s hit and tractability as needed.

“No matter what, even when you spin up, it maintains a really good connection to the track,” Carr said. “That’s something that we as riders feel, and feel is something that you can’t teach. It is acquired over time. This bike felt like no matter how quickly it spun up, it wanted to stay hooked to the ground and go forward.”

One aspect of the bike that Carr wasn’t totally impressed with was its four-speed transmission. It wasn’t a matter of shifting performance or feel but rather the spacing of third and fourth gear.

“Third and fourth gear are pretty far apart, just about as far apart as you would find in a standard off-road motorcycle transmission,” Carr said. “My suggestion to them is that you need to have third and fourth gear closer together, within a tooth or so, because on oval tracks you want to make half-tooth or sometimes quarter-tooth adjustments. Tuners will have a lot more options at a rider’s disposal if you have the third and fourth gear ratios about one tooth apart [as measured by the rear sprocket in the final drive] on the gear chart. It’s a matter of being able to fine-tune the gearing for changing conditions.”

“We were on a very difficult racetrack, but the bike handled it with ease,” Carr said. “It feels a little stiff for me, but that was probably because I was evaluating it 80 percent rather than 100 percent. On an XR, you pretty much sit ‘down’ in the saddle. This bike feels tall, like you are sitting on top of a fence, but with the majority of today’s racers growing up on motocross-based bikes, this one feels right in between what a modern-day DTX bike and an old-school flat tracker feel like. It feels narrower through the middle than an XR, although you still feel some of the exhaust system on the left side, but you don’t have to wrap a leg over a carburetor [on the right side] like you do on an XR.”

At the end of the day, Carr came away impressed with the Indian Scout FTR750, so we asked him to give it a numerical rating from one 10, 10 being excellent and one…well…one being a number we’re pretty sure nobody would affix to the Indian effort at this point.

“If I had to rate it, I could only to it based on the track conditions here, my level of fitness and my age, but I would give it a solid eight of 10 right now,” Carr said. “But I would love to have ridden this bike 15 years ago on a racetrack that was better prepared. If so, that number would be higher.”

Still, that’s high praise from Carr, a dirt track legend who, in our experience, has never been easily impressed. It tells us that Indian has a real weapon to aim toward the American Flat Track Championship in 2017. Better yet, it received a legitimate stamp of approval from the last man to win the title on an Indian, Bill Tuman, the 1953 champion. Now 95, Tuman was on hand at Santa Rosa to witness Indian’s return to flat track racing, and he was impressed by what he saw.

“That thing is choice,” said Tuman, who was still winning big races on his Indian Scout well into 1955 because that’s how good it was.
“They [Indian Motorcycle] have done good,” Tuman added. “That bike gets better every time they take it out on the track. I’m happy to see Indian back at the races, and I think they’re going to be here for a long time to come.”

Who wants to argue with that stamp of approval?

Indian has clearly fired a serious shot in a sport that has been witnessing a revival over the past couple years, and now it is up to Harley-Davidson to respond. With that in mind, we’re almost excited about the potential war that will be waged in the 2017 American Flat Track series.

Scratch that. We’re more than excited!