The ageless Graham Jarvis comes out on top of the Red Bull Hare Scramble at the ErzbergRodeo.

The following was issued by Rockstar Energy Husqvarna Factory Racing:

Rockstar Energy Husqvarna Factory Racing’s Graham Jarvis claimed victory at the 22nd running of the ErzbergRodeo Hare Scramble. From a front row start Graham was well placed during the early, faster sections of the race. The hugely experienced former event winner then methodically worked his way into the lead with 30 minutes of the race completed.

Once out front and with the event’s well-known technical sections ahead of him, Jarvis never stopped extending his race lead to eventually reach the finish in a time of 2 hours and 19 minutes. Jarvis finished more than 33 minutes ahead of runner-up Cody Webb with third placed Alfredo Gomez a further three minutes behind.

Overall, it was a near perfect race for the now 41-year-old British rider. Always excelling when conditions are at their most difficult, Jarvis produced a world-class performance around the Iron Giant. Smooth, calculated and unrelenting, he took control of the race lead at a crucial moment in one of the forestry sections and never looked back. Crossing the finish line over 33 minutes clear of his nearest rival, Jarvis reminded everyone why he is one of the best extreme enduro riders in the world.

“This feels amazing,” Jarvis said. “Erzberg is a race I had marked out as one I wanted to win this year and I’ve done that. It was an amazing race – I got a good start and managed to start making my way forward through the pack. In one of the first sections in the woods I found a really good line and managed to get up a technical climb ahead of some of the others. After that I just tried to relax and do what I know I can do through the more technical sections. Everything went well but I knew I had to stay focused. This has been a real team effort.”

FIM SuperEnduro World Champion Colton Haaker competed in the ErzbergRodeo for the first time this year. Starting off his weekend on top form, Haaker placed an impressive 11th overall in the Iron Road Prologue to secure a place on the front row of the grid for Sunday’s Hare Scramble. Starting strongly, he then crashed on one of the first hill climbs, losing numerous positions. Pushing a little too hard to recover resulted in numerous further crashes and Haaker was unable to complete the race distance in the allotted four hours.

I got a good start, but then on one of the first climbs I crashed,” Haaker said. “That set me back a lot of places and from there on that theme would continue. It’s been a real eye opener for me doing this. It’s definitely something I’ve not really experienced before. Especially the forestry sections. They were so slippery and gnarly, we just don’t really have trees back home in California. But I’ve enjoyed the experience. I would have loved to finish but it is what it is.” 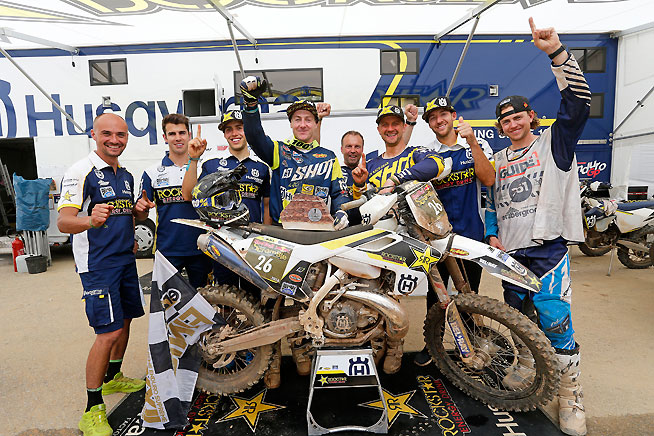