World Champion Antonio Cairoli will compete aboard the new Factory Edition 350SX-F in 2015.

Reigning FIM World Motocross Champion Antonio Cairoli was on hand at the EICMA Show in Milan, Italy, to unveil the new Factory Edition KTM 350SX-F, which he will use in his quest for a ninth FIM MXGP World Championship title.

No technical details were available at the show, although the new machine is reportedly 11 pounds lighter than the current 350SX-F. The engine appears to be significantly changed from the 2014 model, and the bike’s chromoly chassis, seat and bodywork have clearly been revised. KTM’s website only had the following to say: 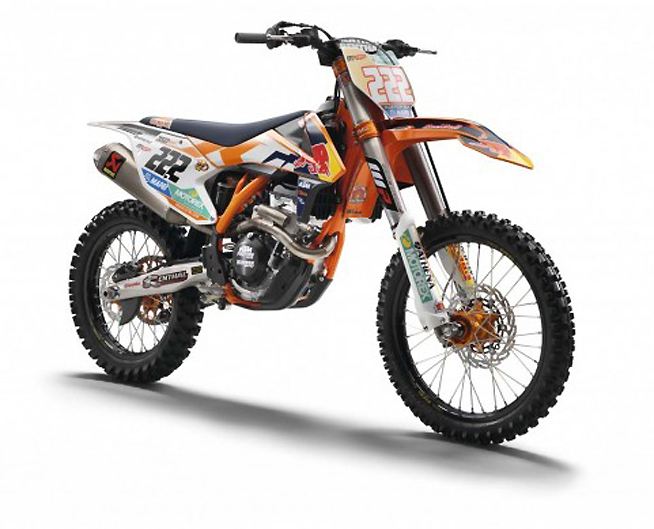 “Proof that the Ready To Race company does not rest on its laurels is the all-new MXGP competitor, the 350 SX-F Factory, shown in Milan as a premiere. Despite world dominance with MXGP and MX2 titles in 2014 along with the 450 AMA National Motocross title and many other national championships and wins, KTM’s R&D department—along with its Red Bull Factory riders—have developed an all-new vehicle.

“After the race is before the race. Still fully motivated to continue the leading role in the highly competitive MXGP class, hand-in-hand with the world champ himself and all-star Stefan Everts, KTM`s MX engineers took all efforts to put together the fastest package ever seen on a MXGP circuit.

“Based on an outstanding experience package, the decision was taken again for the proved 350cc formula. On top of that, using KTM’s proven knowledge in frame design, WP`s research and development skills and not to forget about the intense cooperation with KISKA design, Tony Cairoli will bring the all-new 350 SX-F Factory to the gate.”