LAS VEGAS, NV. (August 19, 2017)–Rockstar Husqvarna Factory racing-backed Colton Haaker fired first to take the win at round one of the 2017 AMA EnduroCross series inside the Orleans Arena in Las Vegas.

The defending AMA EnduroCross Champion, Haaker battled with FMF KTM-backed Cody Webb all night and managed to come out on top in the heat race, new bracket race and again in the all-important main event to take maximum points on the night. SRT Racing-backed Trystan Hart had an impressive night to take the final podium spot and land his first-ever podium.

There were several format changes for the 2017 EnduroCross series and a lot of riders trained hard in the off-season to close the gap on Haaker and Webb but the two most dominant indoor off-road racers were again the class of the field at round one. Webb set the fastest hot lap time during the afternoon qualifiers and often looked faster than Haaker during the evening racing, but Haaker always found a way to finish in front during the races.

The new format automatically places the top eight Super EnduroCross (pro class) riders from last season into the evening heat race, but all the other riders must earn a spot via a daytime qualifier. Those riders that qualified during the daytime then faced off in the first race of the night with the top five joining the top eight seated riders in a gate pick qualifying race. Beta’s Ty Cullins and fellow young gun Cooper Abbott on the Purvines/DA8 Yamaha topped Gas Gas-backed Geoff Aaron and Yamaha-mounted Eric Rhoten. Quinn Wentzel rode his Husqvarna to fifth to move forward for his first ever EnduroCross main event.

This put all of the top riders in the qualifier, and this would be the first time that Haaker and Webb would clash. As the two battled for the lead, Haaker put a hard block-pass on Webb and knocked him to the ground. Haaker went on to win while Webb recovered for second but was clearly unhappy about the contact. Kyle Redmond finished third in the qualifier to serve notice that he is ready to compete for podiums in 2017.

The new bracket racing format groups the top 12 riders into single lap head to head battles until the final two riders face off. As expected, Haaker and Webb moved forward to the end and put on another exciting fight with Haaker coming out on top and earning a single bonus point for the evening.

When the gate dropped for the main event, it was Webb in front and Haaker quickly made a few moves to get into second. The top two riders rode in unison until lap eight of 14 when Webb was the first to take the No Joke lane. This allowed Haaker to take the lead, and he tried to open a gap, but Webb closed back in and briefly took the lead before Haaker passed him back in the rock pile. Then the two made contact with Webb once again going down. This allowed Haaker to safely open a 10-second gap, but he still waited until the final lap to take the No Joke lane and safely claim the win.

“They dropped the gate about four seconds earlier than I expected and I got caught way off guard,” Haaker saod. “I came into the first turn not in first unlike I did in every other race tonight. My starts were on point for every race except the main. I moved into second quickly and started pacing Cody and he took the joker lane at about the midway point and I knew I needed to get a gap going. Unfortunately, I made a major mistake and, even though the track wasn’t as technical as some, Cody made a mistake, too. So, if two of the best riders in the world make mistakes it seems it was pretty hard, actually. I caught back up to Cody after my mistake and he left the door open a bit and somehow my foot went into his front wheel and he went down. I didn’t mean to put my foot in there, obviously. From there, all I could think about was hitting the joker lane. I did it on the last lap and got the win.”

Webb finished 12 seconds back, in second.

“The main event wasn’t ideal, but I’ve never been known to enjoy the faster tracks, and this was probably the easiest track EnduroCross has ever had,” Webb said. “I felt really great tonight and led for a bit. My plan was to have Colton lead with the pressure of taking the joker lane, and I was just going to hunt him down, and when we had to take the joker lane I would take advantage of it. But he got ahead of me when I made a mistake, then he crashed and I passed him momentarily, and eventually he moved over on me and his foot peg or something got stuck in my wheel, and I couldn’t hold the bike up. I went down, killed the motor, knocked my lever down too far, and by that point it was too late in the race to recover. My confidence feels great. I wasn’t pumped on the track when I walked it, and I’m looking forward to the rest of the series.”

The battle for third was a race-long affair between SRT Offroad teammates, Hart and Redmond. Hart held the position at the start before Redmond moved by only to be re-passed by Hart for the final podium spot. The two riders finished within one second of each other.

“For sure my good start was so key to the race for me,” Hart said. “I had a good gate pick, and the track wasn’t super hard, but it was super-fast and you couldn’t make a mistake. That made for some really tight racing between Kyle (Redmond) and myself for the entire time. It was super tiring even though the track wasn’t too hard. You had to be on it the entire time–it was really intense. I worked hard for this, and now that I’m up here it doesn’t feel real. Everybody always says that, but the last lap I thought, ‘This is it!’ Last year I was fourth in Boise and I felt like I threw third away a little. Now, it feels great to get it.”

Beta’s Max Gerston took fifth ahead of RPM KTM’s Ty Tremaine in sixth. SRT’s Cory Graffunder was seventh and Cooper Abbott took the important eight place position that will put him directly into the night show at the next round. Joan Pau Segura made the long trip from Spain and finished ninth on his Gas Gas ahead of fellow Gas Gas rider Noah Kepple in 10th.

Canada’s Shelby Turner, the defending Women’s EnduroCross champion passed Australia’s Tayla Jones on the final lap to take an exciting win. Jones crashed out of the lead and FMF KTM’s Kacy Martinez also snuck by for second while Jones recovered for third. There was a strong field of when riders and this looks to be an exciting championship.

In the Vet class, Destry Abbott, the off-road racing legend took the win despite going doing a maintenance round of chemotherapy earlier in the week for Leukemia, which he was diagnosed with a little over a year ago. Washington’s Davis Stirm was very satisfied to take second and Abbott’s close friend, Dan Hayakawa rounded out the podium.

Spenser Wilton took the Open Amateur class win on his Honda. Josh Greco, who has competed in AMA Supercross took second ahead of Zane Roberts.

In the new Amateur B class, Gavin Siegismund took the win over Drew Lehr and Holger Dettmann, who came all the way from Germany to compete in EnduroCross.

Round two of the 2017 AMA EnduroCross Series is set for the Reno-Sparks Livestock Events Center in Reno, Nevada, September 23. For more information, visit www.endurocross.com. 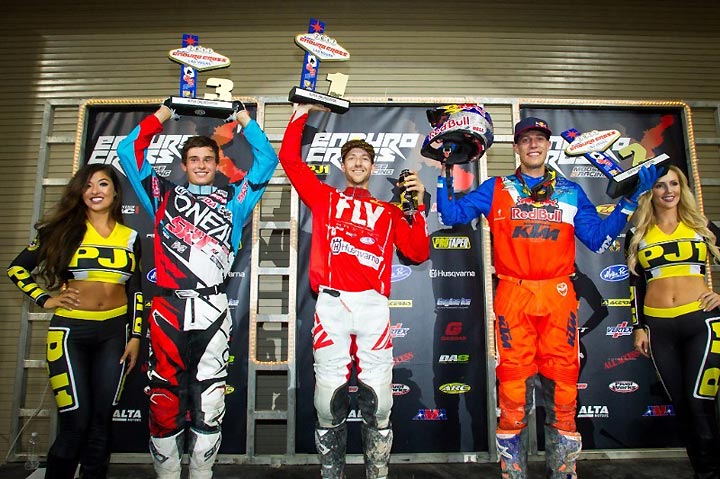