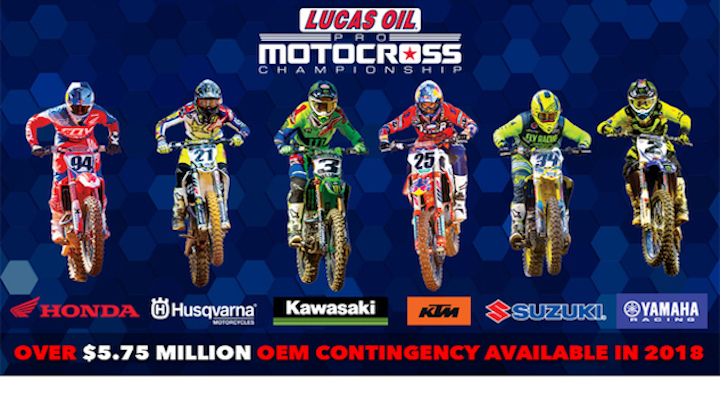 MORGANTOWN, WV – April 2, 2018 – With less than 50 days until the first gate drop of the 2018 season, MX Sports Pro Racing has announced that $6.5 million in prize money and contingency will be on the line for the world’s fastest racers in this summer’s Lucas Oil Pro Motocross Championship, sanctioned by AMA Pro Racing. Thanks to the incredible support of the six competing manufacturers, the combined total of OEM contingency and pro purse results in a record sum of prize money for the world’s most prestigious off-road motorcycle racing championship.

Anchored by the factory and factory-supported efforts of Honda, Husqvarna, Kawasaki, KTM, Suzuki, and Yamaha, the 40-rider fields in both the 450 Class and 250 Class will compete for a share of $5.79 million in OEM contingency. Additionally, nearly $1 million in pro purse money will be available.

“We here at the Lucas Oil Pro Motocross Championship and the entire racing community are fortunate to have such an incredible commitment from our manufacturers,” said Davey Coombs, President of MX Sports Pro Racing. “Their support of the championship and its exceptionally talented athletes is a testament to the strength of the sport and its popularity. Its also a sign of the vital role Pro Motocross plays in the overall health of the motorcycle industry, and the influence the success of our riders has on consumers.”

Defending 450 Class Champion Eli Tomac (Monster Energy Kawasaki) and his title-holding 250 Class counterpart Zach Osborne (Rockstar Energy Husqvarna Factory Racing) will lead the most talented riders on the planet into action on Saturday, May 19, with the Hangtown Motocross Classic. A total of 12 championship rounds will visit the most legendary and iconic racetracks in the country, visiting a total of 11 states on the path to crown a pair of champions at the Ironman National on Saturday, August 25.

Tickets to each round of the 2018 Lucas Oil Pro Motocross Championship on now on sale and can be purchased by visiting ProMotocross.com.