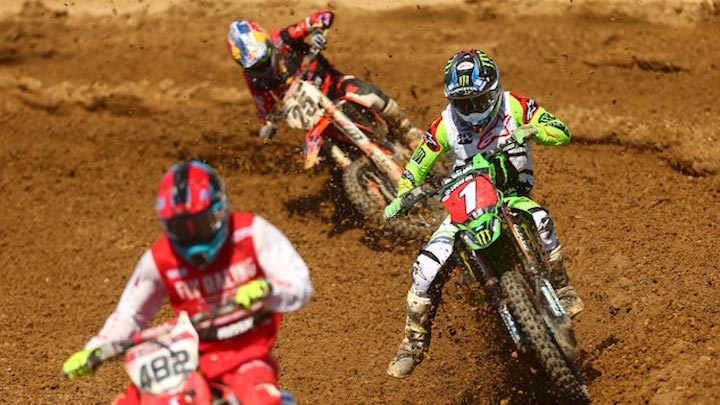 Monster Energy Kawasaki Eli Tomac’s undefeated moto streak may have been broken this weekend, but the Colorado native was still able to take home the overall with a 2-1 finish. Red Bull KTM’s Marvin Musquin took home second, and Justin Barcia third. The biggest story of the weekend, however, was possibly Justin Hill’s 450 outdoor debut, in which he took home a fifth overall with 4-6 finishes. Hill has struggled this year both in the Outdoor Nationals and Supercross on a 250 despite being the 250 West Supercross defending champ. It seems he performs and rides much better every time he swings a leg over a 450.

Aaron Plessinger swept the 250 class and took back the red plate. Jeremy Martin was en route to winning the overall and extending his points lead, but a mechanical failure while leading the second moto caused a DNF, which allowed Plessinger by for the win.

MT. MORRIS, PA – June 16, 2018 – The Lucas Oil Pro Motocross Championship, sanctioned by AMA Pro Racing, made its first trip to the east coast on Saturday for the fourth round of the 2018 season. The Red Bull High Point National from High Point Raceway has become a Father’s Day tradition, and fittingly a pair of riders following the racing lineage of their fathers triumphed at the famed facility. While it wasn’t easy, Monster Energy Kawasaki’s Eli Tomac withstood his stiffest challenge to date in the 450 Class to capture his fourth straight victory. In the 250 Class, Monster Energy/Yamalube/Star/Yamaha’s Aaron Plessinger earned an unlikely 1-1 sweep for his second win of the season, which allowed him to regain control of the point lead.

With his perfect 6-0 record and commanding point lead entering the race, Tomac emerged with his first Motosport.com Holeshot of the season in the opening 450 Class moto, ahead of Team Red Bull KTM Factory Racing’s Marvin Musquin and Monster Energy/Yamaha Factory Racing’s Justin Barcia. A first-turn crash took several other top competitors out of contention early, including Team Honda HRC’s Ken Roczen and RMATV/MC-WPS-KTM’s Blake Baggett, the fastest qualifier. Both riders got back into action and completed the opening lap in 31st and 33rd, respectively.

Out front, Tomac sprinted out to an early lead while Barcia applied pressure on Musquin for second. The Yamaha and KTM-mounted riders almost made contact on several occasions, but Barcia ultimately prevailed when Musquin went off track. That battle allowed Tomac to establish a multi-second lead, but it was short lived. Musquin regrouped and successfully repassed Barcia for second. He kept Tomac in his sights with slightly quicker lap times and continued to chip away at Tomac’s lead. It wasn’t long before Musquin had closed to within a few bikes lengths and began to look for ways around Tomac. As they worked through lapped traffic Musquin took advantage of faster lines to get alongside Tomac and make a pass around the outside with just six-and-a-half minutes left in the moto.

Once out front Musquin continued to pull away from Tomac and brought the defending champion’s moto winning streak to an end. Musquin took his first checkered flag of the season 5.4 seconds ahead of Tomac, while Barcia finished a distant third. Autotrader/Yoshimura/Suzuki Factory Racing’s Justin Hill finished fourth in his first ever 450 Class moto, while Baggett battled all the way back to finish fifth. Roczen finished just a couple spots behind that in seventh.

When the gate dropped on the second moto Roczen put his Honda out front with his first Motosport.com Holeshot, narrowly beating out Tomac and a hard-charging Musquin. Musquin was able to slip under Tomac for second, but as he went to pressure Roczen the Honda rider bobbled, slowing the momentum of both riders and allowing Tomac to move past on the outside. Roczen countered Tomac’s pass attempt and maintained his hold of the lead, while Musquin was forced to settle into third.

Just a short time later Roczen made another costly error, carrying too much speed into an off-camber corner and running off track. This allowed Tomac to slip by and assume control of the lead, while Roczen got back on track in second. That presented an opportunity for Musquin to apply pressure on Roczen, and after a couple laps of following the German, the Frenchman made his move to take over the position.

With his rival and primary challenger for the overall win behind him, Tomac picked up the pace in defense of Musquin’s prowess on the highly technical track. Despite his best efforts Tomac still lost time to the Frenchman and as the moto wore on the two rivals continued to inch closer and closer to one another. As they navigated through lappers the distance between Tomac and Musquin stabilized, but with just over a minute remaining Musquin picked up the pace and closed in on Tomac’s rear fender. Tomac defended by protecting the inside line in virtually every corner, and he also used lapped riders to his advantage, getting by with ease while Musquin occasionally got held up. On the final lap both riders let it hang out. Musquin got alongside Tomac on two different occasions, but since the KTM rider didn’t have the preferred line Tomac maintained the advantage and held off the Frenchman through to the finish.

Tomac took the win by 1.7 seconds over Musquin, while Roczen followed more than a minute behind in third.

By virtue of his second moto win Tomac (2-1) earned the tiebreaker over Musquin (1-2) in the overall classification, securing his fourth straight victory this season and the 13th of his career. Barcia finished third overall (3-5).

Tomac now sits in a tie for 10th on the all-time wins list with Jeff Ward.

“[Today] was good. I was able to get out front early so I didn’t have to deal with a lot of roost. This track always has a tendency to get rough, so it was good to make things easier on myself [by getting good starts],” explained Tomac. “The first moto was tough. I wasn’t as good as Marv [Musquin] in that one. I was fighting myself and wasn’t flowing. I regrouped and got closer [in Moto 2], but Marv was still all over us. We were just able to hold him off.”

Tomac remains 28 points ahead of Musquin in the 450 Class standings, while Barcia maintains his hold on third, 57 points out of the lead.

In the opening 250 Class moto Monster Energy/Yamalube/Star/Yamaha’s Justin Cooper grabbed his second Motosport.com Holeshot of the season, edging out his teammate Plessinger while point leader Jeremy Martin settled into third aboard his GEICO Honda. A surging Plessinger blew by Cooper to seize control of the lead, but the rookie battled back. Plessinger got the upper hand and cleared his teammate, while Martin closed in on Cooper from third.

Plessinger’s unparalleled pace allowed him to consistently add to his lead, which soon grew to multiple seconds. Cooper was then left to fend off a determined Martin, who embarked on an endless pursuit for second that lasted for nearly 20 minutes of the 30-minute-plus-two-lap moto. Every time Martin appeared to have the edge Cooper responded and put multiple bike lengths between them. However, with just over 10 minutes remaining Martin made an impressive inside move on the rookie to take control of the runner-up spot, but at that point he faced a double-digit deficit to Plessinger.

Plessinger enjoyed a dominant first moto and earned his class-leading third win of the season, 7.6 seconds ahead of Martin. Cooper followed in third, with Monster Energy/Pro Circuit/Kawasaki’s Austin Forkner in fourth and Troy Lee Designs/Red Bull/KTM’s Jordon Smith in fifth.

A wild second moto got underway with Cooper out front yet again, sweeping both Motosport.com Holeshots. Martin slotted into second, with Forkner in third, while Plessinger started inside the top five. A determined Martin applied immediate pressure on Cooper, which forced the rookie into a mistake as he jumped off the side of the track. That allowed Martin to assume the lead unchallenged, while Cooper got back on the track in second.

With a clear track ahead of him Martin sprinted out to a comfortable lead, leaving the rest to battle for the remaining spots on the podium. Forkner was able to pass Cooper for second, but the Yamaha rider eventually reclaimed the position. Their continued fight allowed Plessinger to close in from fourth and ignite a multi-rider battle for the position. In the ensuing battle Forkner moved back around Cooper for second, and Plessinger took advantage to take over third. Plessinger didn’t waste time to get around Forkner and move into second. At this point Martin was more than 10 seconds ahead of the field.

Just past the halfway point of the moto Martin lost power on his Honda and was forced to stand in the middle of the track holding the bike up, in search of a solution. As Martin stood still Plessinger and everyone behind him rode past. Martin pushed his bike to the mechanics area and recorded a DNF, giving up what seemed like a sure victory, and his spot atop the championship standings.

Plessinger led the final portion of the race while Forkner was forced to battle with Monster Energy/Yamalube/Star/Yamaha’s Dylan Ferrandis, who was making his season debut, for second. Plessinger took a surprising win, and capped off a 1-1 sweep, by crossing the line 2.1 seconds ahead of Forkner, who narrowly edged out Ferrandis. Martin’s misfortune resulted in a shakeup of the overall classification, with Forkner also finishing second overall (4-2) and Cooper rounding out the podium in third (3-4).

It was the fourth career win for Plessinger. It’s the first time in his career that he’s won multiple races in a season.

“We had a really good day at Glen Helen, but then my bike didn’t really work well in Colorado. We did some testing during the off week and I think it showed today,” said Plessinger. “We got some good starts and I was able to ride my own race. In the second moto I worked my way to the front and then something happened to Jeremy’s [Martin] bike, so we ended up with 1-1 finishes.”

The win, combined with Martin’s 10th-place finish (2-33), moved Plessinger back atop the point standings where he will have sole possession of the red plate for the first time. He sits 20 points ahead of Martin, who dropped just one position to second. Troy Lee Designs/Red Bull/KTM’s Alex Martin is third, 30 points out of the lead.

The 2018 Lucas Oil Pro Motocross Championship will continued next weekend, on Saturday, June 23, with its annual visit to the southeast and Muddy Creek Raceway in Blountville, Tennessee. First motos of the Tennessee National can be seen live on MAVTV at 10 a.m. PT / 1 p.m. ET. Second motos will follow, live on NBC Sports Network at 12:00 p.m. PT / 3:00 p.m. ET. Additionally, all of the action can be seen as it unfolds online via the “Pro Motocross Pass” on the NBC Sports Gold app.