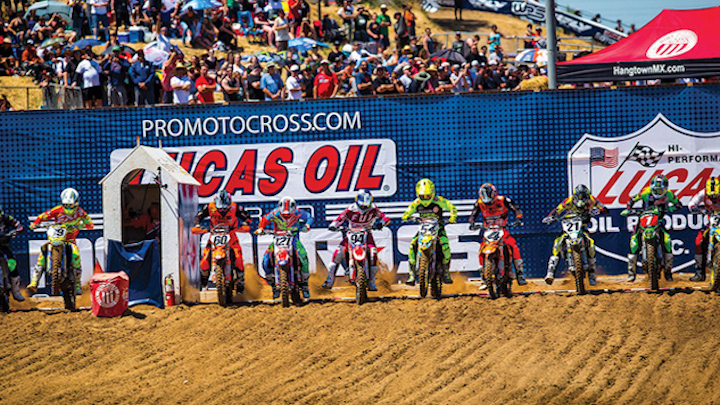 RANCHO CORDOVA, CA – May 20, 2018 – The 2018 Lucas Oil Pro Motocross Championship, sanctioned by AMA Pro Racing, got underway on Saturday under clear and sunny skies for the landmark 50th running of the Red Bull Hangtown Motocross Classic at Prairie City SVRA. In the premier 450 Class, reigning champion Eli Tomac put forth an impressive come-from-behind effort to sweep the motos and capture back-to-back opening round victories. In the 250 Class, defending champion Zach Osborne duplicated his efforts from a year ago at Hangtown and picked up right where he left off last season with a dominant sweep of the motos aboard his Rockstar Energy Husqvarna Factory Racing machine.

The 450 Class started its first moto of the season with Team Honda HRC’s Christian Craig capturing the Motosport.com Holeshot over Rockstar Energy Husqvarna Factory Racing’s Jason Anderson. Team Red Bull KTM Factory Racing’s Marvin Musquin slotted into third, while Tomac was forced to battle his way from a start deep inside the top 10. Thanks to a slew of aggressive passes, Tomac was able to complete the opening lap in fifth.

Craig’s hold on the top spot lasted just a single lap as Anderson, the newly crowned AMA Supercross Champion, stormed into the lead. As this unfolded, Tomac was still gaining positions and got by Musquin to take over third. The Frenchman regained the position on the next lap as Tomac looked to get around Craig. Both riders successfully passed the Honda rider on the same lap and positioned themselves behind Anderson.

Anderson’s pace wasn’t quite at the level of his rivals, and it didn’t take long for both Musquin and Tomac to go by and take over the top two spots. Musquin maintained a lead of about a second on Tomac for several laps until an off-track excursion allowed Tomac to move into the top spot with ease. Musquin returned to the track in second. The KTM rider tried to keep Tomac within reach for a couple laps, but the champ gradually extended his advantage as the moto wore on.

As the field stormed out the gate to start Moto 2 it was Autotrader/Yohsimura/Suzuki Factory Racing’s Phil Nicoletti who captured the Motosport.com Holeshot over Anderson and moved into the early lead. Barcia took advantage of a strong start as well to get around Anderson and then Nicoletti, and completed the opening lap out front. Behind him, both Musquin and Tomac were mired in traffic with the Frenchman starting seventh and the champ coming around in 10th.

Tomac got sight of Musquin and latched on to his rear fender as they looked to charge through the field. Out front, Barcia looked to sprint to a lead over Anderson, who passed Nicoletti for second and brought Team Honda HRC’s Ken Roczen with him into third. Sensing his opportunity, Anderson surged past Barcia to lead for the second time in the afternoon.

Musquin was able to navigate his way forward quicker than Tomac and he surged into podium position past Roczen on Lap 4. Just a lap later he got around Barcia for second and set his sights on Anderson as Tomac battled with Roczen. The Kawasaki rider eventually moved into fourth and pushed to catch Barcia. Tomac stepped up his pace to work his way around the Yamaha rider on Lap 6, but he fell shortly thereafter in pursuit of Musquin and dropped back to fourth.

Out front Anderson continued to lose ground to Musquin and soon the KTM rider was mounting a challenge for the lead, successfully seizing control of the moto on Lap 7. Tomac recovered from his mistake to get back around Barcia, and then made an easy pass on Anderson not long after that. Just about two seconds separated Musquin and Tomac when they finally moved into first and second, but Tomac was relentless and easily closed in on the KTM. After a few defensive maneuvers by Musquin, Tomac used an outside line to get alongside the Frenchman and pushed him wide in the next corner to take the lead at the tail end of Lap 8. From there the Kawasaki rider checked out over the closing phase of the moto.

Tomac easily capped off a sweep of the motos by crossing the line 6.3 seconds ahead of Musquin. Barcia finished third after Anderson dropped several positions late.

Tomac is the first rider since Chad Reed in 2010 & 2011 to win back-to-back Hangtown Classics. His four consecutive moto wins at the famed facility are the most since Ricky Carmichael won five in a row from 2003-2005. Musquin landed second overall on the heels of back-to-back runner-up finishes, while Barcia’s 3-3 scores gave him his first podium finish since the final round of the 2016 season.

It was the 10th win of Tomac’s career.

“It’s awesome (to start with a win), but it wasn’t an easy day at all,” said Tomac. “The second (moto) start was not good at all, but luckily I was able to get to the front quick. I had a little tip over too, but overall I felt really good on my motorcycle. It’s easy to have days like today when you’re that comfortable on the bike.”

Tomac has established a six-point lead over Musquin in the initial 450 Class standings by virtue of his sweep.

The opening 250 Class moto of the season saw Monster Energy/Pro Circuit/Kawasaki’s Austin Forkner nab the Motosport.com Holeshot, only to be passed by Monster Energy/Yamalube/Star/Yamaha’s Justin Cooper. Behind them, GEICO Honda’s Jeremy Martin and Osborne jockeyed for third.

In just his fourth start as a pro, Cooper stormed out to a healthy lead over Forkner, who soon came under pressure from Martin and Osborne. As the battle for second continued, it allowed Osborne to close in and make his way around both riders in one lap, jumping from fourth to second. In his effort to keep pace with Osborne, Martin tipped over but was able to remount quickly and lose just one spot to Forkner.

Out front, Osborne closed his deficit to Cooper and made the pass after a couple laps of heavy pressure. Once in front, he pulled away. While Osborne extended his gap, Cooper, Forkner, and Martin got closer and closer to one another. Eventually, Forkner made the move to take over second and was followed by Martin into third that same lap. On the following lap, Martin got around Forkner to take over second. The lead duo established themselves up front while Forkner fell into the clutches of a hard charging Aaron Plessinger late in the moto. Plessinger was able to take advantage of a mistake by Forkner on the final lap to steal third aboard his Monster Energy/Yamalube/Star/Yamaha.

When the gate dropped on Moto 2 it was Martin who put himself in a position to challenge for the overall by securing the Motosport.com Holeshot over Plessinger. However, the Yamaha rider got a run through the first turn and moved into the lead briefly until Martin reclaimed the position with an aggressive pass at the tail end of the opening lap. Osborne got a strong start of his own and took advantage of Plessinger as well to take over second the following lap. Troy Lee Designs/Red Bull/KTM’s Alex Martin followed suit and moved into third.

Jeremy Martin’s comfortable lead was short lived, as Osborne closed in and the pair of titleholders waged a captivating battle. Osborne got the upper hand briefly, but Martin countered, only to have Osborne get it back again, this time for good. With a clear track ahead of him, Osborne set sail and forced Martin to settle into the runner-up spot.

Both Osborne and Martin went unchallenged for the remainder of the moto, with Osborne taking the checkered flag 4.5 seconds ahead of the Honda rider. Alex Martin finished in a distant third, just ahead of Plessinger.

Osborne became the third rider in the past eight seasons to win back-to-back Hangtown Classics, and it’s his second straight 1-1 sweep at the season-opening round. Jeremy Martin’s pair of runner-up scores gave him second overall, while Plessinger finished third at this event for the second consecutive season (3-4).

The win was the seventh of Osborne’s career.

“It ended up being a good day. I was super nervous this morning for some reason, but I got more comfortable in practice and then in the motos I was able to make some good passes,” said Osborne. “I actually had two solid starts so it was good to capitalize on those and come away with two moto wins and the overall. My confidence is definitely much higher heading into next weekend.”

With his perfect score of 50 points, Osborne has established a six-point lead over Martin in the 250 Class standings.

The 2018 Lucas Oil Pro Motocross Championship continues next Saturday, May 26, with its second round from Glen Helen Raceway in San Bernardino, California. First motos of the Giant RV Glen Helen National, presented by Malcolm Smith Motorsports, can be seen live on MAVTV at 1 p.m. PT / 4 p.m. ET, while second motos will air live on NBC Sports Network at 3 p.m. PT / 6 p.m. ET. Additionally, all the action can be seen as it unfolds online via the “Pro Motocross Pass” on the NBC Sports Gold app.