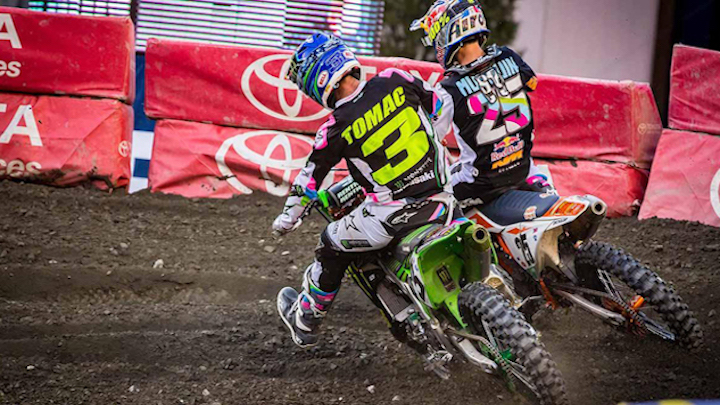 FOXBOROUGH, MA – April 21, 2018 – Monster Energy AMA Supercross, an FIM World Championship, returned to Gillette Stadium after a two-year hiatus for Round 15 in front of 38,404 fans.

Team Red Bull KTM Factory Racing’s Marvin Musquin dominated the first 22 laps of the Main Event until Monster Energy Kawasaki Racing’s Eli Tomac made his move and found the lead before the white flag. Musquin returned on the last lap with a race-winning pass to take the overall victory.

“That’s for the win. I was leading the whole Main Event,” Musquin said on the podium. “It was a great race. The lappers were tough to get around, and the track was really, really difficult … It’s for a 450 AMA Supercross Main Event win, so I tried my best, and that’s the way it is. My riding was really good today, so I’m happy about that.”

Rockstar Energy Husqvarna Factory Racing’s Jason Anderson rounded out the podium after a third-place start and holds a 34-point lead heading into the second-to-last race of the season in Salt Lake City.

In the penultimate round of the Eastern Regional 250SX Class Championship, Rockstar Energy Husqvarna Factory Racing’s Zach Osborne earned his seventh-career victory and first lead-from-the-start Main Event win of the season ahead of Troy Lee Designs/Red Bull/KTM’s Jordon Smith and Autotrader/Yoshimura/Suzuki Factory Racing’s Kyle Peters, who earned his first podium since 2013 with a third-place finish. GEICO Honda’s Jeremy Martin battled from a dead-last start and hammered his way up to fourth place after the 17-Lap Main Event. Osborne holds a 15-point lead heading into the Dave Coombs Sr. East-West Showdown at the season finale in Las Vegas.

“I’ve worked really hard to find some consistency in the way I do my starts,” Osborne said on the podium. “I broke it down to a very, very basic level with some help from my team and my trainer and also even my father-in-law. It’s been a huge help for me, so to come out tonight and get two holeshots and win a Main Event feels great. It’s a beautiful day here in Foxborough.”

The 2018 Monster Energy Supercross season continues in Salt Lake City with the penultimate Round 16 on April 28 at The University of Utah’s Rice-Eccles Stadium. Watch the action live on FOX at 5:30 p.m. ET.